THE MORAL AND INTELLECTUAL BANKRUPTCY OF THE REPUBLICAN PARTY... 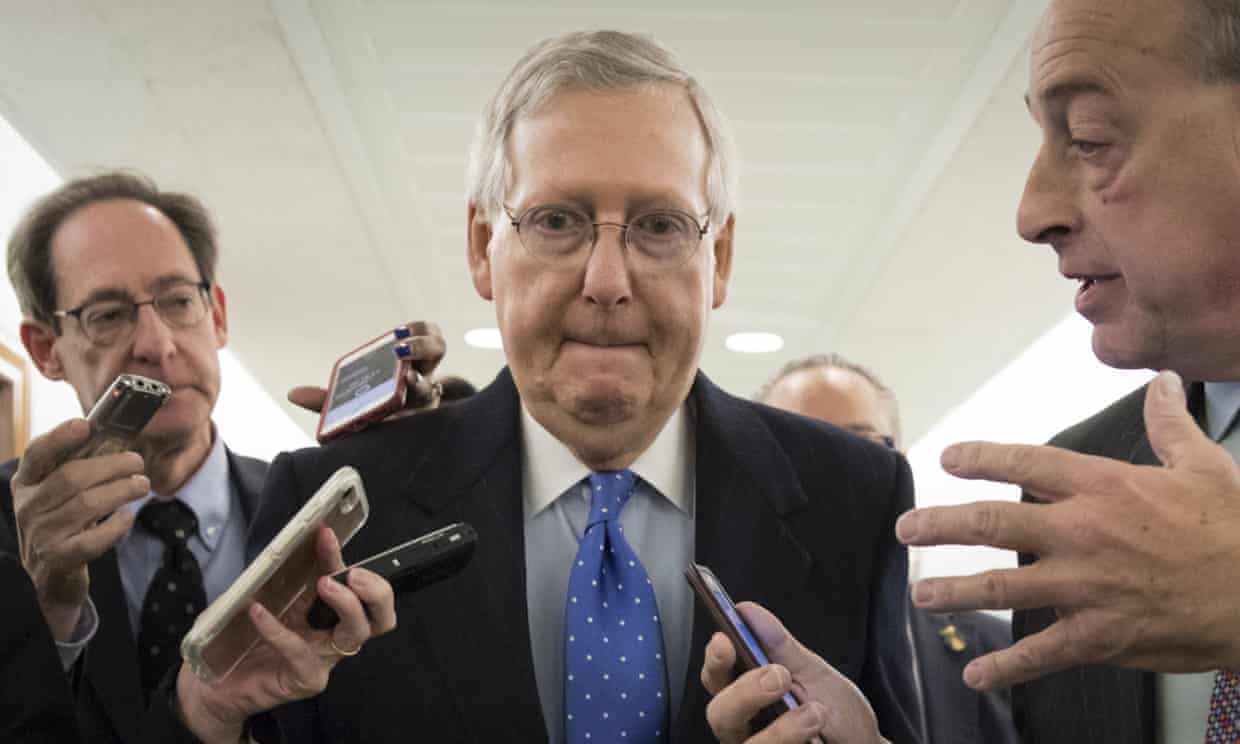 The parallels between the Republican Party positions on taxes and climate change are striking. Both are morally appalling and reject the available evidence and expert opinion.

The Initiative on Global Markets’ panel of economic experts was recently asked about the Republican tax plan. Among the experts who took a position either way, there was a 96% consensus that the plan would not substantially grow the economy more than the status quo, and a 100% consensus that it would substantially increase the national debt. 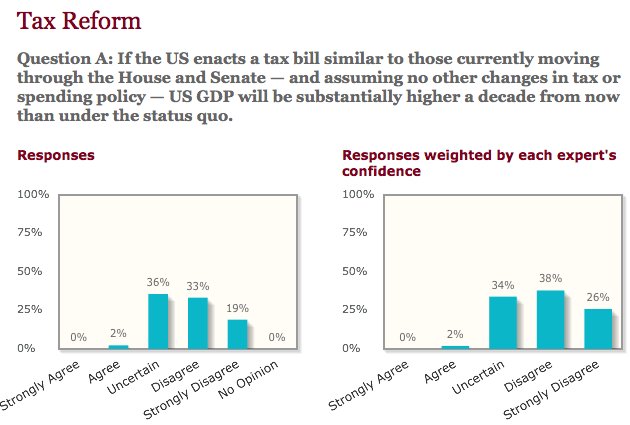 The House and Senate Republicans have passed similar versions of their tax bill, and neither chamber is allowing any climate policy to move forward.

Unwavering faith in the face of contradictory facts

Sometimes tax cuts make sense; for example, when trying to stimulate a depressed economy, or when operating with a budget surplus. Neither is currently the case. This message from the president:

Unemployment is down to 4.1%, lowest in 17 years. 1.5 million new jobs created since I took office. Highest stock Market ever, up $5.4 trill

Is incompatible with Senator Lindsey Graham saying “the economy needs a tax cut.” The tax cut plan, which by design will increase the US national debt by $1.5tn, is also incompatible with Republican opposition to increased deficits. Just last year the Republican National Committee was warning of “an unsustainable path toward crippling debt.”

Economists also agree that we should be paying down the debt when the economy is going strong. When the next recession inevitably strikes, governments need monetary flexibility to respond. That’s when it makes sense to run a deficit (for example, see the 2009 stimulus package, which helped pull the US out of the Great Recession and cost less than the Republican tax plan).

These Republican economic contradictions make no sense, but they’re familiar to those of us who follow climate change news. The only consistency in climate denial is in its contradictions – deniers claim global warming isn’t happening, but it’s a natural ocean cycle, and caused by the sun, and galactic cosmic rays, and Jupiter’s orbital cycles, and it’s really just a Chinese hoax, and in any case it’s not bad.

On taxes, the Republican argument is cuts pay for themselves by stimulating economic growth and creating jobs.

“This is not going to be a deficit-producing effort,” McConnell says, believing economic growth will pay for bill.

But the economic literature is far from clear about whether tax cuts necessarily spur economic growth at all, let alone enough to pay for themselves. Moreover, corporate CEOs have repeatedly said that the Republican tax plan won’t spur investment or job creation – instead they’ll mostly pass the gains to their wealthy shareholders. There was an embarrassing video clip when Trump economic adviser Gary Cohn was confronted with this inconvenient truth:

VIDEO: CEOs asked if they plan to increase their company's capital investments if the GOP's tax bill passes.
A few hands go up.
"Why aren't the other hands up?" Gary Cohn asks.#WSJCEOCouncil

VIDEO: CEOs asked if they plan to increase their company's capital investments if the GOP's tax bill passes.
A few hands go up.
"Why aren't the other hands up?" Gary Cohn asks.#WSJCEOCouncil pic.twitter.com/TD2oAlN27S

When presented with the nonpartisan congressional Joint Committee on Taxation analysis concluding the bill would increase the national debt by over $1tn even when accounting for associated economic growth, Republicans immediately rejected the results.

In NPR interview, Paul Ryan said he “thinks” the tax cuts will pay for themselves despite analysis to the contrary. “I’m telling you that’s what I believe will happen. I’m not going to tell you I’m sure.” https://t.co/CdXtuJmf0P

As Nobel-winning economist Joseph Stiglitz said, “Either it’s a religious belief, a belief where no amount of evidence would change that, or they are using the argument cynically and they just want more money for themselves.” He was talking about trickle-down economics, but just as easily could have been describing climate denial.

A growing disdain for nerds

I’m old enough to remember when the GOP considered itself the party of intellectuals, back in the days when Republicans invented the concept of pollution cap and trade systems, for example. It wasn’t long ago that party leaders like Newt Gingrich and 2008 GOP presidential candidate John McCain were calling for the party to support climate policies.

Starting with the brief rise of the Tea Party in 2010, that all changed, and the intellectual rot of the GOP has accelerated under President Trump. In a July 2017 Pew poll, just 36% of Republicans said colleges and universities have a positive impact on America, and a stunning 58% said they have a negative effect. 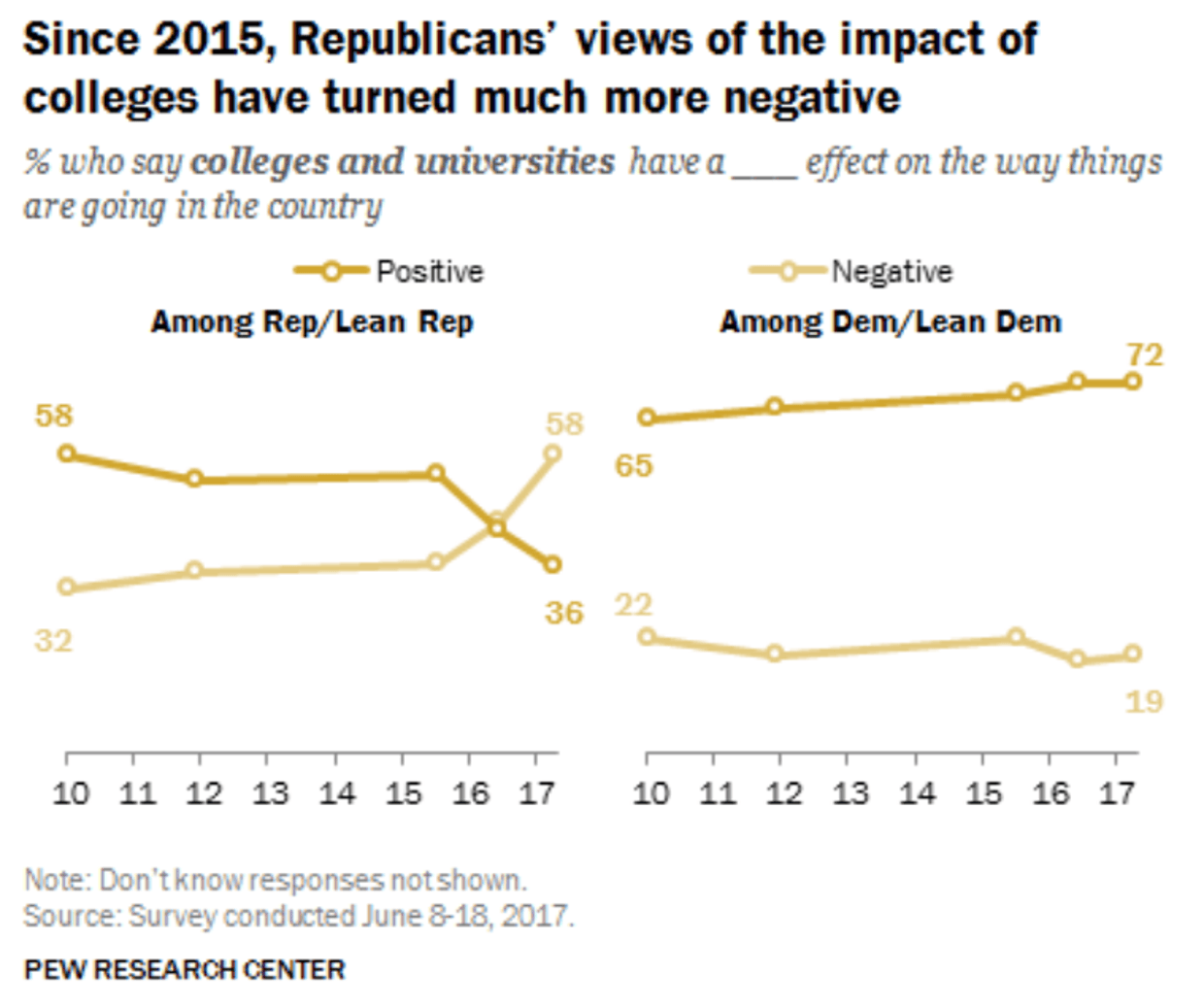 Republicans’ view of the impact of colleges and universities.

Similarly, in an August 2017 Gallup poll, just 33% of Republicans expressed confidence in higher education. Worst of all, the Republican tax bill even penalizes American graduate students.

Eating away at the GOP intellectual core: Fox News

A 2012 survey found that Americans who only watch Fox News are less informed than Americans who watch no news at all. At the time, 55% of Americans including 75% of Republicans reported watching Fox News. The network is powerful – a recent study found that Fox News might have enough influence to tip American elections – and on the whole it prioritizes ideological messaging over factual accuracy.

The US is experiencing a deep epistemic breach, a split not just in what we value or want, but in who we trust, how we come to know things, and what we believe we know — what we believe exists, is true, has happened and is happening … the right has created its own parallel set of institutions, most notably its own media ecosystem … “conservative media is more partisan and more insular than the left.”

Truth papered over by lies

Because so many conservatives rely on right-wing media sources for their news, it’s easy to misinform them through a constant stream of lies.

For example, Trump’s Treasury Secretary Steve Mnuchin promised that his department would produce an analysis showing that the tax cuts will pay for themselves. One economist in the department leaked to the New York Times that such an analysis doesn’t exist and Treasury staffers weren’t even asked to study the issue. It was a lie. Mnuchin also claimed the plan would only raise taxes on Americans who earn more than $1 million a year – the exact opposite of reality and another blatant lie. In fact, the entire Republican case for their tax plan was based on lies.

Similarly, climate denial is based on endless myths and misinformation – Skeptical Science has catalogued and debunked about 200 of them. And recent research showed that these myths are quite effective at misinforming their audience.

Republicans including Trump cited a list of 137 economists supporting tax reform, but further investigation showed the list is full of ghosts, office assistants, Koch employees, and many others who failed to mention they’re retired. The climate change equivalent is the Oregon Petition, whose signatories included Spice Girls and fictional characters among its fake experts.

Money and power – the root of all evil

The Republican tax plan and the party’s obstruction of climate policies are nevertheless both unpopular positions. Just 25% of Americans support the tax plan, though that includes 60% of Republican voters.

Similarly, 80% of Americans - including 62% of Trump voters - agree that the US should regulate and/or tax carbon pollution. But public support often doesn’t translate into policy, and Republican policymakers have been surprisingly honest and forthright about why they support the tax plan despite opposition by a majority of voters and economic experts:

.@RepChrisCollins (R-NY) on tax reform: "My donors are basically saying, 'Get it done or don’t ever call me again.'"

The plan also raises taxes soonest and most on poorer Americans, slashes their health care coverage, and Republicans are already planning to pay for the plan by cutting social programs that low-income Americans rely on. While massive income inequality is one of the biggest problems in America, squashing the ‘American dream,’ Republicans voted to make the problem much worse. Similarly, poorer countries are the most vulnerable to the consequences of climate change. The Republican Party motto may as well be ‘benefits for the rich at the expense of the poor.’

Quite simply, Republican politicians need campaign donations from oil companies and other big corporations to win elections. To maintain their power they must keep the cash flowing. That means keeping rich donors happy by cutting corporate taxes and obstructing climate policies. To achieve that, Republican politicians reject scientific evidence and expert opinion, lie to their voters, and rely on right-wing media echo chamber propaganda and tribalism to keep their supporters voting against their own best interests.

It’s all morally reprehensible, and so far, it’s working. At this point, the only way to fix the problem is to defeat the Republicans who have rotted their party to its core and are now spreading that rot throughout America and the rest of the world.