THE OCEANS ARE HEATING UP MORE RAPIDLY THAN WE THOUGHT. WHY THAT MATTERS... 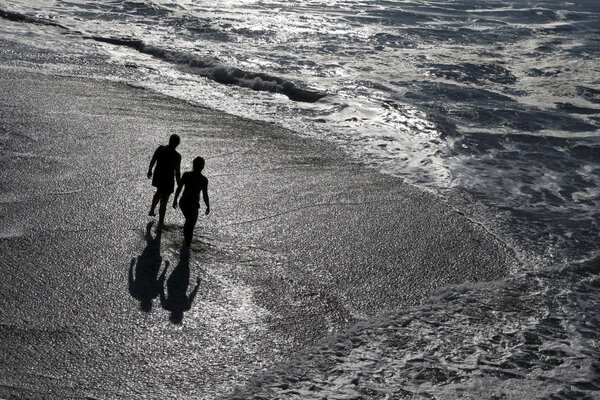 Vacationers cool off in the Pacific Ocean in Vina del Mar city, Chile, in this January 15. The world's oceans appear to be absorbing more heat from global warming than previously thought, according to research published Monday in the journal Nature Climate Change. But a new study that culled data from the 1870s British research ship Challenger's archives, and from modern Rodrigo Garrido/Reuters


The deep ocean has warmed as much in the past two decades as it did in the previous 100 years, researchers found...


Heat energy from man-made global warming is being absorbed faster and deeper into the depths of the world's oceans than previously calculated, a study released Monday shows.

It has long been acknowledged by the scientific community that more than 90 percent of the heat energy from burning fossil fuels goes into the world's oceans rather than the ground or atmosphere, and that ocean temperatures have gone up in recent years. But a new study culled data from the 1870s British research ship Challenger's archives, and from modern underwater monitors and computer models to create a timeline for just how much man-made heat has been buried in the oceans over the last 150 years.

Tackling the issues that most impact the environment today

Since 1997, Earth's oceans have absorbed man-made heat energy equivalent to a Hiroshima-style bomb being exploded every second for 75 straight years, the Associated Press reports.

In Pictures 24 bizarre creatures of the deep

"The changes we're talking about, they are really, really big numbers," said study co-author Paul Durack, an oceanographer at the Lawrence Livermore National Lab in California, in an interview with the AP. "They are nonhuman numbers."

"After 2000 in particular the rate of change is really starting to ramp up," Mr. Durack said.

Because the research team used computer models to fill in gaps where there are decades of bad data, the overall figures are "rough" but still reliable, according to the study's authors. But both the authors and outside experts say it's not the data that bothers them, it's the rate at which the numbers are increasing.

“As the upper oceans have been warming over time, more and more of this heat is finding its way down into the deeper ocean, and our results indicate that the fractional amount of heat that is trapped in the deeper ocean is increasing as well,” said lead author Peter Gleckler, a climate scientist at Lawrence Livermore, in an interview with the Washington Post.

Tackling the issues that most impact the environment today

“We find that the heat uptake of the global oceans has doubled since about 1997, compared to what took place prior to that over the industrial era. And that was a surprising result to us,” he added.

The immensity and relative chill of the world's oceans mean the absorption of even a few tenths of a degree of warming has serious consequences for Earth's energy balance, Gleckler and his colleagues said. When oceans bear the brunt of taking in man-made heat, it stops the surface from getting even warmer from the heat-trapping gases spewed by the burning of fossil fuels.

Over time however, as the oceans get warmer at depth they will take in less heat. This means warming stays in the air and on land surface, and the 90 percent absorption from the oceans starts to fall, said study co-author Chris Forest of Pennsylvania State University.

Jane Lubchenco,, a marine sciences professor at Oregon State University, and the former chief of the National Oceanic and Atmospheric Administration, said the findings "have potentially serious consequences for life in the oceans as well as for patterns of ocean circulation, storm tracks and storm intensity."

The researchers published their findings Monday in the journal Nature Climate Change.

This report contains material from Reuters and the Associated Press.

To learn what you can do that is effective to help fix global warming caused climate destabilization, click here.