THE OTHER SCIENTIFIC CONSENSUS THE EPA IS BUCKING... 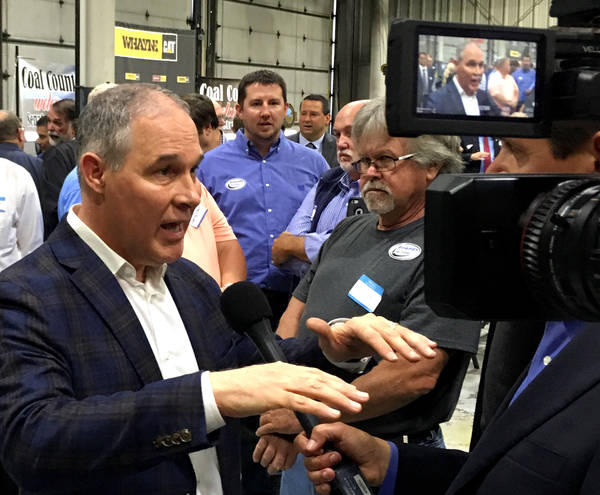 Scott Pruitt talking to a reporter after announcing in Hazard, Ky., on Monday that he Trump administration will abandon the Clean Power Plan. (AP Photo/Adam Beam)

The Trump administration skepticism of climate-change science is no secret, but...

There's another scientific consensus the Environmental Protection Agency just bucked on Tuesday when it announced it is unraveling the the Obama administration's effort to reduce carbon dioxide emissions from the nation's electricity sector known as the Clean Power Plan.

That would be the scientific agreement that there is no safe level of coal-fired power plant pollution that is healthy to breathe.

"There's a scientific consensus that we've been unable to find any threshold," said George D. Thurston, a professor of environmental medicine at New York University, adding that saying otherwise is "completely in conflict with scientific knowledge."

On Tuesday, EPA head Scott Pruitt submitted a proposal to repeal the CPP. By attempting to cut carbon emissions from the nation's power plants nearly a third by 2030 compared to 2005 levels, the CPP was a key component of the U.S. effort to meet the goals of the Paris climate agreement.

For those inside the Trump administration unconvinced by the large body of scientific evidence establishing that those carbon emissions contribute to the warming of the atmosphere, such a reduction felt like a wasteful, economically detrimental effort, especially to coal miners and coal companies that President Trump promised to save.

But Obama's EPA claimed the opposite: The CPP would be an economic boon.

Obama's argument: Obama's EPA justified the CPP by calculating, in dollar terms, the economic damage that manmade climate change has on the world's economy — a figure dubbed the "social cost of carbon." Pruitt now asserts that the previous administration greatly overestimated that cost. (The Post's Chris Mooney has a must-read piece for anyone who wants to understand the social cost of carbon, and the math the EPA used to come to its conclusions.)

These microscopic pieces — kicked up from soil by the wind, burst from volcanoes or forest fires or, since 20th century, spurted from smokestacks and tailpipes — are a main component of smog and are known to lead to lung, heart and other health problems. When coal is burned for generating electricity, fine particulates are emitted alongside carbon dioxide. Long-term exposure to some of the tiniest of these particles called PM2.5, so small they can enter the bloodstream, can kill.

More than a half century ago, long before the scientific underpinnings of human-caused global warming were established, Congress was certain enough of the negative health effects of particulate matter and other smog-forming pollutants that it passed the 1963 Clean Air Act. That and subsequent air-pollution legislation empowered the federal government, through the EPA when it was formed in 1970, to regulate such emissions.

So the EPA did — to great effect, significantly reducing smog in U.S. cities from the hazy days of the 1970's.

But population health experts say the public could benefit by reducing them even further. As the scientific evidence continues to mount about smog, researchers struggled to identify a "safe" level of PM2.5, according to Thurston.

"What they're considering doing is using some math manipulations to discount the value of health effects that happen from particulate matter, and the way they want to do this apparently to say that there's some magical level below which there are no effects of air pollution," Thurston said. "That assumption is analogous to and as specious as saying passengers in automobiles are at absolutely no risk of being hurt in a car accident if they're traveling below the legal speed limit."

Trump's argument: But instead of arguing that those gains in air quality simply aren't enough to justify the jobs and revenue lost from closing coal plants, Pruitt's EPA contends that below a certain threshold, those benefits don't exist at all.

In its new “Regulatory Impact Analysis" published alongside Pruitt's notice that EPA would undertake rulemaking to undo the CPP, the Trump administration "considers two scenarios in which the risk of death 'falls to zero' at certain low concentrations of fine particulates in the air," writes Mooney. "In one of them, the agency assumes there’s no more risk below the levels currently required by the National Ambient Air Quality Standards, which is 12 micrograms per cubic meter."

The facts: Air-quality experts say there is just no evidence to back up that claim.

“If you’re an area that is at 11, and the Clean Power Plan will push you to 9, under that assumption it says there are no health benefits,” said Jonathan Buonocore, an environmental health researcher at Harvard, told Mooney. “There’s no evidence this is true. Time and time again … we keep finding health benefits when air quality gets better, even in areas that are in attainment with the rules.”

As recently as June, for example,  a study in the New England Journal of Medicine found significant evidence of adverse effects related to PM2.5 exposure at concentrations below 12 micrograms.

"There are lots of studies, including my own, that show that lower pollution levels reduce adverse health effects," Thurston added, "even when it's below the standard."

The EPA has previously made that claim too, according to Jennifer A. Dlouhy at Bloomberg News. "The EPA has historically said there is no safe threshold for particulate matter, a conclusion that dovetails with a series of public health studies and underlies a host of other federal regulations governing power plant pollution."

Or as Emily Aktin at The New Republic wrote of EPA officials on Tuesday: "They’ll ignore both mainstream science on air pollution’s health impacts and the global economic costs of climate change."

The response: Replying to criticism of its plan, the EPA said via email that its "analyses are designed to increase transparency rather than imply a specific lower bound on the size of the health co-benefits."

“The facts are that the Obama administration’s estimates and analysis of costs and benefits was, in multiple areas, highly uncertain and/or controversial,” the EPA added.

Pruitt often states his desire to bring the EPA back to "agency's core mission," which he believes Obama neglected during his time in office. Part of that mission has been regulating the particulate matter pollution explicitly mentioned in the laws underpinning the agency.

The administrator has not said anything publicly to suggest he believes smog isn't bad for you. Indeed, Pruitt lamented in an interview with The Washington Examiner that Obama also left "air quality standards in 40 percent of the country in nonattainment" by not adequately enforcing smog-control standards.

NOTE: The wildfires in California are still raging, with at least 17 people dead, 185 missing and 25,000 fleeing their homes and at least 2,000 buildings destroyed. Full coverage in our Thermometer section below.