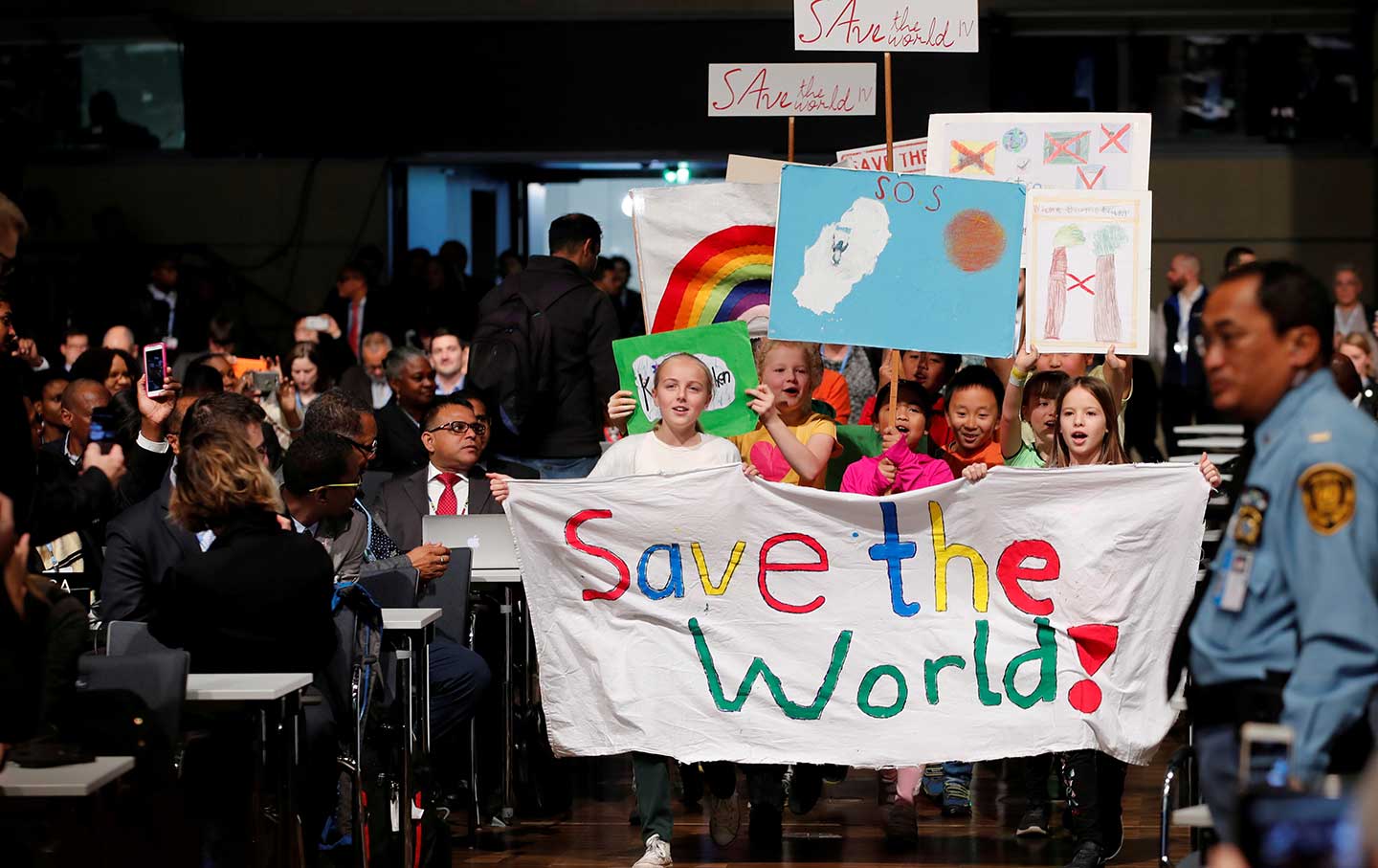 Children are seen during a climate march prior to the opening session of the COP23 UN Climate Change Conference 2017 in Bonn, Germany. (Reuters / Wolfgang Rattay)

If negotiators are going to meaningfully combat the climate crisis this week, they’ll need to forget about pleasing fossil-fuel corporations...

President Trump’s rejection of the Paris climate accord earlier this year sparked international condemnation. But in many ways the deal was sabotaged before it was even signed; Trump’s trouncing merely sealed the coffin. For all the polarization Trump has spurred, progressive environmentalists know that the deal was never intended to resolve the crisis but, rather, to contain the worst consequences of extreme weather and global warming.

A sober-eyed analysis of the Paris accord, published by Corporate Accountability International (CAI) ahead of the next round of climate talks that begins this week in Bonn, Germany, contends that Trump’s decision to withdraw from the Paris accord isn’t so much a battle between environmental progress and capitalist regression but, rather, a classic good cop/bad cop charade. Since corporations have shaped the agendas of both the Trump administration and the accord-negotiation process, environmental watchdogs argue that the treaty was actually rigged from the outset, and corporate profiteers have free rein to capitalize off watered-down regulations, with or without the United States. Whether the accord unravels or hobbles on post-Trump, the communities most impacted by climate change are bound to lose more lives, land, and jobs needlessly, as emissions and temperatures soar and mitigation measures are neglected.

“At it’s best, the Paris Agreement was simply the most the US would agree to,” says CAI spokesperson Jesse Bragg. Since that the agreement never had the full force of law, “What Trump is pulling the US out of is actually a great deal for US business—there are no binding limits, no regulations, and the agreement goes out of its way to invite corporations to take part.”

The main problem, according to CAI, is that the entire treaty framework is bound up in a free-market infrastructure that relies on the goodwill of energy monopolies. The “corporate capture” of the treaty-negotiation system, the report concludes, has ensured that the current emissions-reduction schedule will never be ambitious enough to yield the radical structural transformations needed to cope with the climate crisis. 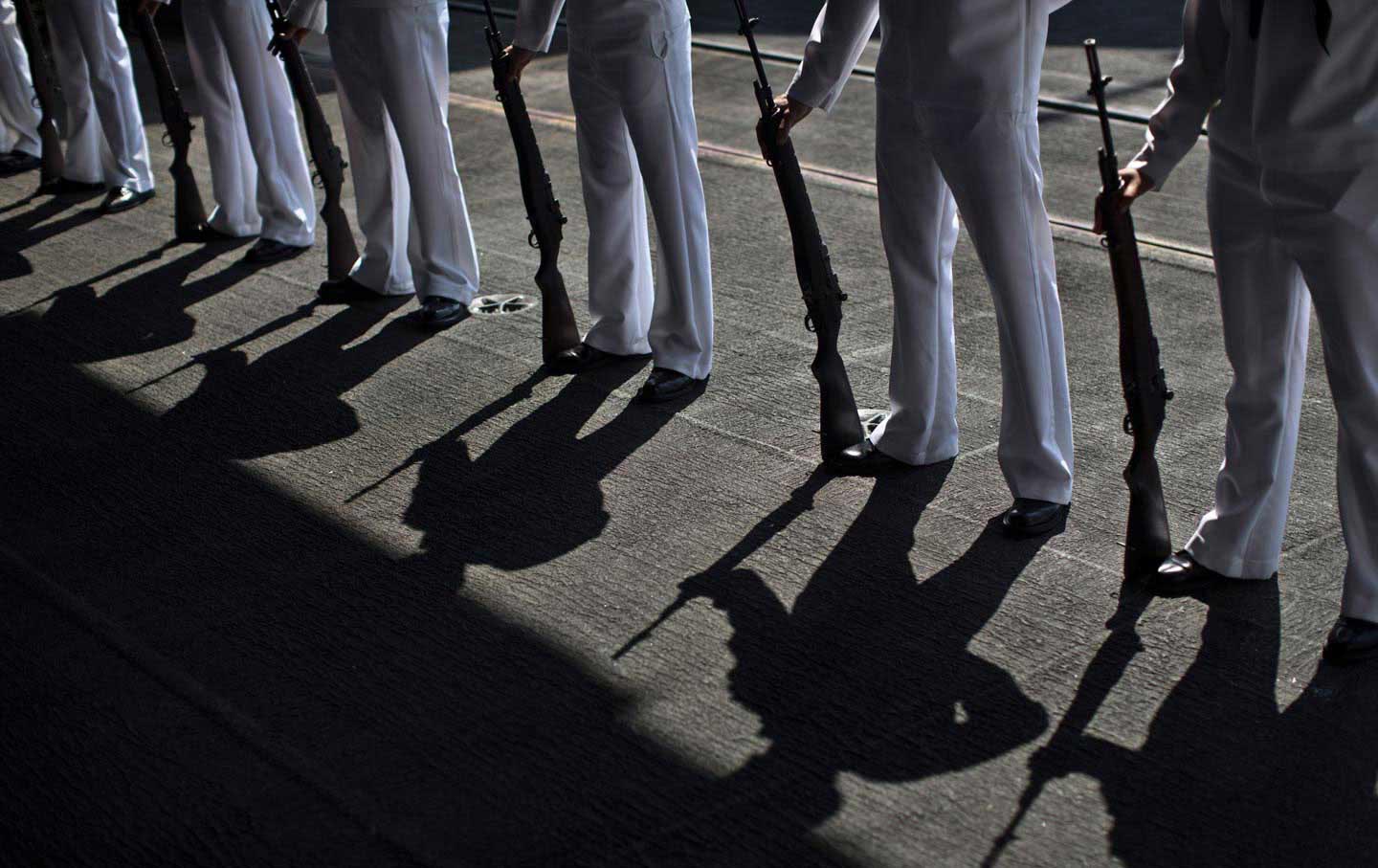 It’s true that Trump has proven to be the fossil-fuel industry’s staunchest ally in the climate-treaty process. In fact, the White House and EPA chief Scott Pruitt, a former corporate lawyer, are still pushing to weaken the deal further by pushing nuclear and coal power at the Bonn summit. Nonetheless, while trade groups like the World Coal Association and US Chamber of Commerce may seem aligned with Trump against Paris, behind the scenes the same influence peddlers have been buying the loyalties of climate negotiators since well before Trump’s election. Energy giants have used the talks as advertising platforms to promote industry-friendly “solutions,” like hyped-up, untested schemes for carbon-storage technology. Similarly, agribusiness lobbies have exploited the talks to push synthetic fertilizers and genetically modified products marketed as “climate-smart agriculture.”

As Teresa Anderson of ActionAid explains, “For years now industry representatives have been coming to climate negotiations…. they hold events, they join influential networks and…tell everyone that they stand for more ‘efficient’ food production,” only to push chemical-driven industrial agriculture instead of sustainable methods that prioritize biodiversity. “Meanwhile, the real solutions get ignored, total emissions from agriculture continue to balloon, and the industry sell themselves as climate leaders.”

Captured by corporate power, the current deal is not only plagued by inadequate decarbonization goals; it’s also devoid of any serious commitment to overhauling trade or energy policies. Even a modest fund for mitigation and adaptation for poor countries remains woefully underfunded, on a voluntary basis—and all in the face of new statistics showing record-high emissions levels.

To keep polluters from hijacking the process of cleaning up their own mess, CAI calls for a formal conflict-of-interest policy to prevent the corporate capture of international negotiations procedures. This would involve a legally binding ban on direct lobbying of environmental ministers by companies and business associations. Polluters would be prevented from courting ministers “to ensure that those allowed to participate in the UNFCCC negotiations share the objective of protecting people and the planet, not private interests or what’s good for business.”

As Corporate Europe Observatory argues, such actions are necessary to ensure the integrity of the negotiations and public transparency. Otherwise, by “sponsoring these talks, a Big Polluter can prop itself up as a legitimate actor, which in turn makes politicians more receptive to its deceptive lobbying.”

In addition to blocking lobbyists, the climate treaty must be reoriented toward a transformational agenda centered on public health, conservation, and radical changes in systems of industrial production. Investments must steer clear of “market-based solutions,” including the current favored approach of the “carbon trading” system that allows companies to basically buy “pollution credits” to meet global emissions targets. Such programs are easily corrupted and often apply dubious science to skirt regulations with a greenwashed veneer. Instead of focusing on “green growth” or other pro-business solutions, CAI argues, policy-makers must “Advance non-market approaches to international cooperation that hold the greatest potential to decrease emissions”

Capital needs to be redistributed toward the most impacted communities to restore the environmental losses caused by climate change as well as to democratize the energy and agricultural industries by empowering local communities to develop systems for sustainable farming, green-technology transfer, and renewable-fuel production.

If you like this article, please give today to help fund The Nation’s work.

The environmental and regulatory commitments demanded by civil society remain glaringly absent from the current Paris treaty. But the bottom line is that communities around the world shouldn’t see their struggle as one between Washington and Paris but between the public interest and neoliberal capital. Change isn’t coming from ministerial corridors in Europe, but from the frontline protests in the streets, from resistance camps at pipeline sites. International protocols are a useful way to bind governments to internationally coordinated targets, but those standards may turn out to be worthless if corporate lobbyists pressure negotiators to soften emissions standards.

“What’s at stake now is salvaging an inadequate deal,” Bragg says, “protecting it from further damage, and rapidly building off of it.” For a just and permanent transformation of our global production system, however, “it is as important—if not more important—to protect policy-making at home…. one of the most important aspects of this work is denormalizing the industry in policy making. A cultural shift is required.”

Paris was a rigged game that Trump managed to defy with a splashy display of political ego. But the public are bound to get cheated if we think that accord was the limit of what we can accomplish. Whether organizing locally or globally, communities must lead the transition to a more just economic structure, and leave no room for compromise with capital.

Michelle Chen is a contributing writer for The Nation.