THE PARIS CLIMATE DEAL WON’T SAVE US – OUR FUTURE DEPENDS ON DE-GROWTH... 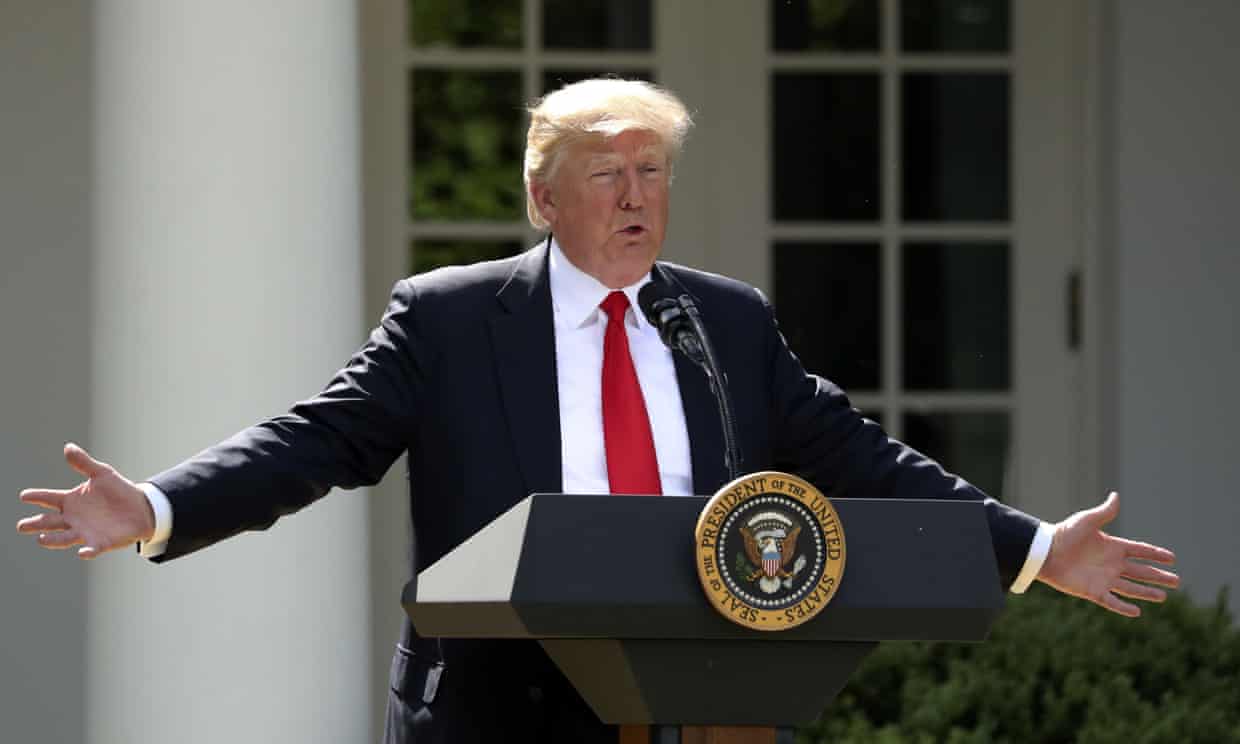 The success of the Paris climate deal depends on ‘negative emission’ technologies that have never been proven at scale...

When Donald Trump pulled the United States out of the Paris climate deal, the world reacted with outrage. And rightly so: the agreement represents a remarkable achievement in international diplomacy – a breakthrough after 20 years of failed climate negotiations. But as we rally to defend the Paris deal against the onslaught of an ill-informed bully, we need to resist the temptation to cast the agreement as some kind of saviour. It is not. Its purpose is right and noble, but its substance is nothing short of dangerous.

If you look closely at the Paris agreement, you’ll notice a curious contradiction. The text commits the world’s governments to limiting global warming to no more than 2C above preindustrial levels. But, strangely enough, the emissions reductions it lays out don’t actually get us there. Far from it. Even if all the world’s countries meet their targets (which is very unlikely, since the targets are non-binding) if we do nothing else we’ll still be hurtling toward more than 3C of global warming, and possibly as high as 4.4C. Way over the threshold.

What might our planet look like if it warms by 4C? No one can say for certain, but projections show that this level of warming is likely to bring about heatwaves not seen on Earth for 5m years. Southern Europe could dry up into a desert. Sea levels could rise by 1.2 meters before the century is out, drowning cities like Amsterdam and New York. Furthermore, 40% of species will be at risk of extinction. Most of our rainforests will wither away. Crop yields could collapse by 35%, destabilising the world’s food system and triggering widespread famine. In short, a 4C world looks very bleak indeed.

So why is nobody sounding the alarm about this? Why is nobody freaking out? The Paris agreement assures us that everything will be OK. But scientists are not so convinced.

Here’s the backstory. The Paris agreement relies on data from the Intergovernmental Panel on Climate Change (IPCC). Over the past couple of decades, the IPCC has been busy devising hundreds of different scenarios, or “pathways”, for how much we need to cut our emissions if we want a decent chance of averting catastrophic climate change. But as they were running the numbers, they stumbled upon a rather inconvenient fact. The necessary emissions reductions turn out to be so steep that getting there requires that we slow down and gradually reverse the pace of economic growth.

This conclusion did not go down well with politicians and industry bosses, and everyone knew it would be a tough sell in international negotiations. So the IPCC fudged it and began devising pathways that relied on the assumption that sometime in the near future – by around 2020 – we will have “negative emissions technologies” up and running, which will pull carbon out of the atmosphere.

Speculating on the hope of future technology, suddenly the IPCC was assuring us that we can get by with much more relaxed emissions reductions. We can keep our existing economic model intact, it said – and rich countries can maintain their high levels of consumption – so long as we can figure out a way to pull carbon out of the atmosphere.

There are lots of ideas out there for how to do this, like seeding the soil with pulverised rocks, or pouring iron into the ocean to stimulate plankton growth (now discredited). But the IPCC relies on one in particular, which it considers the most promising. It’s called Beccs, which stands for “bio-energy with carbon capture and storage”. Basically, the idea is to develop enormous tree plantations that will suck carbon out of the atmosphere. Then we harvest them, turn them into pellets and ship them around the world to power stations to be burned for energy, capturing the carbon emissions and storing the gases deep under the ground, where they won’t have any impact on the climate. Voila – an energy system that pulls CO2 out of the sky. What’s not to love?

Beccs features in more than 80% of the IPCC pathways, which means it sits at the very centre of the Paris agreement – even though it is not mentioned in the text. But there is a growing consensus among scientists that Beccs won’t work. The technology has never been proven at scale, and there’s no way it will appear in time to save us. Even if it did, it would require that we create plantations equivalent to three times the size of India, which would eat up one-third of the planet’s arable land, according to Kevin Anderson, deputy director of the Tyndall Centre for Climate Change Research. This would make it impossible for us to feed the world’s population. And transforming that much land into bio-energy monoculture would trigger ecosystem collapse that could be disastrous for all of us. 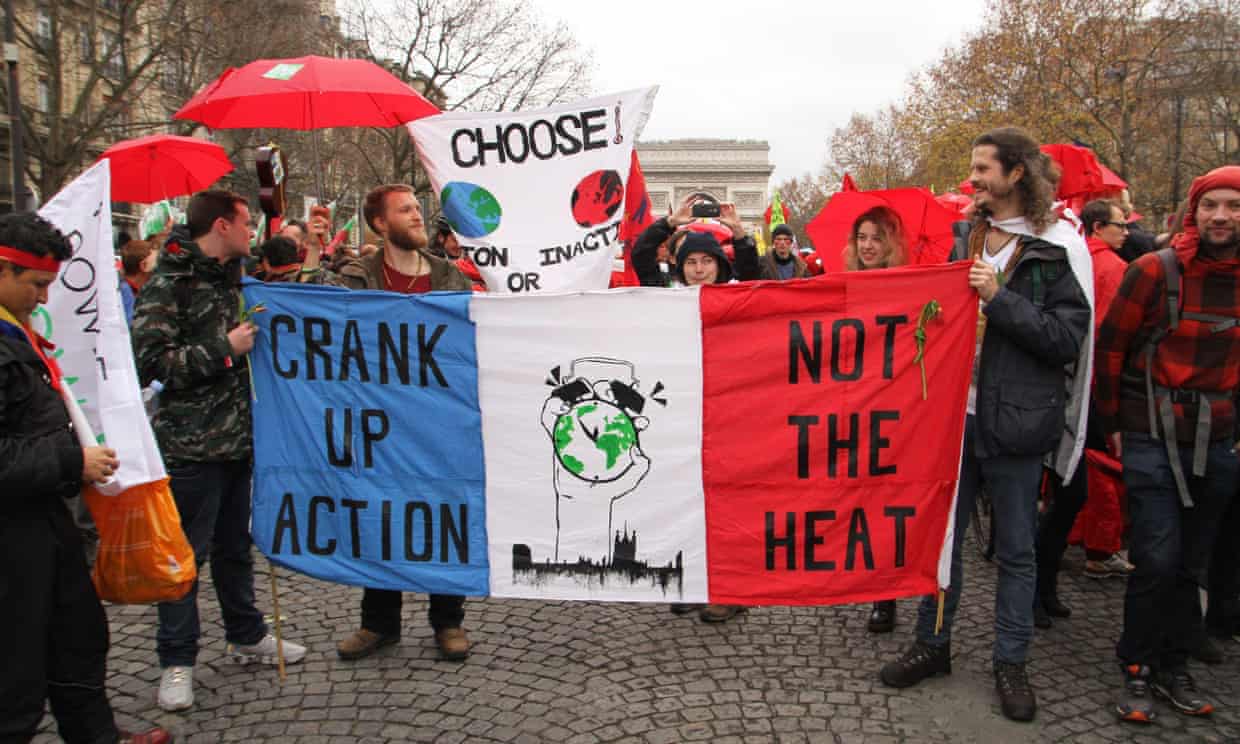 Protesters with a straightforward message during the Paris talks in 2015. Photograph: SEVGI/SIPA/REX Shutterstock

In other words, Beccs is simply not feasible. The Paris text could have been honest about its reliance on Beccs, giving us all a chance to scrutinise the plan and push for a better one. Instead we’ve been left hanging our collective future on a myth.

If we accept that Beccs won’t save us, we have to face up to some difficult truths. For one, we need to commit to much more aggressive emissions reductions. Anderson argues that to have a 50% chance of keeping below 2C, industrialised countries will have to cut emissions by 8-10% per year (beginning in 2015) until net zero in 2050. That might sound easy on paper, but it’s remarkably difficult. Even if we throw everything we have into efficiency improvements and renewable energy technologies, they will help us reduce emissions by at most 4% per year.

So how do we bridge the rest of the gap? Well, industrialised countries will have no choice but to downscale their economic activity by 4-6% per year. And poor countries are going to have to follow suit after 2025, downscaling by about 3% per year.

In other words, the climate science recognises a clear de-growth imperative. De-growth might sound scary, but it’s really not. All it means is easing the intensity of our economy, cutting the excesses of the very richest, sharing what we have instead of plundering the Earth for more, and liberating ourselves from the frenetic consumerism that we all know does nothing to improve our wellbeing or happiness.

Scholars are already busy sketching out how this might work, but one thing is for sure: it won’t look anything like global capitalism as it exists today. And that’s OK – evolution is good. After all, no one says “this is the best novel or sculpture or smartphone ever and will never be surpassed”. So why be timid about imagining our way beyond capitalism?

We face a stark choice: either we act now, right-sizing our economy and managing the transition in a careful and controlled way, or climate change will do it for us. If we wait for the latter option it will be unimaginably destructive and chaotic. According to Nicholas Stern of the London School of Economics, 4C of global warming will cost us at least 5% of global GDP per year indefinitely, and possibly as much as 20% – economic crisis on a scale never seen before.

This should shock us out of our climate complacency. The Paris agreement is a step in the right direction, but it needs to be much stronger. We need a deal that locks down ambitious emissions reductions – without fear of offending the powers that be – by pointing us in the direction of a new and better economy. Our future depends on it.