THE RELIGIOUS CASE FOR CARING ABOUT CLIMATE CHANGE... 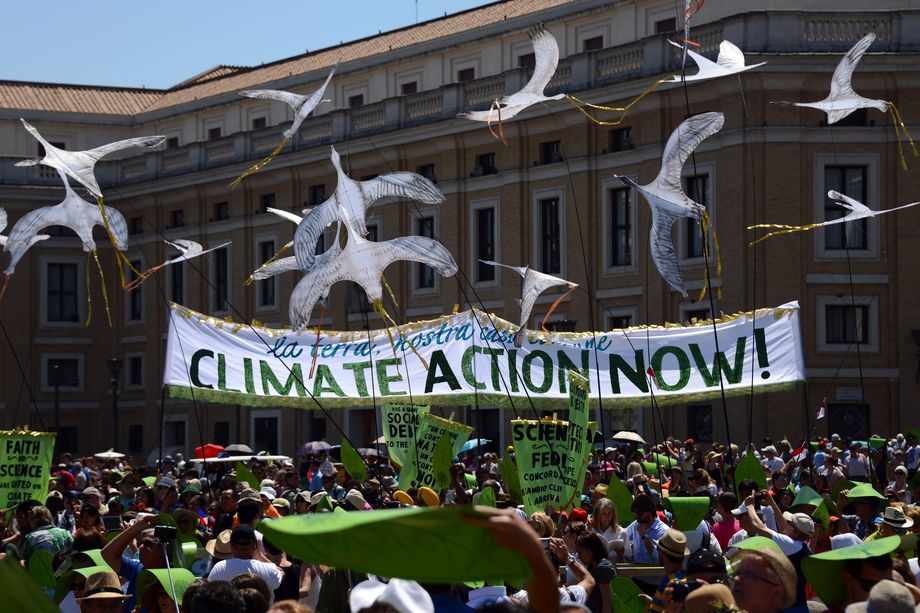 Talk about values, not just data: how this minister wants to inspire people to take action on protecting the environment...

What makes a person decide if they want to take action on climate change? According to a Pew survey, Americans say they are most influenced by education, the media, and personal experiences. One factor that barely plays a role: religious beliefs. Just 6 percent of American adults said their religious views were the most influential factor in deciding whether they think there should be stronger laws on the environment.

Reverend Brooks Berndt wants to change that — he wants to bring religion into the debate over climate change and the environment. As a pastor in Vancouver, Washington, he started a chapter of the Sierra Club's Beyond Coal campaign and worked to transition away from the state’s coal plant.

In his current position as the minister of environmental justice at the United Church of Christ in Cleveland, Ohio, he has led efforts to divest from fossil fuels, support renewable energy, raise awareness of the Flint water crisis, mobilize at Standing Rock, and work on other environmental issues that particularly affect communities of color and working-class families. Brooks and his church are official partners of the People’s Climate March on April 29 in DC.

“Grief over climate change is real,” he said. “Being in it for the long haul is knowing how to wrestle with things like grief. One of the best ways to deal with challenging issues … is to not be alone but to be in a community of support.”

I spoke with Berndt about why religious people should prioritize the climate and how faith can be way to influence people on this issue.

Religious people are less likely to believe in climate change and less likely to mobilize around environmental justice causes. Why do you think that is?

When you talk about the Christian faith in the US, you’re talking about a huge group of people with lots of diversity. A lot of Christians are not going to identify with that. At the same time, I think there is a sense that we need to own up with what’s going on in our own bigger house — that climate denialism is a problem. And there has been a history of Christians not coming down on the right side on the environment with harmful views.

At the same time, when you look at, okay, who’s moved the needle the most on climate opinion? The pope! He moved the needle in the right direction on climate issues. There’s persuadability and openness. Some good segments of people are persuadable if you present things in a moral framework and relates to their faith and values.

One of the sad realities is that climate became this ideologically polarized issue like marriage equality and other issues. As a denomination, we’re not strangers to that. We were the first denomination to come out for marriage equality. We’re used to entering into polarizing issues, trying to take a firm public stance and at the same time realizing in our denomination, there is tremendous diversity on any one issue. That’s also where we have the most to offer and is our greatest strength.

Why is it necessary to have a religious response to climate change?

As faith communities, we’re possessors of a rich language about what fundamentally motivates people to address environmental injustices and address the climate. When I look at what motivates activists, often what gets circulated in some venues is science reports.

But what actually motivates people is what I have found are the three great loves. Love of neighbor: You’re aware of the real and present suffering climate or pollution are causing right now, so you’re motivated once you have that awareness. Another is love of creation, concern for how our natural world is being decimated, extinction of animals, the acidification of the ocean and deforestation. The number one motive I’ve come across — although it’s not for everyone — is love of children.

How do you make a case for the environment scripturally?

Early on in the history of faith communities addressing environmental issues, a lot of emphasis was particularly on Genesis — that our role as humans is to be stewards of God’s creation. I wouldn’t detract from that, but I think we’re in a time where there are other scriptures and messages that are more relevant.

The whole Christian faith is basically about a vision of community that is in utter opposition to the Roman Empire. We come from a tradition that was very much against structures of power, structures of military might, and very critical of greed in relation to wealth. So I think we have to relate our environmental challenges to those scriptures.

It also relates to Pope Francis. One of his articulations is if you come from a faith where God sides with the poor and stands with the poor, then that’s a part of environmental issues today because it’s poor people being harmed.

Have you encountered any resistance from your community for the work that you do or the positions you take?

I’ve had members who would express to me strong opinions that were oppositional or might be categorized as climate denialism, but they also stayed in the community. With trying to transition away from [a coal plant in the state of Washington], I had members of my church who had at some point worked or had family members in that coal plant. I made plans to have a lunch with one of them and talked about it. It wasn’t that difficult once you sit down and have lunch with somebody.

Not too many people are for polluting the water or air but there’s a lot to be found in common ground and for people to be able to connect to an issue in a way that goes beyond the ideological or things one is fed in the media. When you can connect it to real life, people can get out of those ideological straightjackets.

A lot of climate activists are concerned about the new administration’s approach to the environment. Looking ahead, are you optimistic or worried about climate change?

If you’re a pastor, a lot of what you’re dealing with on a weekly basis is people caught in grief. Grief over climate change is real and has a significant impact on people. And being in it for the long haul is knowing how to wrestle with things like grief. One of the best ways to deal with challenging issues and things like grief is to not be alone but to be in a community of support and point people to resources around them.

I’m a big fan of the Exodus story. At times we find ourselves with our back against the wall or the sea, but at some point the waters do part and we’re able to walk through. Being able to have those stories and connect to what we’re going through right now is powerful. So whether it’s the Exodus story or the story of crucifixion and resurrection, these have helped us make our way through life, through the climate, and issue after issue over so many years.