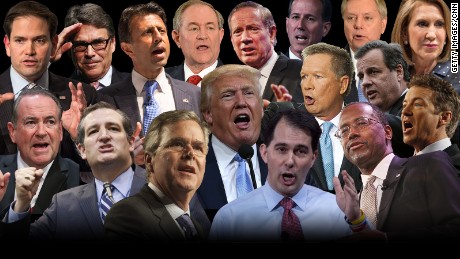 Amid internal calls for climate action, a study finds that Republicans are the only climate-denying conservative party in the world...

A paper published in the journal Politics and Policy by Sondre Båtstrand at the University of Bergen in Norway compared the climate positions of conservative political parties around the world. Båtstrand examined the platforms or manifestos of the conservative parties from the USA, UK, Norway, Sweden, Spain, Canada, New Zealand, Australia, and Germany. He found that the US Republican Party stands alone in its rejection of the need to tackle climate change and efforts to become the party of climate supervillains.

Republicans would be fringe in any other country

In any other democracy in the world, a Jeb Bush would be an isolated loon, operating outside the major parties, perhaps carrying on at conferences with fellow cranks, but having no prospects of seeing his vision carried out in government. But the United States is different. Here in America, ideas like Bush’s fit comfortably within one of the two major political parties. Indeed, the greatest barrier to Bush claiming his party’s nomination is the quite possibly justified sense that he is too sober and moderate to suit the GOP.

So, what’s different about the United States? One factor is the immensely profitable and politically influential fossil fuel industry. However, Canada and Australia serve as useful analogues. With Australian coal reserves and Canadian tar sands, fossil fuels account for a larger share of both countries’ economies. Nevertheless, Båtstrand noted,

The [Republican] party seems to treat climate change as a non-issue ... this appears to be consistent with the U.S. national context as a country with large reserves of coal.

Båtstrand also found that the emphasis on free market ideology is relatively strong in the Republican Party platform. However, the appropriate free market approach to climate change involves putting a price on the external costs of climate pollution. In fact, that’s why the President George H. W. Bush administration invented cap and trade as a free market alternative to government regulation of pollutants. So, free market ideology can’t explain the abnormal behavior of the Republican Party on climate change.

The answer may lie in a combination of fossil fuel industry influence, and increasing, record levels of political polarization. As shown by the Washington Post’s Christopher Ingraham, the conservative ideology score of House Republicans is the highest it’s been in over 50 years. 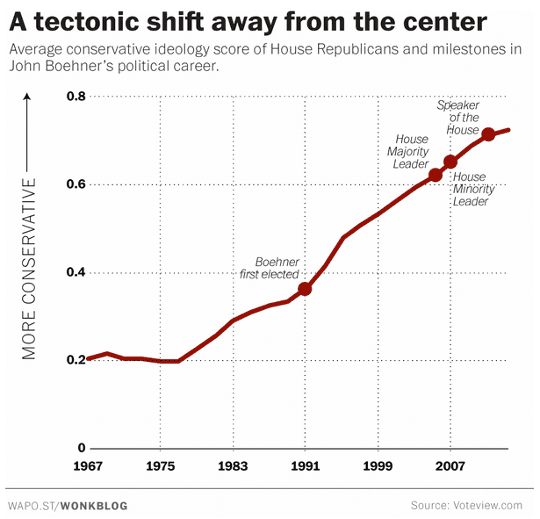 And as Nate Silver recently noted,

The Republican Party is no longer the party of Reagan, who listened to scientists and signed an international agreement to curb pollution that was causing the hole in the ozone layer.

Silver has also shown that when voting against Democrats, today’s Republican legislators are more united than at any time in the past century. And it’s clear from the language the Republican Party leaders use that they view climate change not as a scientific or critical risk management issue, but rather as a Democrat issue. Thus, Republican leaders simply can’t accept the need to address climate change, because that would put the on the same side of an issue as Democrats.

A split in the Republican Party

However, it’s also becoming clear that during this rightward shift, Republican Party leaders are growing increasingly out of step with their own voters. President George W. Bush’s Secretary of State Colin Powell recently criticized the party leaders, saying,

It should be obvious to party leaders that they cannot keep saying and doing the things that they were doing and hope to be successful in national-level election in the future, not just in 2016.

A recent survey found that conservative Republicans support accelerating the growth of clean energy, and 54% accept that humans are contributing to climate change and support putting a price on carbon pollution.

Results of an August 2015 poll question on American support of a carbon pollution tax, conducted by Echelon Insights, North Star Opinion Research, and Public Opinion Strategies, on behalf of ClearPath.

These poll results are consistent with previous surveys finding that while Republican voters generally don’t see climate change as a top priority, a majority of Republican voters support regulating carbon as a pollutant, and a plurality even support President Obama’s Clean Power Plan.

Eleven House Republicans have recognized this problem, and have submitted a Resolution calling for action on climate change. So there are encouraging signs that some Republican thought leaders and policymakers are recognizing that their party leaders’ ideologically-driven rejection of the need to mitigate climate change risks is unsustainable.

Every other conservative political party in the world recognizes it. Canada’s conservative party at least pays lip service to climate change despite an addiction to tar sands oil. Australia just replaced its climate-dubious prime minister Tony Abbott with climate realist Malcolm Turnbull, and even Abbott’s government had a climate ‘Direct Action Plan’, albeit an impotent plan.

With the entire rest of the world in agreement about the need to tackle the threats posed by human-caused climate change, and with a rift forming in the Republican Party over the extreme stance of its leaders on this and other issues, it’s only a matter of time before we see an inevitable shift back towards moderation, realism, and real conservatism in the Republican Party position on climate change...