THE REPUBLICANS WHO CARE ABOUT CLIMATE CHANGE: 'THEY ARE DONE WITH THE DENIAL'... 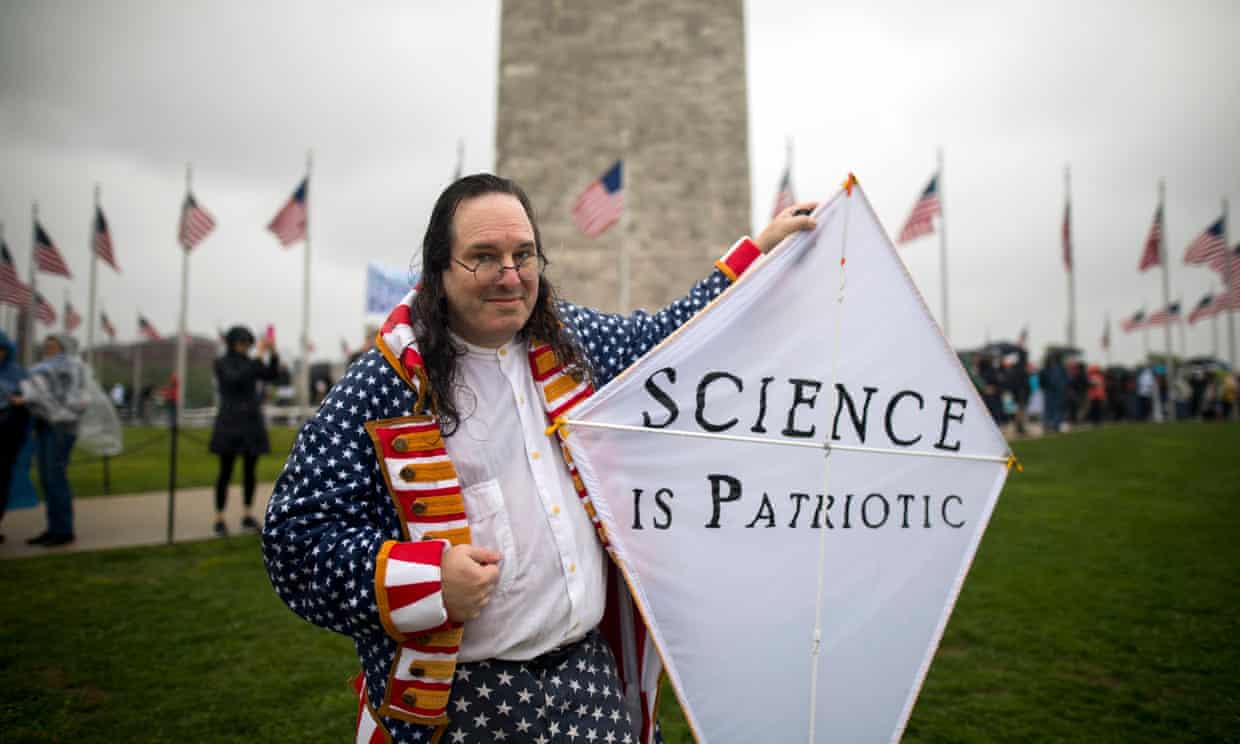 The March for Science in Washington DC. Members of the caucus say their goal is to depoliticize environmental policy in the US. Photograph: Jim Lo Scalzo/EPA

As despair intensifies over Trump’s agenda, the bipartisan Climate Solutions Caucus brings Democrats and Republicans together to break the deadlock...

he failure of American politics to deal with, or even coherently discuss, climate change was perhaps best illustrated when James Inhofe, a Republican from Oklahoma, took to the floor of the US Senate in February 2015 with a Ziploc bag and a mischievous grin. 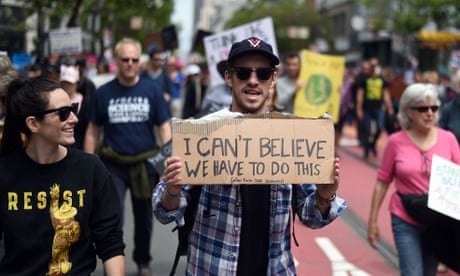 March against madness - denial has pushed scientists out into the streets

“We keep hearing 2014 has been the warmest year on record,” Inhofe said, pulling a snowball from the bag. “You know what this is? It’s a snowball, just from outside here. It’s very, very cold out, very unseasonal.” Inhofe, apparently content that 150 years of global warming research had been swatted away as nonsense, playfully tossed the snowball at the Senate president.

Two years later – both of which set new global records for heat – at least half a dozen former aides to Inhofe – the fiercest critic of mainstream climate science in Congress – have been hired to top positions at the White House and the Environmental Protection Agency. Scott Pruitt, the administrator of the EPA who has an erstwhile Inhofe aid as his chief of staff, recently erred by denying that carbon dioxide was a primary driver of global warming.

Donald Trump, meanwhile, has vacillated on the issue but has previously called climate science “bullshit” and a “hoax”. His actions since becoming president perhaps speak loudest: he has set about dismantling the Clean Power Plan, thrown open federal lands to coal mining, ordered the revision of clean air regulations and halted new vehicle emissions standards.

But amid climate activists’ despair, there are fresh shoots of hope that, as a party, Republicans’ climate intransigence is shifting. A growing group of Republicans in Congress are newly emboldened and are speaking out in favor of finally addressing a crisis that is starting to bite their constituents.

The Climate Solutions Caucus, set up just last year, now has 38 members, half of them Republicans. The congressional group, which is crafting bipartisan action on climate change, is bolstered by a new chorus of big business, faith groups and young college-based Republicans that are demanding the GOP drops the climate skepticism that has become a key part of its identity over the past decade.

If you want to join as a Democrat, you have to bring a Republican. It’s a Noah’s Ark approach, which is appropriate

“The vast majority of Republicans in private buy the science – the likes of Inhofe are in the minority,” said Danny Richter, legislative director of the Citizens’ Climate Lobby, a non-profit group that painstakingly helped put together the caucus.

“What Republicans needed was safe passage to talk about climate action in public, to not be the the first one to walk down that rickety bridge. There’s now a group who can see their constituents are genuinely concerned about climate change.

“They are done with the denial. That should really shift something fundamental in American politics.”

The standard bearer in Congress is Carlos Curbelo, whose district includes the Florida Keys, an area in serious peril from the advancing seas. Curbelo, the son of Cuban migrants, said his generally moderate views and age – he’s 37 – make him “both an old-school Republican and also a new young Republican.”

Curbelo was the first Republican to join the Climate Solutions Caucus and co-chairs it alongside Ted Deutch, a Florida Democrat. In a bid to get beyond partisanship, members of the group are evenly split. “If you want to join as a Democrat, you have to bring along a Republican,” said Deutch. “It’s a Noah’s Ark sort of approach, which is appropriate given the subject matter. We don’t argue about the science. It’s all very respectful.”

The wretched polarization of climate politics in the US showed signs of shifting last year when a group of 17 Republicans put their name to a resolution that called for “meaningful and responsible action” to the heatwaves, storms, floods and rising sea levels wrought by climate change. After surviving last year’s election despite committing what was thought to be a party heresy, this group is now attempting to break their colleagues’ collective fever over climate.

“There are a lot of Republicans who understand this is a real challenge, and the caucus is giving them a place where they can explore ideas,” Curbelo told Guardian US. “It was assumed that Republicans would take a position of denial, but that’s not the case. One of our main goals is to depoliticize environmental policy in the US.”

Curbelo admitted it is “labour intensive” to get some of his fellow Republicans on board, but the success of the small but expanding caucus is “spreading like wildfire. A lot of colleagues are now contacting us and wanting to learn more.”

Many Republicans were put off the climate issue by former vice-president turned activist Al Gore, according to Curbelo. The warming temperature of the planet has rarely ever been seen as an urgent issue by the party and the forceful campaigning by Gore and green groups was met with Republican hostility, almost as a reflex.

“Al Gore did all that without a Republican partner, so we got to a state of affairs where Republicans automatically oppose anything to do with the environment,” Curbelo said. “I don’t really blame Al Gore for that but there’s a lesson there. We need a proper, sober discussion on this issue.” 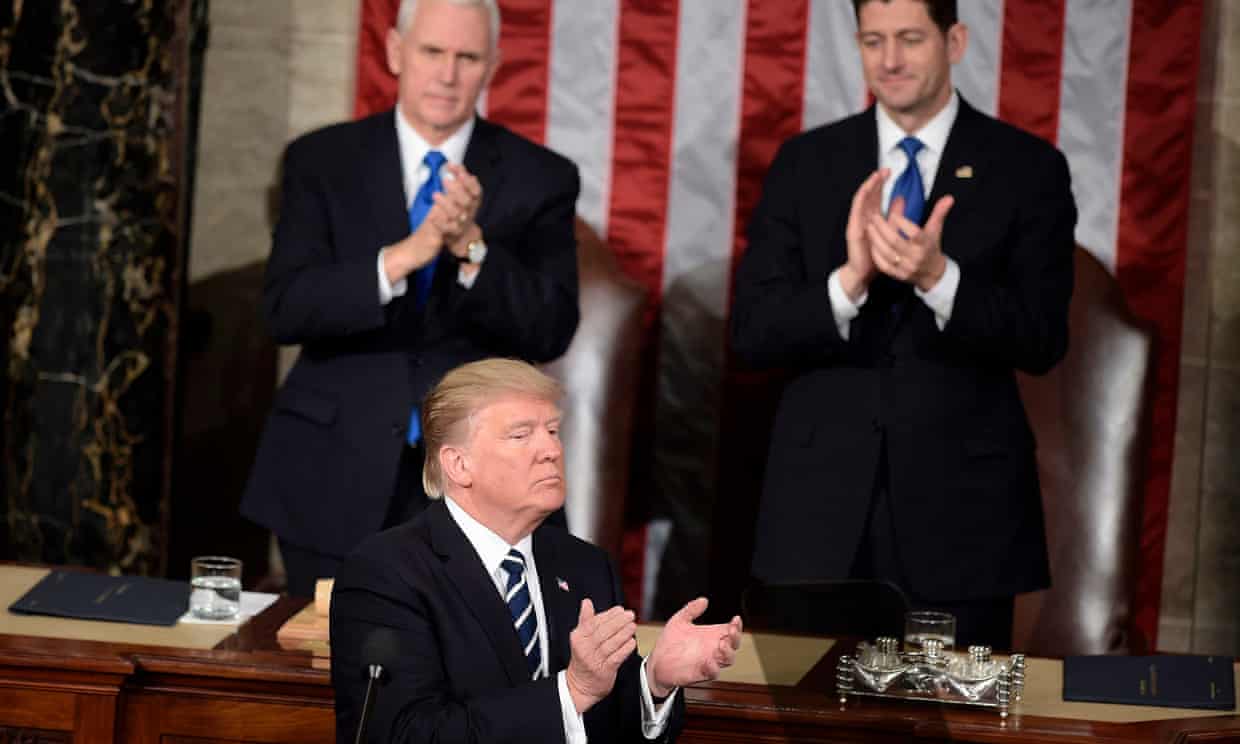 Despite Trump’s rhetoric, says Carlos Curbelo, ‘there are a lot of Republicans who understand this is a real challenge.’ Photograph: Brendan Smialowski/AFP/Getty Images

Trump’s aggressive rollback of Barack Obama’s climate agenda casts a long shadow, but nagging forces are buffeting Republicans’ position on climate change. Polling shows hearty public support for the science and the need to cut greenhouse gases, while the position of fossil fuel companies – often viewed as the dastardly puppet masters of denial – has evolved to the point where Shell and BP can write to the president to demand that he stay within the Paris climate agreement.

“There are Republicans who can now say ‘I am conservative and care about conservation’ and that is an important signal to the base, that they can go back to the tradition of Teddy Roosevelt and the party that passed the Clean Air Act,” said Richter.

“The problem we are now facing is that the Republican party hasn’t exercised its muscles on this issue in a long time. The more they do that, the easier it will be.”

Agreeing on the need for action is easier than settling upon what that action should be. Curbelo said that the caucus is an “ideas factory” but there are no consensus solutions to go with the group’s name. Republicans remain largely opposed to federal regulation in the shape of the Clean Power Plan, and while imposing a tax on carbon and letting the market sort it out has some heavyweight Republican support, it too is a very hard sell.

“I’m not for any sort of carbon fee. I like incentives more than being punished,” Scott Taylor, a Republican whose coastal Virginia district is slowly sinking into a rising Atlantic, told Guardian US. “I think it’s pompous to think man can stop an ice age. That’s ridiculous.

“That said, there are issues with sea level rise and how to defend against that. That is something Republicans are willing to debate now.”

Curbelo has called Pruitt “reckless” for his dismissal of climate science and the Climate Solutions Caucus has written to Trump to urge him to stick with the Paris deal. But with the administration dismantling measures to lower emissions, a replacement plan is needed soon if the US isn’t to abandon the challenge in a practical sense whether it stays in the agreement or not.

“The more real it gets the harder it gets,” said Richter. “But if we are able to get to the point where Republicans in Congress can pass something, it would be very difficult for Trump to veto that.

“There’s a strong economic and jobs narrative there. Republicans won’t want the Silicon Valley for solar, wind and battery storage to be outside the US.”

Richter said environmental groups also need to move beyond their entrenched position of attacking Republicans and instead applaud and encourage those willing to speak out on climate change. All of this will require both sides breaking free of a destructive cycle that has resulted in climate change becoming a partisan cudgel rather than an urgent cause for co-operation.

“The American people by and large want to see their leaders address the challenges of the 21st century and ignoring climate change is dangerous,” Curbelo said. “Are we going to be short sighted or are we going to be honest and build a sustainable country for future generations?”