THE RUSH TO EXPLOIT THE ARCTIC... 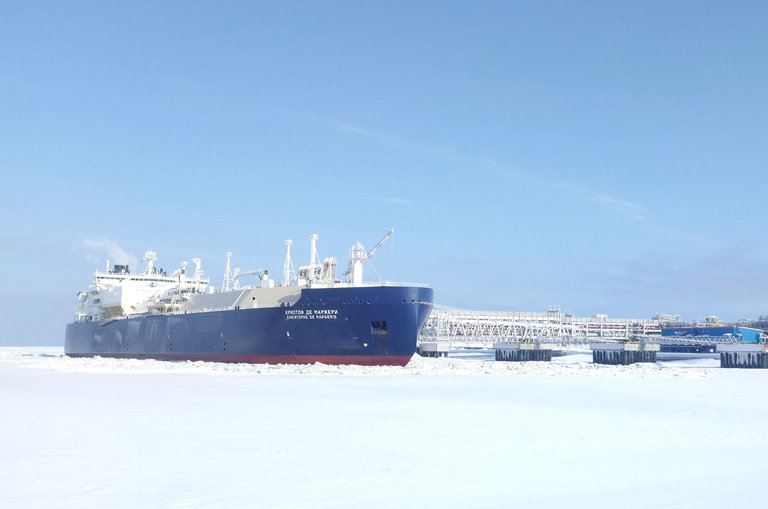 The Christophe de Margerie, pictured in an undated handout photo, is the first commercial vessel to travel the Arctic without the help of an icebreaker escort. Credit Olesya Astakhova/Reuters

The passage of a specially built Russian tanker carrying liquefied natural gas through the warming Arctic without an icebreaker escort marks a critical milestone in a centuries-old yearning for a shorter, faster route between the Atlantic and Pacific Oceans...

But it is not without irony that trade in a fossil fuel should be a major beneficiary of the climate change for which fossil fuels are largely responsible. And that, in a nutshell, defines the challenge posed by the rapid thinning of polar ice: how to ensure that the newly exposed potential of the Arctic is exploited peacefully and without further damage to the environment.

The rapidly thinning polar ice cap has opened huge opportunities for faster shipping, either along the Northern Sea Route over Russia or the Northwest Passage over Canada and Alaska, as well as access to vast troves of oil, gas and minerals that may be easier to reach as the ice grows thinner.

The voyage of the Christophe de Margerie was a major triumph for President Vladimir Putin of Russia, who has made opening the Arctic and exporting liquefied natural gas to Asia a priority. The tanker made the trip from Norway to South Korea in 30 percent less time than the conventional route through the Suez Canal would have taken.

Shortening the passage from the Atlantic to the Pacific means that less fuel will be burned by the ships delivering natural gas, which itself is cleaner than most other fossil fuels. But more shipping also generates new threats to the delicate Arctic environment, while the competition for resources generates new tensions among nations seeking to exploit the region. Even Canada and the United States have sparred over the Arctic. Russia, with the longest Arctic coast, ostentatiously staked a claim to vast stretches of the Arctic seabed by planting a flag beneath the North Pole in 2007.

However strenuous the efforts to limit greenhouse emissions, the melting of polar ice is expected to continue into the indefinite future. With the likelihood of further economic and territorial competition in mind, an Arctic Council was formed in 1996 with eight Arctic nations — the United States, Canada, Denmark, Finland, Iceland, Norway, Russia and Sweden — to promote cooperation and coordination in the region. But the council has no enforcement powers, and its mandate explicitly excludes military matters.

President Barack Obama made extensive use of the council and made climate change a priority issue when the United States took the lead of the Arctic Council for two years starting in 2015. President Trump’s secretary of state, Rex Tillerson, attended the council’s most recent sessions, but the passion Mr. Obama brought to the climate issue has completely disappeared; Mr. Trump has dismissed global warming as a “hoax,” has proposed opening the American Arctic to oil and gas drilling and has pulled the United States out of the Paris agreement on climate change.

It’s probably too much to hope that the success of the Russian tanker will change Mr. Trump’s attitude on climate. But it should open his eyes to the need to make sure that the struggle for territorial and commercial advantage does not get out of hand.