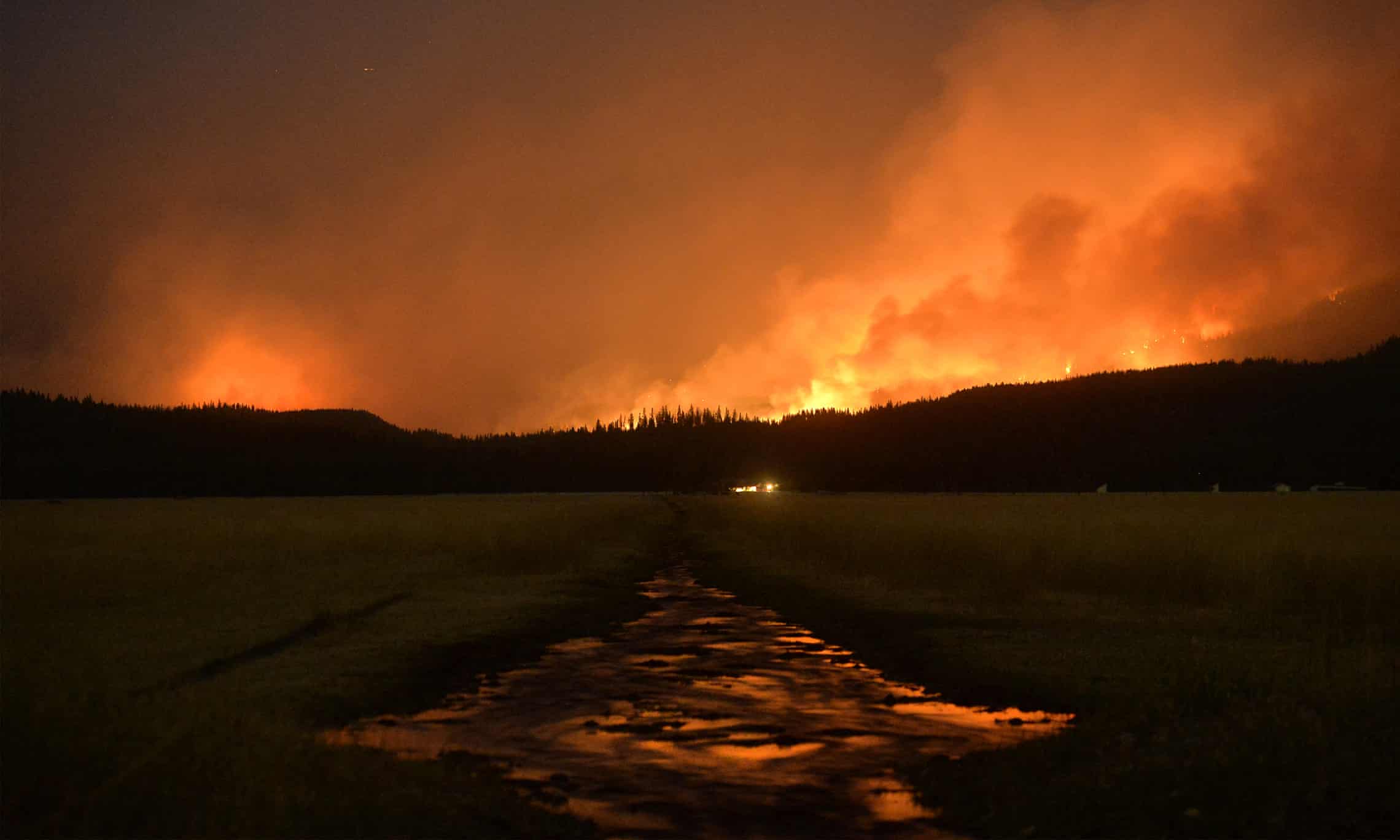 A wildfire burns in the Lolo national forest in Montana in August. The severe drought has served as ideal conditions for continued fires. Photograph: Rion Sanders/AP

It came without warning, and without equivalent. Now a flash drought is fueling fires and hurting the lives of those who work the land...

When Rick Kirn planted his 1,000 acres of spring wheat in May, there were no signs of a weather calamity on the horizon. Three months later, when he should have been harvesting and getting ready to sell his wheat, Kirn was staring out across vast cracked, gray, empty fields dotted with weeds and little patches of stunted wheat.

“It’s a total loss for me,” said Kirn, who operates a small family wheat farm on the Fort Peck Reservation, an area of north-eastern Montana that lies right in the heart of the extreme climatic episode. “There’s nothing to harvest.”

Kirn’s story is typical across the high plains in Montana and the Dakotas this summer, where one of the country’s most important wheat growing regions is in the grips of a crippling drought that came on with hardly any warning and, experts say, is without precedent.

While much of the country’s attention in recent weeks has been on the hurricanes striking southern Texas and the Caribbean, a so-called “flash drought”, an unpredictable, sudden event brought on by sustained high temperatures and little rain, has seized a swathe of the country and left farmers with little remedy. Across Montana’s northern border and east into North Dakota, farms are turning out less wheat than last year, much of it poorer quality than normal.

This is as dry as it’s been in history. A lot of people try to compare this to previous years, but you just can’t

Most farmers in and around the Fort Peck Reservation agree that climate change is to blame for the sudden drought and ruined crops, but that doesn’t change the fact that farmers and others who make their living off of agriculture are now subject to shifting political winds and strained debate around the issue.

“This is unprecedented,” says Tanja Fransen of the National Weather Service in Glasgow, a larger city just up the road from Fort Peck. “This is as dry as it’s been in recorded history and some of our recording stations have 100 years of data. A lot of people try to compare this to previous years, but really, you just can’t.”

Adnan Akyuz, the state climatologist for North Dakota describes the unusual draught in terms that are reminiscent of descriptions of deluge brought on by Hurricane Harvey. “It is safe to say, we got into it very fast, which caught us off guard and we didn’t know it was going to continue,” he says.

Akyuz said that March through July was the third-driest five-months on record in North Dakota since 1895, a dire situation impossible to predict given traditional methods of weighing snowpack with average seasonal temperatures to monitor for potential drought. But in the future, unpredictable may be the best prediction. 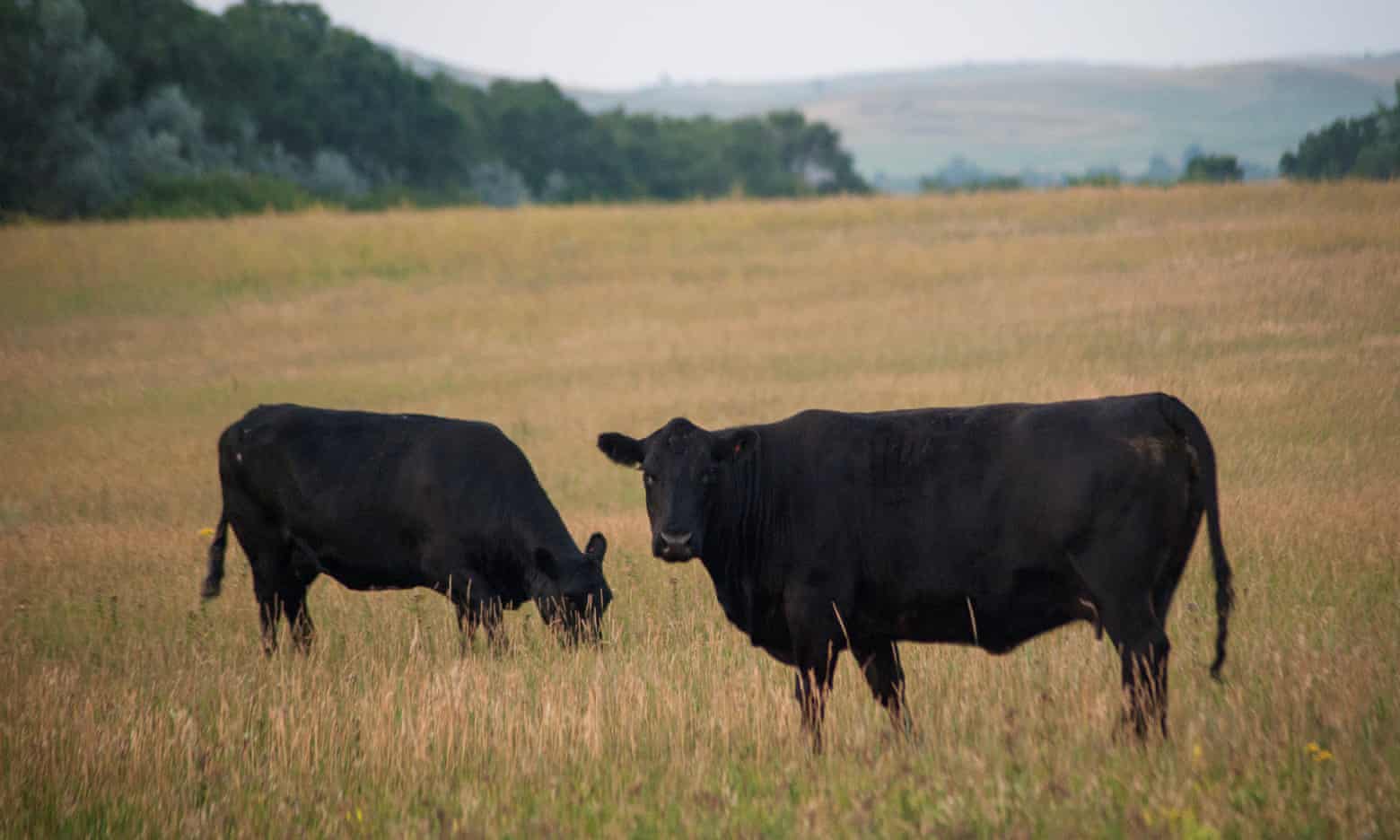 Cows graze in a field in Killdeer, North Dakota. The drought has been difficult for ranchers. Photograph: Andrew Cullen/Reuters

As of late August, the US Drought Monitor classified all of Montana in some stage of drought, with 65% of the state’s vast lands in “extreme” or “exceptional” drought.

“The new normal is that now we have a warmer world, in times when you’re not getting your normal load of rain, things can go bad very quickly,” said Brenda Ekwurzel, senior climate scientist with the Union of Concerned Scientists.

Partly as a result of the drought, Montana is also dealing with one of its worst wildfire seasons on record. As of early September, wildfires have burned more than 1m acres – among the state’s top five most devastating fire seasons in terms of acres burned – and forecasts suggest the destruction will continue for weeks.

In southeastern Montana, cattle rancher Lillian Ostendorf explains taking turns on fire lookout duty, which entails sitting on top of a hill scanning the horizon, watching for smoke to flare up on the wide-open prairie. Fires come up quickly and move fast. Just last week, a fire that sparked on her family’s ranch spread several miles before it was put out. The situation requires constant, exhausting vigilance. 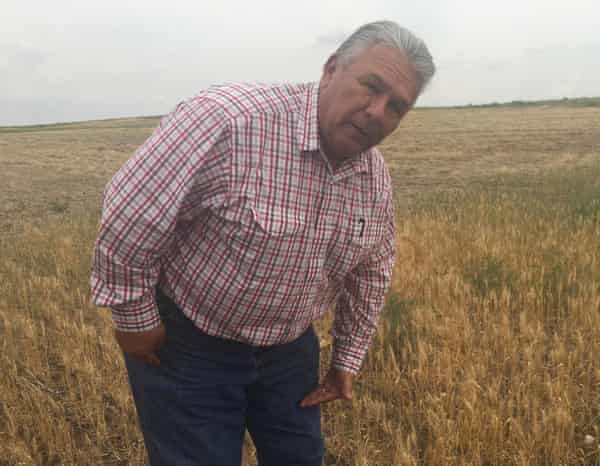 Rick Kirn, a Montana wheat farmer. ‘There’s nothing to harvest.’ Photograph: Kathleen McLaughlin for the Guardian

“There’s lots of different stories about things starting fires right now. Everything from a horseshoe hitting a rock to lightning to vehicles going down the highway,” she says.

John Youngberg, director of the Montana Farm Bureau Federation, says the extreme summer is forcing farmers and ranchers to make tough decisions every day about what they can salvage. Thus far, there’s no comprehensive estimate on agricultural losses this year in the region but the drought is taking a certain toll.

Further to the northwest, in Jordan, near the heart of a now-contained Lodgepole Complex fire that burned 270,000 acres this summer, farmers and ranchers say the actual toll of the fire on livestock and future crops could take years to see.

“We won’t know for months how the cattle were affected. We don’t know if they’ve burned their feet, or if they inhaled smoke and it affected their lungs. We have no idea,” says Teddy Roberston, a Garfield County commissioner who for 30 years made her living as a cattle rancher.

“We’re tough and we have a lot of fight left in us, but it’s just going to take some time because we’ve never experienced such a catastrophic loss,” she added. 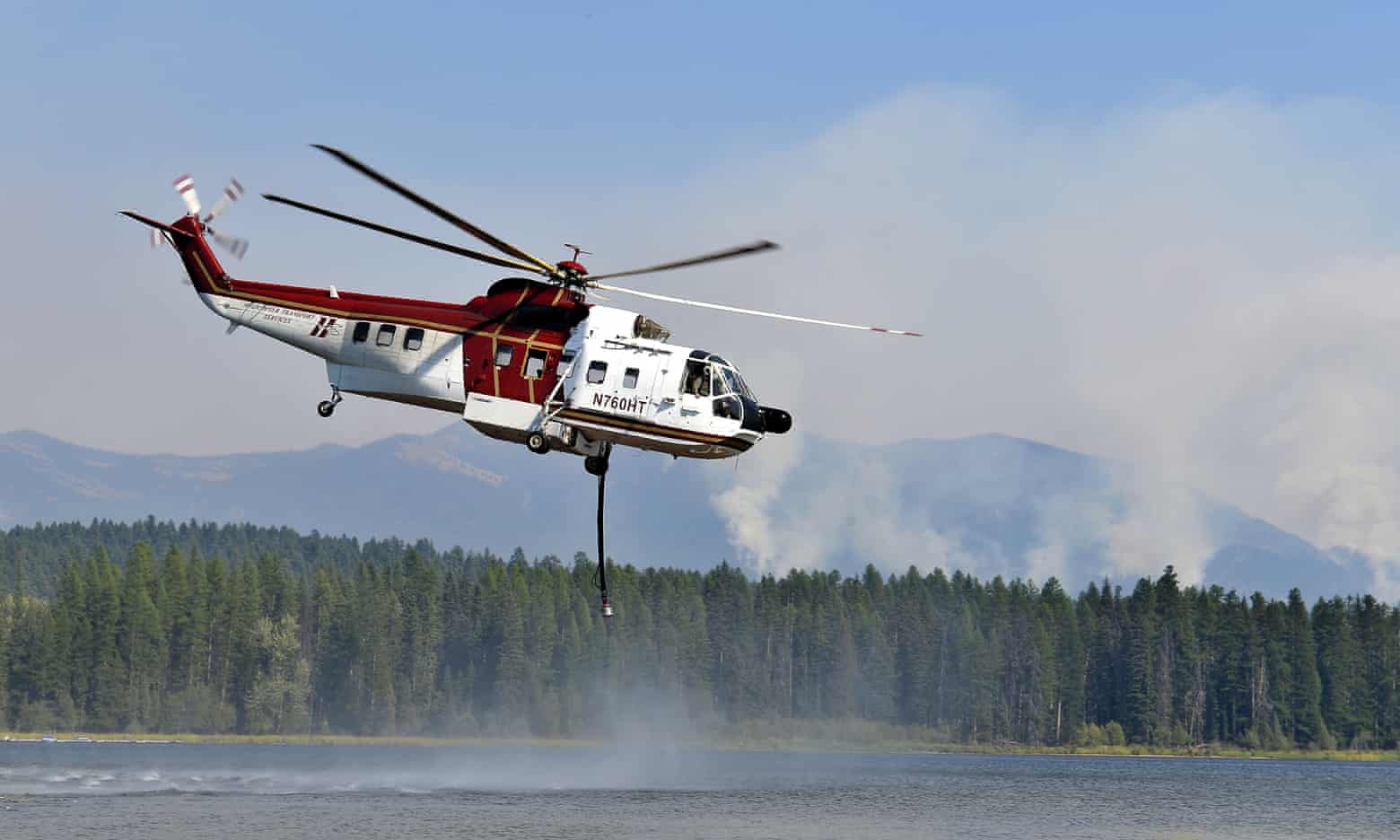 A helicopter fills its water tank as it readies to battle a wildfire. Across Montana, wind is fanning numerous fires in the drought-addled state. Photograph: Rion Sanders/AP

Outside of agriculture, wildfires have burned with devastating impacts.

In late August, one of only two still-standing historic backpacker chalets in Glacier National Park was lost to a fire and the park has moved art and valuables from another historic lodge at Lake McDonald as fire approaches. Much of the state is blanketed by thick smoke, in some cases with air quality levels soaring to equal bad days in Beijing.

Montana’s Democratic governor Steve Bullock has declared the entire state a fire disaster and warned that the battle will continue. “The reality is Montana is in a severe drought and the conditions are ripe for continued severe fires throughout September,” Bullock wrote in a Facebook post on Monday.

Destructive force of Irma and Harvey has Trump expressing awe, but those in power should focus on the environmental causes. Read more...

Republican members of the state’s congressional delegation have instead blamed environmentalists for the summer of fire ruin. In an interview two weeks ago with Montana Public Radio, senator Steve Daines argued that lawsuits from environmental groups that prevent timber sales and logging are at fault for the massive fires.

On the ground, in places like Fort Peck, farmers are sharing the pain and resources. In North Dakota and eastern Montana, local hay-distribution programs are helping to ease the burden for those whose crops didn’t materialize. Akyuz says that while the political debate might continue, farmers and others directly affected by the disaster are figuring out how to make it through.

Kirn, only one of the thousands of farmers and ranchers hit by the disaster, thinks this might be the end of his farming days. Irrigation is too expensive for small farming operations, leaving crops at the mercy of climate. “This is absolutely the worst year I’ve ever seen,” he says, gesturing across the barren fields.

Why COVID-19 previews a coming larger crash. What we must do to save ourselves. What is the right new normal?...