THE US TRIED TO DERAIL CLIMATE ACTION BEFORE – AND IT ENDED IN HUMILIATING DEFEAT... 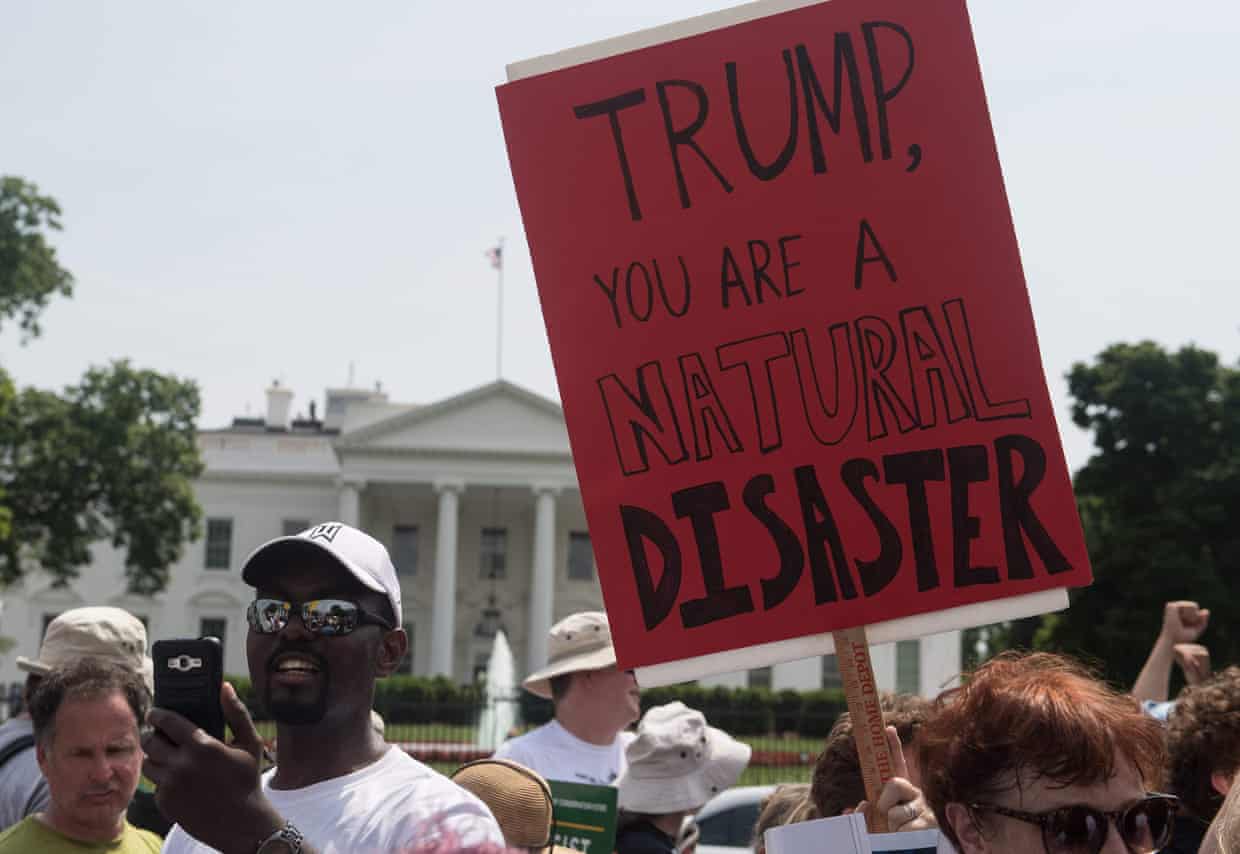 Protesters in front of the White House during the People’s Climate March in Washington, DC. Photograph: Nicholas Kamm/AFP/Getty Images

George W Bush failed in his attempt to block global action on climate change. His mistake – about to be repeated by Trump – was to imagine the UN process was weak...

A smell of burning coal fills the chilly air as delegates pile into the conference chamber. Outside, protestors shiver in polar bear suits under threatening skies and forbidding grey concrete; inside, smiles, colourfulcostumes and a warm glow. Negotiators, politicians, activists who have spent their lives fighting climate change are jubilant. The US has stalled global action on climate change for two full presidential terms, but no longer. In the chamber, at last, the White House meltdown is in full flow.

US president ditches current agreement: ‘We’re getting out, but we’ll start to negotiate and we’ll see if we can make a deal that’s fair’. Read more...

As Trump threatens to repeat the George W playbook, pulling out of the Paris climate agreement, reversing anti-carbon measures at home and trashing climate science, it is worth remembering how the last one ended: in humiliating defeat. Only this time, the world has changed. Trump’s own advisors, along with big US oil businesses, the US public, and the world’s next biggest economy, China, are lined up against him. This time a defeat is even more likely, and even more damaging to the US’s interests and economy.

When the Kyoto protocol came into force in 2005, rejuvenating the lacklustre UN negotiations on global climate protection, Cheney stood firm against joining the rest of the world. So the US, alone apart from Australia and a handful of tiny players, refused to take part in the post-Kyoto talks. At the annual UN conferences, the US forced a “twin-track” process, taking part in only the meetings it agreed with.

Bush also took pains to undermine the UN from the outside. He set up US-led alternative meetings for the governments of big economies, including the Major Economies Forum, and withheld approval to address global warming in existing international groupings, such as the G8 and the G20.

The expectation was that, with the US doing its best to undermine it, the UN climate process – and with it any prospect of a legally binding obligation on developed countries to cut their emissions - would flop. This was a terrible miscalculation.

Every tactic tried by Bush failed. The Major Economies Forum turned into an instrument for forcing US action; the G8 leaders, led by Angela Merkel, rounded on Bush and forced him to sign up to their climate pledge; the UN carried on negotiations while ignoring Washington.

The ultimate humiliation came at the UN conference in Bali at the end of 2007. Having held out for two weeks against allowing work to begin on a post-Kyoto agreement, the US negotiators were left isolated as fraught and sleepless talks headed into an extra day. Finally, in the sweaty tropical heat of the conference floor, the representative from Papua New Guinea shouted an impassioned ultimatum, to roars and cheers from the assembled nations: “If you’re not willing to lead, get out of the way!” Deserted by every ally, Bush’s chief diplomat could stand it no longer. The US conceded; the gavel came down; the process that would eventually lead to the Paris agreement was at last begun. Bush’s humiliation at the hands of one of the world’s smallest nations was total.

Since then, the forces arrayed against US intransigence have multiplied. China for many years held out against any suggestion it should take on national targets to curb its greenhouse gas emissions. But at Paris, the Beijing government marked a major change, signing up to play its role in the global targets. This commitment came only after China had begun to realign its economy to a cleaner, greener footing. Having staked its prestige, Beijing will not turn back.

For the Chinese, and other big developing nations from India to Brazil, Mexico to South Korea, the Trump administration’s attitude offers an irresistible opportunity. They can now claim the moral high ground, having signed up in good faith to make Paris a success, reducing their own emissions and investing in modern technology. They, not the US, have influence to gain here, by offering help to poorer developing nations, the worst affected by climate change. China and other big countries are no longer as dependent on the US economy as they once were – the financial crisis saw to that.

Bush’s core mistake – about to be repeated by Trump – was to imagine the UN process was weak. The apparently ramshackle nature of the negotiations, in which every country, however tiny, has an equal say with the biggest economies, turned out to be its greatest strength. Doomsayers have confidently predicted the imminent demise of the 20-plus-year talks from the outset, yet somehow the process – never perfect, never adequate to the challenge – still emerges as a hopeful example of what global collective action can achieve. Never more so than at Paris in 2015, when cheers and whoops greeted the signing of the first global legally binding commitment to prevent warming breaching the 2C limit.

Though Trump will not succeed in killing Paris, no one should under-estimate the damage he can do. US emissions are the world’s second highest, and under Trump they could rise again to add to the risk that warming will breach 2C. Already, the world’s poorest are suffering drought, floods, famine, and the inundation of low-lying coastal areas. Europe’s southern regions face increasing drought while floods hit the north. In the US, water shortages afflict crop-growing areas and wildfires threaten cities. The rest of the world will have to work harder to make up for US’s refusal to face reality.

Inside that last chilly UN meeting of the Bush administration, in 2008, with Obama already voted in as president-elect, the representatives of the lame-duck White House were asked in the closing press conference if they had any regrets. Harlan Watson, Bush’s envoy, took the microphone. “Yes,” he said. “I wish I was a little bit taller, and a lot more handsome.”

Eight years of trying to block global action on the biggest environmental threat to the planet, reduced to a feeble joke. This time, the stakes are too high for White House mockery. The world can stop Trump from making a farce out of a tragedy.