THE WATERS OF THIS HUGE AFRICAN LAKE AREN’T MIXING — AND THE CONSEQUENCES COULD BE DEVASTATING... New research has revealed some alarming insights about the effects of climate change on one of the world’s oldest and largest lakes...

study published Monday in the journal “Proceedings of the National Academy of Sciences,” suggests rising temperatures have been responsible for significant declines in the fish that populate Africa’s Lake Tanganyika and feed the surrounding communities — and that these declines may only worsen as global warming continues to progress.

The research suggests that sustained warming throughout the decades has hindered a vital “mixing” process, common to lakes all over the world, that helps to spread nutrients and oxygen throughout the water. Typically, this process occurs when oxygen-rich water near the surface of a lake sinks down to deeper areas (a churn often aided by the wind), and nutrient-rich water rises up from the bottom to take its place.

The problem is that when the air temperature rises, it can cause water near the surface to heat up — and because warm water is less dense than cooler water, the differences in temperature between the surface and the bottom of the lake make it much more difficult for two to mix together. When this happens, some parts of the lake don’t receive enough oxygen while other parts don’t receive enough nutrients, and marine organisms in both areas suffer as a result.

This is the effect the research team believes has been occurring in Lake Tanganyika — which is a serious problem, given how important the lake is to nearby human communities.

Lake Tanganyika is one of Africa’s Great Lakes and the second largest freshwater lake in the world by volume. It’s also one of the oldest lakes in the world at about 10 million years in age, and it’s known for having some of the highest levels of endemic species, or organisms found nowhere else in the world. 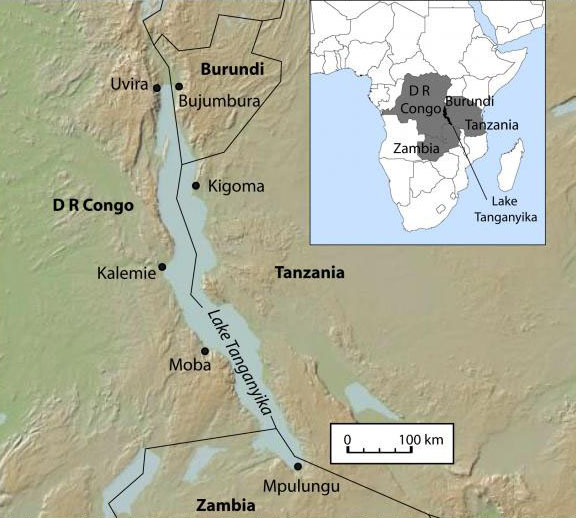 Bordered by Tanzania, Burundi, Zambia and the Democratic Republic of the Congo, it’s a vital source of food in the region. The lake has been known to produce more than 200,000 tons of fish in a year, and it’s estimated that its yields may account for up to 60 percent of the animal protein consumed by humans in the region.

In recent decades, though, it’s become apparent that fish populations in the lake are not what they used to be. The question that’s been occupying scientists’ minds is what’s behind the declines. While experts have hypothesized that climate change has played a role, many researchers have also pointed to the pressure of commercial fishing — which took off in Lake Tanganyika in the mid-20th century — as a major culprit.

“There has been an ongoing debate between various scientific communities as to the relative importance of climate change and fishing pressure,” said Andrew Cohen, the new study’s lead author and a distinguished professor and expert in paleolimnology — the study of lake history using ancient sediments — at the University of Arizona.

The new study suggests that declines in the lake’s fish predate the onset of commercial fishing there, he said, meaning climate change was having a negative impact before overfishing ever became a concern.

The researchers demonstrated this effect by drawing sediment cores from various sites in the lake and analyzing them in the lab. Certain chemical components of ancient sediments can reveal a lot about a region’s climate history — it’s a method that’s commonly used by climate scientists to determine how an area has changed over thousands of years.

The researchers were also able to use certain aspects of the sediment samples to determine how algae production — the foundation of the lake’s food chain — has changed over time. And they also examined the lake’s fossil record to see how fish and mollusk populations have grown or declined throughout the ages.

After constructing a history going back about 1,500 years, the researchers found that as the lake temperatures have risen, the fish and mollusk fossils have declined, suggesting warmer temperatures have been bad for the lake’s biodiversity. The results indicate this pattern has been particularly striking since the late 19th century, when the lake began to experience sustained warming.

In fact, the study suggests that the area of suitable habitat on the lake floor has shrunk by about 38 percent since the mid-20th century.

A reduction in the mixing of the water can be identified as “the fundamental problem that this lake is facing,” Cohen said. “And the decline in fishery is in large part a consequence of this climate change phenomenon.”

This is not to say that commercial fishing has played no role in recent declines, Cohen added. Since the middle of the 20th century, the two factors have likely been working together in concert. Rather, the new study confirms that climate change also is a major culprit — and has been for a much longer period of time.

Furthermore, the results serve as a kind of warning bell for the future, given that temperatures in the region will likely continue to warm in the coming decades. Future management of the lakes fisheries will need to account for the fact that fishing is not the only force placing pressure on fish populations, and that current levels of commercial fishing may already be unsustainable there.

Cohen cautioned that the effects observed in Lake Tanganyika don’t necessarily apply to lakes all over the world. In the Arctic, for instance, there’s some evidence to suggest that rising temperatures may actually increase productivity in some lakes.

And even in other tropical lakes, there are additional factors that need to be considered when making predictions about the future. It’s possible that an increase in a region’s windiness could help counteract a rise in temperature, since wind helps to mix up the water.

“We don’t have any evidence of that in the Tanganyika region,” Cohen added. “But the importance is we need to look at these big, deep lakes in the tropics on a case-by-case basis and think about all the types of climate processes.”

What Trump gets wrong about energy in America

Obama has done more to save energy than any other president