THERE ARE NOW TWICE AS MANY SOLAR JOBS AS COAL JOBS IN THE US... 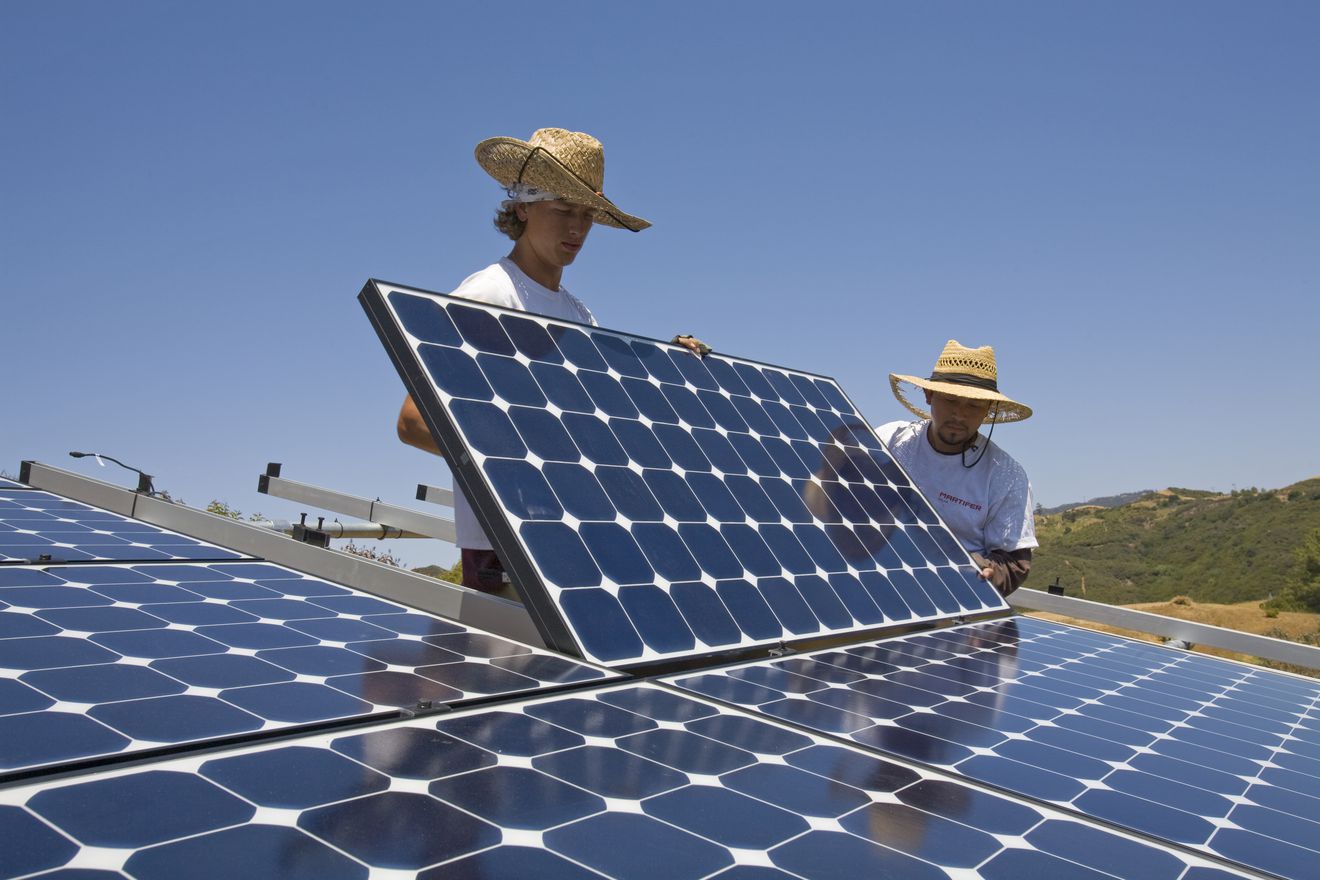 Green workers install a residential grid-tied solar array on a hillside in Malibu, California, USA. (Citizen of the Planet/Education Images/UIG via Getty Images)

It all adds up to a lot of jobs. Even though solar power still provides just a fraction of America’s electricity — about 1.3 percent — the industry now employs more than 260,000 people, according to a new survey from the nonprofit Solar Foundation. And it’s growing fast: Last year, the solar industry accounted for one of every 50 new jobs nationwide.

The chart below breaks it down by job type. The majority of solar jobs are in installation, with a median wage of $25.96 per hour. The residential market, which is the most labor-intensive, accounts for 41 percent of employment, the commercial market 28 percent, and the utility-scale market the rest:

To put this all in perspective: “Solar employs slightly more workers than natural gas, over twice as many as coal, over three times that of wind energy, and almost five times the number employed in nuclear energy,” the report notes. “Only oil/petroleum has more employment (by 38%) than solar.”

Now, mind you, comparing solar and coal is a bit unfair. Solar is growing fast from a tiny base, which means there's a lot of installation work to be done right now, whereas no one is building new coal plants in the US anymore. (Quite the contrary: Many older coal plants have been closing in recent years, thanks to stricter air-pollution rules and cheap natural gas.) So solar is in a particularly labor-intensive phase at the moment. Still, it’s worth thinking through what these numbers mean.

The pros and cons of solar’s rapid job growth

One argument you could make about these numbers is that all this employment is, in a way, inefficient. After all, if we want clean energy to take over the world and help us stop global warming, then we need it to be cheap. And one reason solar power remains (relatively) expensive is that it’s so labor-intensive — requiring more manpower per megawatt-hour than any other power source. The natural gas industry employs as many people as solar but provides nearly 50 times as much energy.

There’s something to that argument. If the solar industry hopes to keep pushing costs down and become a major US energy source, it will likely need to become less labor-intensive over time. Some of that will happen naturally as it scales up and installations are in place. But pushing solar costs down dramatically will likely mean things like automated plants, robots doing installations, self-cleaning glass, and so on down the road. A truly dominant solar industry might not produce the same stunning jobs numbers.

But labor costs are only one way to think about the issue. There’s also a political angle here. America’s energy system is inextricable from policy and politics, and an industry that creates a lot of jobs is inevitably going to have more influence over that process. Coal miners in Appalachia played an outsized role in the 2016 presidential campaign, and the coal industry has been able to lobby hard for legislation and regulations by using the jobs argument.

The solar industry doesn’t yet have the same political clout in Washington, DC, that the coal or petroleum industries do. (Renewable companies still spend way less on lobbying Congress than oil and gas firms do.) But as solar installations grow and more and more jobs are created, that’s rapidly changing. Notice that even though Donald Trump and other conservatives have criticized renewable energy, many Republicans now defend the production tax credits for wind and solar — in part because wind industries are now a significant source of jobs in key states like Iowa and Ohio.

On this front, one thing to note about the solar industry is that it’s still relatively concentrated by region. California has nearly as much solar capacity as the rest of the country combined — and accounted for about 34 percent of new installations in 2016 — so many of the jobs are located in a state that’s already liberal and concerned about global warming. But even this is slowly shifting. As the Solar Foundation report notes, states like Texas, South Carolina, New Jersey, New York, and Utah have seen strong solar job growth of late:

This political story will be one to watch in the coming years. Trump has bashed solar in the past, and his White House energy page makes no mention of solar power anywhere. But if the industry keeps adding jobs across the country — and solar power growth is expected to continue for the next few years, no matter what Trump does on climate policy — it’ll become tougher and tougher for him to ignore. If more and more states have a vested interest in clean energy, climate politics could start to shift, too.