THESE U.S. CITIES ARE MOST VULNERABLE TO MAJOR COASTAL FLOODING AND SEA LEVEL RISE...

In late October 2012, Hurricane Sandy took a sharp left turn into the coasts of New Jersey and New York, leading to 157 deaths, 51 square miles of flooding in New York City alone, and an estimated $50+ billion in damage (Bloomberg 2013; Kemp and Horton 2013). The name “Sandy” was retired, but risks to coastal cities for Sandy-like flooding remain. On the five-year anniversary of the storm, Climate Central has ranked the U.S. cities most vulnerable to major coastal floods using three different metrics:

Each analysis examined coastal cities with overall populations greater than 20,000. For the first one, we tabulated “at risk” population by overlaying 2010 Census block population counts against FEMA’s 100-year coastal floodplains (Crowell et al 2013) using methods adapted from Strauss et al (2012). FEMA 100-year coastal floodplains factor in storm surge, tides, and waves, and include all areas determined to have an at least one percent annual chance of flooding. Based on locations meeting these criteria and population density, New York City ranked first, with over 245,000 people at risk, followed by Miami and then Pembroke Pines, also in South Florida. 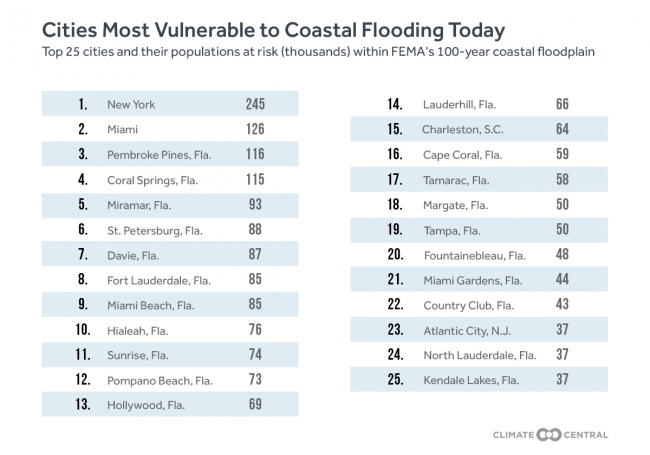 In our second analysis, we re-ranked cities based on which have the largest populations in the expanded areas that could be threatened in the year 2050 — due to sea level rise driven by climate change, plus nonclimatic factors such as local land subsidence. We determined these areas by using median local sea level rise projections for midcentury (Kopp et al 2014) under an unrestricted emissions scenario (“Representative Concentration Pathway 8.5”) to additively elevate the FEMA 100-year floodplain, and accordingly extend it as topography allows, following methods detailed in States at Risk: America’s Preparedness Report Card Technical Methodology. After this adjustment, New York City still had the greatest number of people on threatened land, followed by Hialeah, Florida and Miami. 36 cities in Florida placed in the top 50. 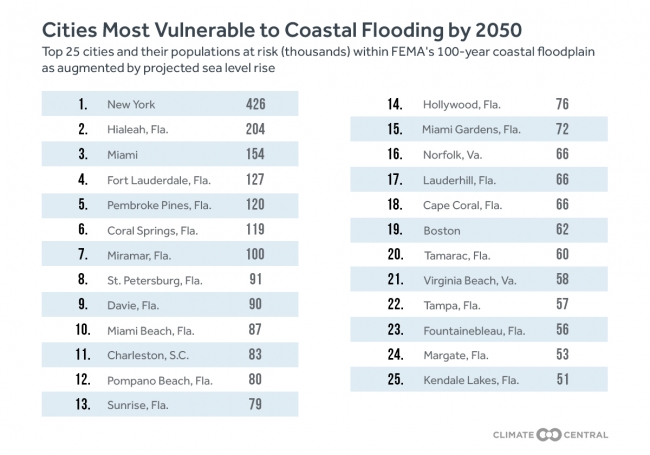 The top five cities with the greatest increase in population on land at risk when adding on sea level projections were New York City, with a difference exceeding 181,000, plus Hialeah, Boston, Fort Lauderdale, and The Hammocks, Florida. 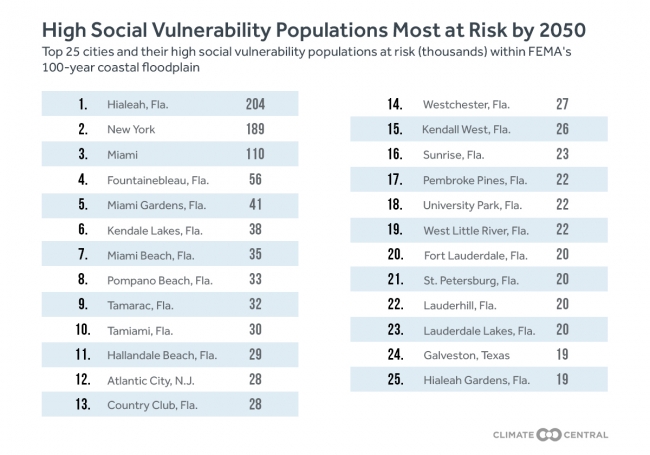 Sea level rise is a key indicator and consequence of climate change.