THIS FASCINATING SOCIAL EXPERIMENT SHINES A LIGHT ON THE ABSURDITY OF CLIMATE DISRUPTION DENIERS... 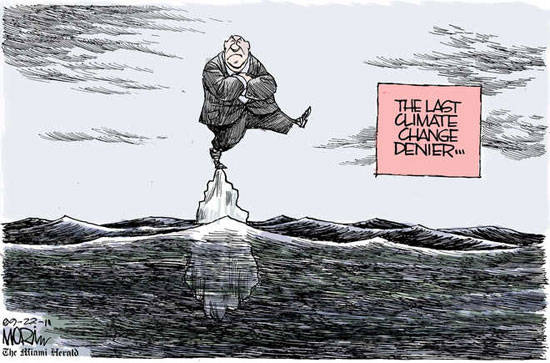 The world is getting hotter. But a lot of important people aren't "buying in."

Ron Burgundy had it figured out. GIF from "Anchorman."

Stop us if you've heard some of these common refrains:

"It doesn't feel like it's getting hotter." (Tell that to the glaciers, which are shrinking at an alarming rate.)

"But it's cold outside!" (News flash: One cold day in one city has nothing to do with global warming.)

Somehow it's still acceptable for our leaders to have a dissenting "opinion" on climate change despite the overwhelming evidence that it's real. And important.

Together with the folks at Unilever and the UN, we put together a fascinating social experiment designed to spotlight the absurdity of climate change denial.

Here's how it went down.

A handful of unsuspecting temporary employees were brought in to work for a company, but this wasn't a regular office — the other employees were actors.

Then there's this hilarious detail: The temporary workers arrived to find the thermostat broken and the temperature climbing throughout the day.

As the temp workers and the actors around them started to become unbearably hot...

... they finally decided it was time to speak up to the boss.

"I'm not positive that (the thermostat) is accurate."

"I personally can't do anything about it."

But finally, one guy says what we're all thinking.

OK, here's the scary part. A lot of the people in charge of making major decisions in our country are noted climate change deniers.

It's one thing to be casual about a broken thermostat. It's another to ignore substantial evidence that our planet is in big-time danger. How can we ever work toward effective solutions if the people in charge don't even believe global warming is happening?

Watch the whole video below, and let's all help get the word out that there's no good reason to still be in denial.