THIS IS NOT NORMAL, PEOPLE: ARCTIC AND ANTARCTIC HIT RECORD LOW SEA ICE...

Things in the Arctic are just getting weirder and weirder. And not in a good way...

Freakishly high air and ocean temperatures during November caused sea ice to trail far behind typical levels, with sea ice extent ending the month at a record low. Sea ice extent averaged 3.51 million square miles for the month, which was 753,000 square miles below the 1981-2010 average for the period, according to data released Tuesday by the National Snow and Ice Data Center (NSIDC) in Boulder, Colorado.

The section of missing ice was about the same size as the entire country of Mexico. Or to put it in terms of U.S. states, the missing ice is greater than the states of Texas, California, Montana and New Mexico combined.

During part of the month, sea ice actually declined when it would normally be growing with the arrival of the polar winter. The decline ate away 19,300 square miles of ice in an area of the Barents Sea, north of Norway, Finland and eastern Russia.

Sea ice extent compared to 1981-2010 average, with the arrow pointing to the dip in ice extent. Image: NSIDC

According to the NSIDC, this large decrease in ice extent is nearly unprecedented for the month since satellite records began in 1979, though a far smaller dip occurred in 2013.

Remarkably, November is the seventh month this year to hit a record low ice extent, falling unusually far below the average — 3.2 standard deviations, to be exact. November's ice extent was even more unusually below the norm than September 2012, which was when Arctic sea ice hit its all-time record low.

"It looks like a triple whammy—a warm ocean, a warm atmosphere, and a wind pattern all working against the ice in the Arctic."

The reasons for the record lows have to do with prevailing weather patterns that have been — and in fact still are — pumping unusually high temperatures into the Arctic, along with longterm human-caused climate change that is propelling sweeping changes across the Far North. In addition, climate feedback loops are making it harder for sea ice to recover from missing summer ice, since the ocean waters retain a memory of the ice loss in the form of added heat absorbed from the sun.

That heat is released relatively slowly during November, contributing to higher air temperatures and boosting precipitation in some areas through evaporation.

“It looks like a triple whammy—a warm ocean, a warm atmosphere, and a wind pattern all working against the ice in the Arctic,” said NSIDC director Mark Serreze, in a statement.

From northeast of Greenland toward Svalbard and Severnaya Zemlya in Norway and Russia, air temperatures averaged up to 18 degrees Fahrenheit above average for the month, which is an astonishingly large monthly anomaly. 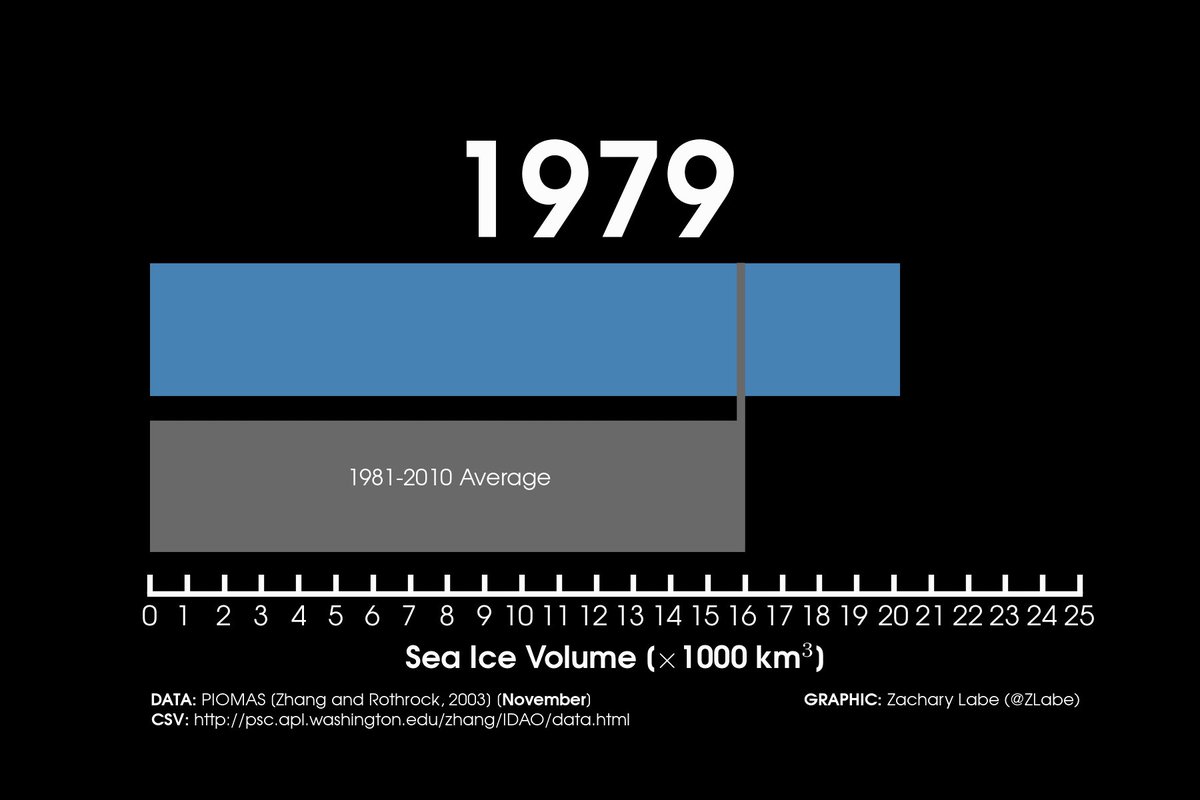 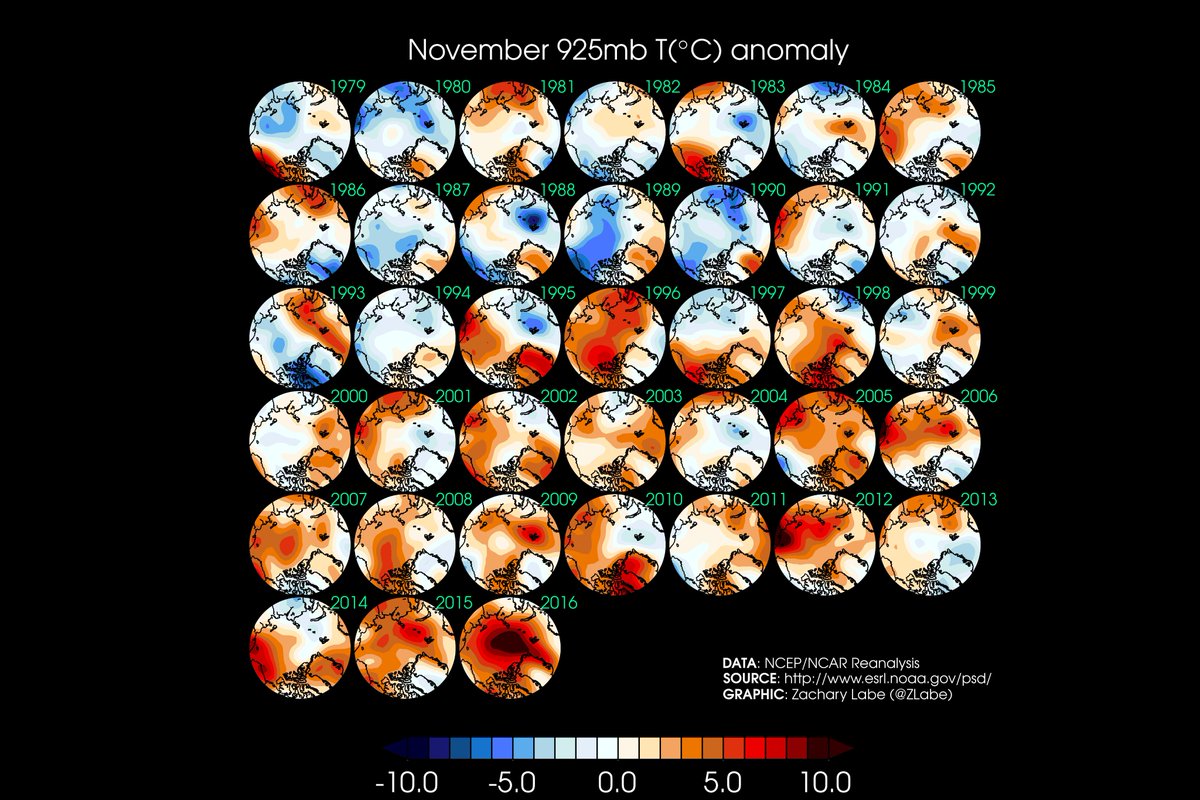 A look at the spatial distribution of November air temperature anomalies (925 mb) over the satellite era... (NCEP/NCAR reanalysis)

Julienne Stroeve, an NSIDC researcher, was in Svalbard during November and noted the lack of sea ice.

“Typically sea ice begins to form in the fjords at the beginning of November, but this year there was no ice to be found,” she said.

“It’s startling to see how little sea ice is out there right now — a frightening situation for Arctic wildlife such as walruses and polar bears that need sea ice habitat for feeding and breeding," Margaret Williams, managing director for US Arctic programs at the World Wildlife Fund said in a statement. "As what will likely be the hottest year on record comes to an end, Arctic temperatures have been off the charts."

The story of sea ice in the Southern Hemisphere has been radically different than that in the Far North, with a longterm increase in the sea ice surrounding the Antarctic continent. This has often been a talking point for those who doubt the mainstream science on human-caused climate change, since sea ice was growing.

However, in November, the bottom dropped out on Antarctic sea ice, hitting a record low due to a shift in circumpolar winds and record high temperatures.

The average extent for November was 699,000 square miles below the 1981 to 2010 average, which was more than twice the previous record departure from average set in November 1986 and a staggering 5.7 standard deviations below the longterm average.

“Antarctic sea ice really went down the rabbit hole this time. There are a few things we can say about what happened, but we need to look deeper,” said NSIDC scientist Ted Scambos said in a statement.

Overall, scientists remain more concerned about Arctic sea ice in a warming world, partly because it defines the circumpolar region. With Antarctica, the continent's land-based ice sheets are the bigger worry, since they could cause catastrophic sea level rise if they were to melt rapidly.

The Northern and Southern Hemisphere ice records mean that global ice extent has also hit a record low, but as the NSIDC noted, that metric is not useful for explaining what is going on at either pole, and is not an accurate way to track longterm ice trends due to global warming.