THIS MAP SHOWS WHAT DIFFERENT COUNTRIES VIEW AS THE GREATEST THREAT TO THE WORLD... 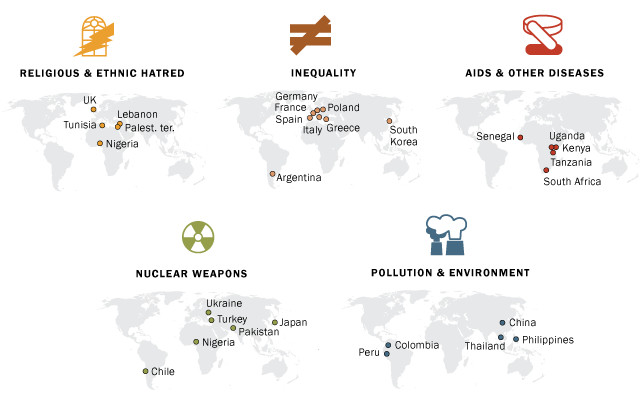 Different cultures span the globe — and with that comes different sentiments about fear...

To determine what global fears are, the World Economic Forum conducted a survey in fall 2015 to determine what the threats and risks for the next decade. This survey included over 700 experts and stakeholders from a variety of fields, including banking, government, and academia.

The top global risk in the next 10 years was determined to be "large-scale involuntary migration" — a divisive topic during the time the survey was conducted.

According to the Pew Research Center, the refugee crisis in the Middle East, particularly the influx of refugees from Syria, gave rise to polarizing news reports — from claims of sexual harassment in Germany, to the potential risk of terrorist infiltration in the incoming wave of refugees.

The risk that could have the greatest global impact was deemed the "failure of climate-change mitigation and adaptation."

In 2015, the Pew Research Center conducted a poll in which the majorities in all 40 countries it surveyed considered it a serious problem — the publics in 19 countries even deemed it the leading global threat. The fact that leaders from 195 nations attended a UN conference in December to discuss the rising global temperature may have played a role in the worried responses.

Western countries, including the US and parts of Europe, said the threat of ISIS was its top concern. After a series of terrorist attacks throughout the past year, fears of further attacks have spread — even the current political campaigns, both home and abroad, have centered on the problem.

In other parts of the world, including South America and parts of Asia, climate change is at the top of the list. Given China's and India's smog blanketing large portions of the country, it comes as no surprise that many respondents agreed that climate change is a persistent threat.

These global risks and threats appear to have dramatically shifted from the worrying state of the economy in 2007. Then, panic of a looming stock market crash and social movements addressing income inequality took precedence over the threat of ISIS. A man walks by a sign advertising currencies of an exchange office in Moscow, Russia. Alexander Zemlianichenko/AP

Russia, however, seems to be one of the few exceptions — economic instability remains its top concern. And although the global economy may not have been the overall highest concern among survey respondents, a recent PricewaterhouseCoopers survey of 1,300 top executives suggests that only 27% of them see the global economy improving in 2016.

Events across the world will no doubt bear some influence in this survey for the future. In particular, the failed coup in Turkey and the terrorist attacks in France suggests that the threat of ISIS may spread across Europe and remain a top threat for Western cultures. Additionally, increasing evidence of climate change and the actions of world leaders may satiate its effect.

Check out the full report from the Pew Research Center.

SEE ALSO: It has not been a good year for global-warming skeptics

NOW WATCH: Animated map shows the most dangerous countries in the world for tourists