A worker holds onto an ancient tree while taking research samples on the Tibetan Plateau, June 23, 2015. Duan Jianping for Sixth Tone

A new study shows that temperatures have been rising since the industrial revolution...

Climate change has made the Tibetan Plateau warmer than ever, according to meteorological records from as early as the 1950s. Now, researchers have found evidence that the rise in temperatures may have actually been underway since the industrial revolution.

In a report published Wednesday in the science journal Nature Communications, researchers studied tree rings and found that climate change affected the sparsely populated plateau as early as the 1870s.

Scientists from China and Europe analyzed samples taken from 153 Picea balfouriana trees, a type of spruce, which grow at altitudes of more than 4,000 meters above sea level and can live for more than 300 years. The researchers studied the width and density of the trees’ rings to calculate the seasonal temperature during the formation of each ring. 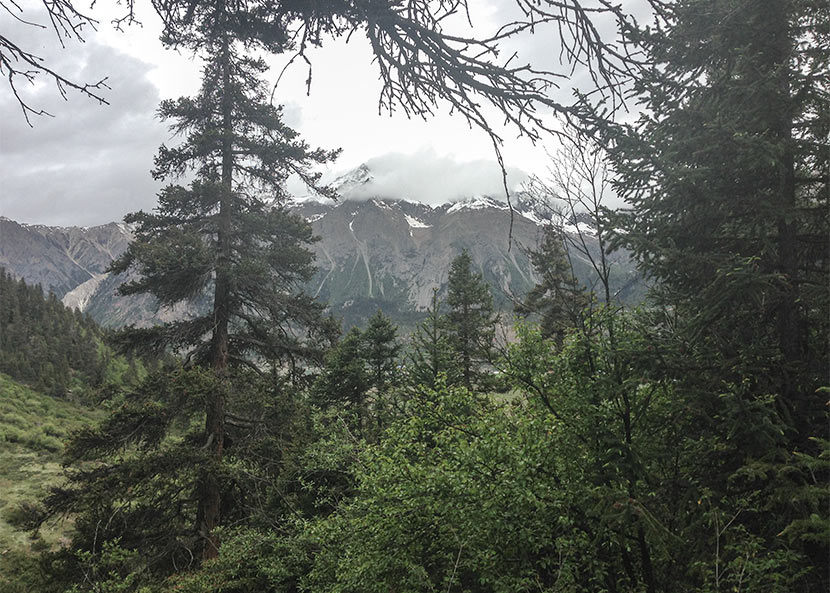 A Picea balfouriana tree, the focus of the tree ring study, stands on the Tibetan Plateau, June 23, 2015. Duan Jianping for Sixth Tone

Duan Jianping, a researcher at the Beijing-based Institute of Botany at the Chinese Academy of Sciences and one of the authors of the report, told Sixth Tone that the findings are in line with earlier studies. The temperature shift coincides with a rise in sulfate concentrations in the atmosphere, which earlier research found by looking at air trapped in ice on the Tibetan Plateau. Sulfates in the atmosphere are the result of burning fossil fuels like coal.

“We wondered if climate change existed at the beginning of the industrial era, especially in places far away from the industrialization,” said Duan. “The study shows it existed.”

Modern meteorological data indicate that the Tibetan Plateau is one of the regions of the world most sensitive to climate change. Between 1961 and 2012, its average temperature climbed more than 0.3 degrees Celsius per decade, a rate twice as high as the world’s average.

This rise in temperatures has already had tangible effects on the region. Whereas Tibet’s many glaciers used to be relatively stable, in 2016, warming of the climate is believed to have led to two giant avalanches — one of which killed nine herders.

Shi Yi
Jan 18, 2017
source: http://www.sixthtone.com/
original story HERE
If you would like to share this blog story on Facebook with one easy click, scroll down to the very bottom of this page and look for the SHARE button along with the Facebook LIKE button under the "Sign up to Learn About & Help End Global Warming” boxed area where people enter their email address. You do not need to enter any email address to use the one click Facebook SHARE button.
Get more of The Global Warming Blog. Bookmark this page and signup for the blog’s free RSS Feed. Sign up for free Global Warming Blog by clicking here. You will automatically be emailed a regular summary of the latest global warming headlines.
To learn about more about global warming, climate change or greenhouse gases as well as the causes, consequences, solutions, definitions, facts and tipping points related to these subjects, click here.
To see our most current positions, opinions, comments, agreement or disagreement with this article, and/or possible criticisms related to the subjects or facts raised in the above article, click here.  Then look for those subjects in the navigation links at the top the page.
To sign a critical petition for declaring an international global warming State of Emergency, click  here!