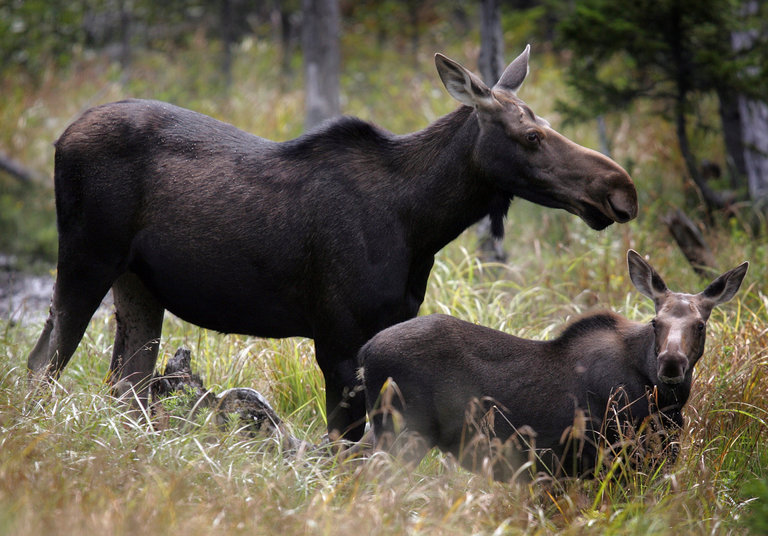 Moose grazing in Franconia, N.H., in the summer of 2010. Researchers say that over the past few years, about 70 percent of the moose calves they tagged in certain regions of northern New England have been killed by ticks. Credit Jim Cole/Associated Press

Several times a year, Nathan Theriault will be walking deep in the Maine woods and make a gruesome discovery: a dead moose, thin and crawling with ticks...

“They’re dying on the forest floor,” said Mr. Theriault, an outfitter and hunting guide in Eagle Lake, Me.

The moose is an iconic image in the Northeast and a crucial part of its tourism and recreational economy. But in parts of northern New England, researchers say moose are being killed by droves of winter ticks that thrive when the fall is warm and the winter comes late. By the thousands, the ticks attach themselves to moose — calves are the most vulnerable — and essentially drain their blood and strength.

Researchers say that over the last few years, ticks have killed about 70 percent of the calves they have tagged in certain regions, an indication that the tick is taking a significant toll.

“Climate change, as shortening winter, plays to the advantage of the tick,” said Peter J. Pekins, the chairman of the natural resources and environment department of the University of New Hampshire and a professor of wildlife ecology.

The high mortality rate is a finding from the first three years of a study, which now includes biologists in Maine, New Hampshire and Vermont, to track moose cows and calves with GPS collars and gather data about their health and survival.

“They’ve wasted away. They’re eating every day but they just can’t come up with enough protein to combat this blood loss,” Mr. Pekins said of the dead moose calves. He is overseeing New Hampshire’s part of the study.

Researchers in northern New Hampshire and in western Maine began tagging moose in 2014 — relying on skilled technicians called “muggers” to do the job. Working out of a helicopter, the team shoots a net gun at a moose, and then descends to blindfold it, collar it, take blood and fecal samples, and take a tick count. The process takes about 15 minutes.

When a moose in the study dies, researchers get a text message and set out — by truck, snowmobile and snowshoe — to gather blood and other samples. Over the course of the study, the month of April has brought so many deaths that researchers have taken to calling it “the month of death.”

“My phone has a special tone that says mortality,” said Lee Kantar, the state moose biologist for Maine. “One of the macabre tones.”

The study expanded last year to northern Maine — which Mr. Kantar said had a lower mortality rate of 48 percent — and to Vermont this month. There are about 250 moose collared for the study. 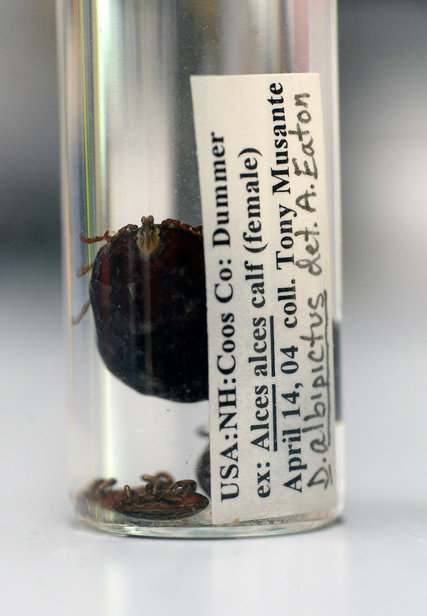 Moose ticks at the Maine Medical Center Research Institute in Scarborough. Ticks can attach themselves to animals by the thousands, draining them of blood and strength. Credit Shawn Patrick Ouellette/Portland Press Herald, via Getty Images

Winter ticks form enormous clusters, attach themselves to animals by the thousands and stay for their entire life cycle. Older moose try to rub them off against trees, breaking the hairs of their fur or even rubbing their skin raw in the process. Researchers call such animals “ghost moose” because they look white or patchy.

But calves, which can weigh about 400 pounds, are sometimes unable to withstand the blood loss from an infestation, and die in the spring.

Ticks “remove so much blood from the animal, the animal can’t replace it fast enough,” Mr. Kantar said, calling the process “pretty gruesome.”

Mr. Kantar said the study was about moose survival — not climate — although there appears to be a link between environmental conditions and the success of the winter ticks.

“Every single day when temperatures are above the norm in the fall is another day that the ticks are out there and able to get on a moose,” he said.

Meteorologists have recorded a series of moderate winters in New England over recent years.

“The general trend in the Northeast has been for warmer winters and less snowfall over the last 10 to 15 years,” said Eric Sinsabaugh, a meteorologist with the National Weather Service’s office in Gray, Me. “Of course that coincides with some of the warmest years we’ve had on record.”

Another factor in the spread of winter ticks, researchers believe, is the number of moose, which rebounded by the 1990s after they were decimated by human use of their habitat earlier in the century. More moose, researchers say, mean more hosts for ticks.

The biologists say that one possible way to control the problem, though counterintuitive, is increased hunting. If the moose population falls, researchers say, the ticks will have fewer hosts on which to feed, and their numbers will fall.

“Do you want a lot of moose that may be a little less healthy, than fewer moose that maybe are more healthy?” Mr. Pekins said. “It’s a real quandary.”

As the moose population has diminished somewhat in recent years, New Hampshire, Maine and Vermont have lowered the number of permits given to moose hunters, frustrating outfitters like Mr. Theriault, who has proposed hunting more moose in light of the infestations.

“It’s just going to be a long and brutal situation for them, until the habitat either changes or humans decide we just need to take more of these animals,” Mr. Theriault said.

Researchers say that if hunting does not increase and the weather does not change, the ticks’ own success in killing moose will eventually make life harder for them, too.

“We hope that the tick numbers are thus going to be reduced and at some point you get a new equilibrium of moose density,” Mr. Kantar said. “It’s just at a lower density.”