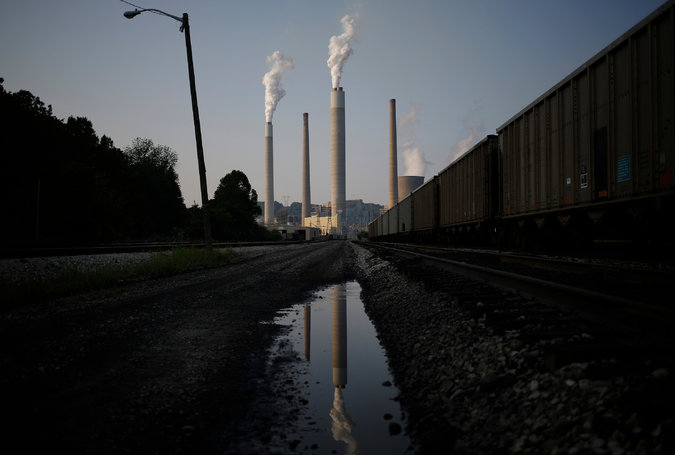 A coal-fired power plant in Winfield, W.Va. The E.P.A.’s Clean Power Plan, which aims to shift away from coal, has faced stiff opposition from politicians and corporations. Credit Luke Sharrett/Bloomberg

The climate agreement reached in Paris last weekend has been hailed as a landmark in the global effort to reduce greenhouse gas emissions, and it could well turn out to be one...

But the accord’s lofty goals won’t be achieved without large corporations making big changes. And while many companies have welcomed the deal and voluntarily pledged to cut emissions, the sweeping reforms required to avert a sharp rise in global temperatures will almost certainly require substantial new government regulations.

In the United States, the goal is to reduce greenhouse gas emissions 26 to 28 percent from 2005 levels by the year 2025. To achieve that, the Obama administration is being forced to count mainly on several laws that are already on the books, rather than pursue new regulation.

That’s because the Republican-controlled Congress has vowed to block any climate legislation and to rescind the laws already in place. Senator Mitch McConnell of Kentucky, the Republican majority leader, said last week that President Obama was “making promises he can’t keep,” warning that the Paris agreement “is subject to being shredded in 13 months” if Republicans win the White House.

Even the rules the president is counting on face challenges. For example, the Environmental Protection Agency’s Clean Power Plan is a major component of the president’s efforts. The plan pushes electricity generators away from coal and toward natural gas, and provides some incentives for renewable-power generation. It could make a significant dent in domestic carbon emissions, but it is being opposed in a number of states; the Senate has already voted to scuttle it, and the U.S. Chamber of Commerce sued to block it.

Another pillar of the administration’s plan is the enforcement of increasingly tight fuel efficiency standards. Already enacted by Congress, these rules force automakers to make a gallon of gasoline go further over time. Industrial manufacturers are also required to make appliances progressively use less energy. But falling gasoline prices and the renewed popularity of less efficient S.U.V.s have blunted fuel efficiency gains.

The effect of politics — and political horse trading — on these policies was underscored last week when members of Congress agreed to a deal that ended a ban on oil exports (helping the fossil fuel industry) but also extended tax credits for wind and solar industries. That move is expected to give renewable-energy industries a huge boost.

Local efforts, like California’s tougher climate laws, and the Regional Greenhouse Gas Initiative of several Northeastern states, are also essential to curb overall emissions. These programs are having measurable effects.

But these initiatives affect only a few industries, namely utilities, automakers and, to a lesser extent, industrial companies. Big consumer goods manufacturers, for example, might face higher energy costs in coming years, but are for the most part being spared any new climate regulation for now.

It is not even clear that these efforts will be sufficient to meet the Obama administration’s carbon reduction goals. In a recent paper, the climate researcher George David Banks argues that the emissions reductions possible through the current proposals will fall well short of what is needed to achieve the targeted reduction in emissions: For the administration’s goals to be achieved, new national regulations may well be necessary.

“The United States would need to regulate new sources and sectors of the American economy, particularly U.S. manufacturing, if the president’s target is to be met,” Mr. Banks wrote.

One approach that could deliver significant gains, and be introduced on a national scale and across industries, is a carbon tax, or carbon cap-and-trade system, which would establish a price for carbon emissions. California has a cap-and-trade program, as do a growing number of other countries. But national efforts have not gained traction in Congress.

For many business groups, the political gridlock preventing new climate laws is just fine. The National Association of Manufacturers expressed its “great concerns” over what policies will have to be put in place by the United States to honor the Paris agreement.

The U.S. Chamber of Commerce, a big-business advocate, dismissed the goals set in Paris. “None of the commitments made, including those by the U.S., are binding, and many aren’t even complete,” the group said in a statement. “Moreover, Congress must appropriate any funds that the Obama administration has pledged.”

The administration has set ambitious goals to reduce greenhouse gas emissions in the coming years, and it may well make some progress with the laws that are on the books. But so long as Congress and the White House are at loggerheads over climate policy, regulations that would prompt reforms throughout American business are likely to remain a pipe dream.