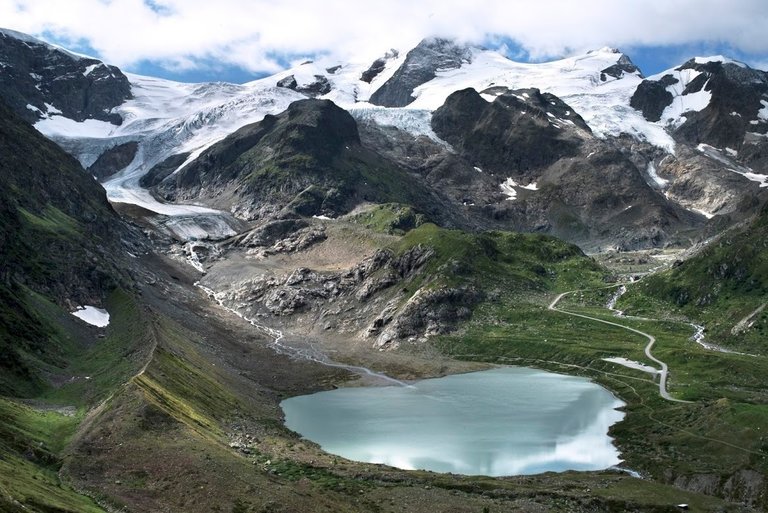 The Stein glacier in Switzerland in 2015. Scientists and photographers are returning to the world’s glaciers, and watching them shrink with each visit. Credit Matthew Kennedy and James Balog/Extreme Ice Survey, via Associated Press

In the delirious sci-fi thriller by the Korean director Bong Joon-ho, an attempt to engineer the climate and stop global warming goes horribly wrong. The planet freezes. Only the passengers on a train endlessly circumnavigating the globe survive. Those in first class eat sushi and quaff wine. People in steerage eat cockroach protein bars.

Scientists must start looking into this. Seriously.

News about the climate has become alarming over the last few months. In December, startled scientists revealed that temperatures in some parts of the Arctic had spiked more than 35 degrees Fahrenheit above their historical averages. In March, others reported that sea ice in the Arctic had dropped to its lowest level on record. A warming ocean has already killed large chunks of Australia’s Great Barrier Reef.

Let’s get real. The odds that these processes could be slowed, let alone stopped, by deploying more solar panels and wind turbines seemed unrealistic even before President Trump’s election. It is even less likely now that Mr. Trump has gone to work undermining President Barack Obama’s strategy to reduce greenhouse gas emissions.

That is where engineering the climate comes in. Last month, scholars from the physical and social sciences who are interested in climate change gathered in Washington to discuss approaches like cooling the planet by shooting aerosols into the stratosphere or whitening clouds to reflect sunlight back into space, which may prove indispensable to prevent the disastrous consequences of warming.

Aerosols could be loaded into military jets, to be sprayed into the atmosphere at high altitude. Clouds at sea could be made more reflective by spraying them with a fine saline mist, drawn from the ocean.

The world’s immediate priority may be to reduce greenhouse gas emissions to meet and hopefully exceed the promises made at the climate summit meeting in Paris in December 2015. But as Janos Pasztor, who heads the Carnegie Climate Geoengineering Governance Initiative, told me, “The reality is that we may need more tools even if we achieve these goals.”

The carbon dioxide that humanity has pumped into the atmosphere is already producing faster, deeper changes to the world’s climate and ecosystems than were expected not long ago. Barring some technology that could pull it out at a reasonable cost — a long shot for the foreseeable future, according to many scientists — it will stay there for a long time, warming the atmosphere further for decades to come.

The world is not cutting emissions fast enough to prevent global temperatures from spiking into dangerous territory, slashing crop yields and decimating food production in many parts of the world, as well as flooding coastal cities while parching large swaths of the globe, killing perhaps millions of mostly poor people from heat stress alone.

Solving the climate imperative will require cutting greenhouse gas emissions down to zero, ideally in this century, and probably sucking some out. But solar geoengineering could prove a critical complement to mitigation, giving humanity time to develop the political will and the technologies to achieve the needed decarbonization.

With Mr. Trump pushing the United States, the world’s second-largest emitter after China, away from its mitigation commitments, geoengineering looks even more compelling.

“If the United States starts going backwards or not going forward fast enough in terms of emissions reductions, then more and more people will start talking about these options,” said Mr. Pasztor, a former United Nations assistant secretary general on climate change.

While many of the scholars gathered in Washington expressed misgivings about deploying geoengineering technologies, there was a near-universal consensus on the need to invest more in research — not only into the power to cool the atmosphere but also into the potential side effects on the atmosphere’s chemistry and on weather patterns in different world regions.

While it is known that solar radiation management can cool the atmosphere, fears that field research would look too much like deployment have so far limited research pretty much to computer modeling of its effects and small-scale experiments in the lab.

Critically, the academics noted, the research agenda must include an open, international debate about the governance structures necessary to deploy a technology that, at a stroke, would affect every society and natural system in the world. In other words, geoengineering needs to be addressed not as science fiction, but as a potential part of the future just a few decades down the road.

“Today it is still a taboo, but it is a taboo that is crumbling,” said David Keith, a noted Harvard physicist who was an organizer of the conclave.

Arguments against geoengineering are in some ways akin to those made against genetically modified organisms and so-called Frankenfood. It amounts to messing with nature. But there are more practical causes for concern about the deployment of such a radical technology. How would it affect the ozone in the stratosphere? How would it change patterns of precipitation?

Moreover, how could the world agree on the deployment of a technology that will have different impacts on different countries? How could the world balance the global benefit of a cooling atmosphere against a huge disruption of the monsoon on the Indian subcontinent? Who would make the call? Would the United States agree to this kind of thing if it brought drought to the Midwest? Would Russia let it happen if it froze over its northern ports?

Geoengineering would be cheap enough that even a middle-income country could deploy it unilaterally. Some scientists have estimated that solar radiation management could cool the earth quickly for as little as $5 billion per year or so. What if the Trump administration decided to focus American efforts to combat climate change on geoengineering alone?

That wouldn’t work, in the end. If greenhouse gases were not removed from the atmosphere, the world would heat up in a snap as soon as the aerosol injections were turned off. Still, the temptation to combat climate change on the cheap while continuing to exploit fossil fuels could be hard to resist for a president who promised to revive coal and has shown little interest in global diplomacy.

As Scott Barrett, an environmental economist from Columbia University who was at the meeting in Washington, noted, “The biggest challenge posed by geoengineering is unlikely to be technical, but rather involve the way we govern the use of this unprecedented technology.”

These ethical considerations should be taken into account in any research program into managing the rays of the sun. Perhaps researchers should refrain from taking money from an American administration that denies climate science, to avoid delegitimizing the technology in the eyes of the rest of the world.

People should keep in mind the warning by Alan Robock, a Rutgers University climatologist, who argued that the worst case from the deployment of geoengineering technologies might be nuclear war.

But it would be a mistake to halt research into this new technological tool. Geoengineering might ultimately prove to be a bad idea for a variety of reasons. But only further research can tell us that.

The best way to think of the options ahead is as offering a balance of risks. On one plate sit whatever pitfalls geoengineering might bring. They might be preferable to the prospect of radical climate change. Thinking in terms of delirious sci-fi fantasies, the trade-off won’t necessarily be between cockroach protein bars and some happy future of cheap, renewable energy. It is more likely to pit cockroach treats against some dystopian, broiling world.