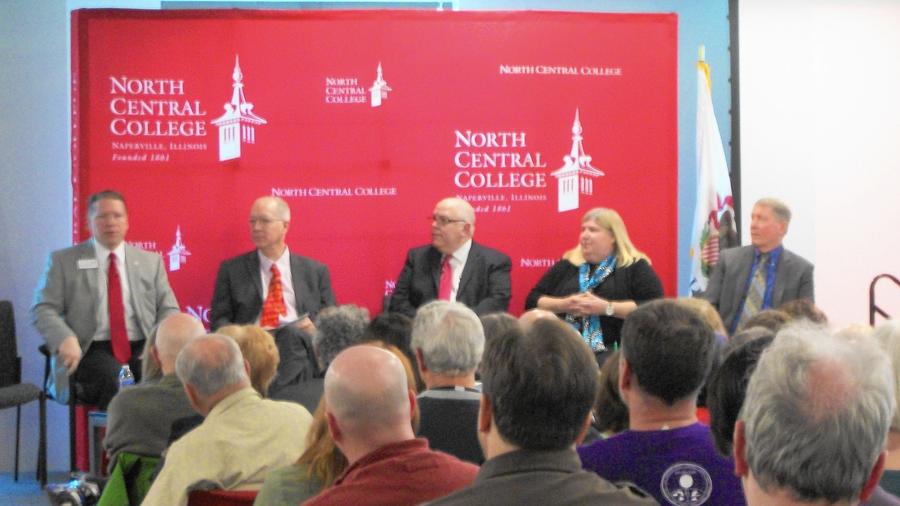 One of Chicago's most venerated meteorologists joined a Naperville congressman, several scientists and a former EPA regulator at North Central College Saturday to discuss climate change data and urge individuals to take action...

"I didn't come to my current view on climate change easily. I was skeptical," WGN-TV meteorologist Tom Skilling told the sold-out audience of 200. He explained how science can prove that greenhouse gases change the jet streams, which in turn affect weather. These changes are leading to more powerful hurricanes, more damaging tornadoes and more severe flooding, he said.

"It's costing money and lives," said Skilling, who showed slide after slide of graphs, charts, models and pictures that he said were proven evidence of climate change, including time-lapse photos over seven years that documented large sections of glaciers in Alaska melting.

Skillings' position contrasts that of President Donald Trump, who has denied that global warming exists and at one point time described it as a concept "created by and for the Chinese in order to make U.S. manufacturing non-competitive."

"Climate deniers capitalize on the unknown," Argonne National Labs meteorologist Doug Sisterson said. He and other speakers acknowledged that while much remains unknown about the issue, some things have been proven and are accepted as fact among the majority of scientists.

"It's real and largely due to human activity," said U.S. Rep. Bill Foster, D-Naperville, who has a doctorate degree in physics from Harvard University. Foster compared the current debate between sustainability proponents and climate deniers as analogous to the smoking debate, when efforts to prohibit smoking in airplanes, restaurants and offices were stymied by testimony from tobacco company scientists who claimed smoking does not cause cancer. 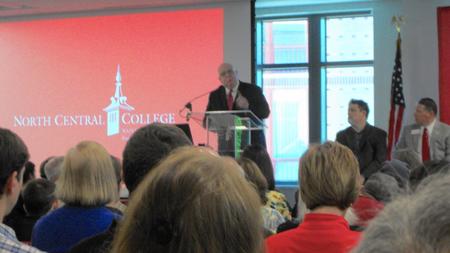 WGN-TV meteorologist Tom Skilling told an audience at North Central College on Saturday he was initially skeptical of climate change but there is now definitive proof that warming is occurring due to greenhouse gases and that severe weather changes are occurring as a result. (Diane Moca / Naperville Sun)

"Even when science was clear on smoking, it took decades because there was money on both sides of the debate," said Foster, the only member of Congress with a doctorate in a science field. "There was a very concerted effort to develop fake science and to basically bribe politicians not to take actions. It's not OK for Americans to die needlessly for the profit of one industry."

"We can't predict if or when someone who smokes gets cancer, but you know it's dangerous," Skilling said. "We know if you mess with the way the planet warms, you will affect weather. We're seeing consequences already."

"The cost of inaction is enormous," Foster added.

He expressed concern that the Trump administration has removed climate change references and climate data from government websites run by the Environmental Protection Agency, including one page that existed for nearly 20 years to explain what climate change is and how it works.

Foster recommended audience members "take action as communities and individuals. It does add up." Foster cited as examples steps taken by the Aurora City Council to reduce pollution and energy consumption and a declining demand for electricity in Illinois after the elimination of incandescent bulbs in favor of more energy-efficient LED bulbs.

North Central President Troy Hammond touted renewable energy projects at the college, including one of the largest rooftop collections of solar panels at any small college in the country. Foster urged the crowd to "support local businesses that have made a commitment to green" practices.

"Greenhouse gas emission is almost eight percent down," said Mary Gade, former regional administrator for the EPA's Region V, which includes Illinois. "The economy has switched in the last 10 years from one being fueled by coal to one fueled by natural gas," said Gade, noting that 3.3 million jobs have been added in clean energy professions.

"A president can come in and, with the stroke of a pen, erase years of work," Skilling said. "It's shocking and horrifying what's being proposed. People formulating policy have no science background."

Skilling said Trump's businesses understand the threat of climate change, showing a picture of Trump's golf course in Scotland that applied for a permit to build a sea wall to protect it from the Atlantic Ocean. Skilling said climate change is causing average global sea levels to rise.

"If we don't do something now, we will be at a tipping point and won't be able to change it," Gade said.

"Collectively, you can make a difference," she said. "Think about your contribution and the electoral process of 2018."

Diane Moca is a freelance reporter for the Naperville Sun.