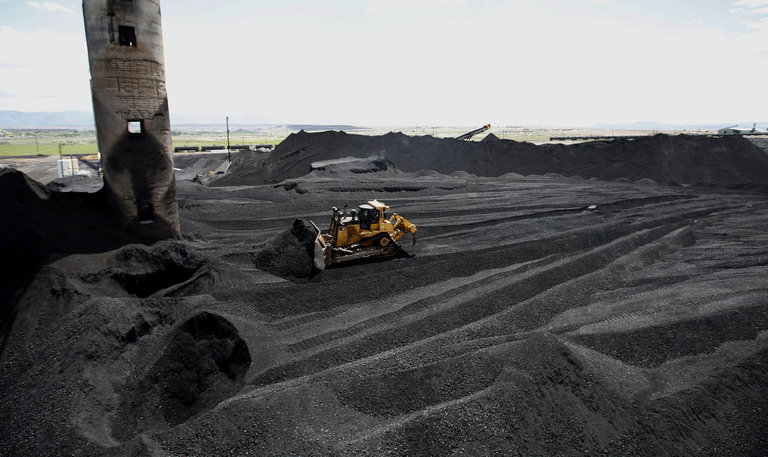 A bulldozer moving coal at a processing facility in Price, Utah. President Trump campaigned with a promise to “cancel” the Paris agreement, which binds countries to combat global warming. Credit George Frey/Bloomberg

WASHINGTON — The White House is fiercely divided over President Trump’s campaign promise to “cancel” the Paris agreement, the 2015 accord that binds nearly every country to curb global warming, with more moderate voices maintaining that he should stick with the agreement despite his campaign pledge...

Stephen K. Bannon, Mr. Trump’s senior adviser, is pressing the president to officially pull the United States from the landmark accord, according to energy and government officials with knowledge of the debate. But, they say, he is clashing with Secretary of State Rex Tillerson and the president’s daughter Ivanka Trump, who fear the move could have broad and damaging diplomatic ramifications.

Mr. Trump vowed on the campaign trail to tear up President Barack Obama’s global warming policies, and on the home front he is moving aggressively to meet those pledges with deep cuts to the Environmental Protection Agency and a new E.P.A. administrator, Scott Pruitt, who is a skeptic of climate science.

Next week, Mr. Trump plans to sign an executive order directing Mr. Pruitt to start the lengthy legal process of unwinding Mr. Obama’s E.P.A. regulations for cutting greenhouse pollution from coal-fired power plants. Those regulations are the linchpin of the last administration’s program to meet the nation’s obligations to reduce climate emissions under the Paris agreement.

While the president cannot, as Mr. Trump suggested, unilaterally undo a 194-nation accord that has already been legally ratified, he could initiate the four-year process to withdraw the world’s largest economy and second-largest climate polluter from the first worldwide deal to tackle global warming. Such a move would rend a global deal that has been hailed as historic, throwing into question the fate of global climate policy and, diplomats say, the credibility of the United States.

But it would also demonstrate to his supporters that Mr. Trump is a man of his word, putting American coal interests ahead of a global deal forged by Mr. Obama.

On one side of that debate is Mr. Bannon, who as a former chief executive of Breitbart News published countless articles denouncing climate change as a hoax, and who has vowed to push Mr. Trump to transform all his major campaign promises into policy actions. 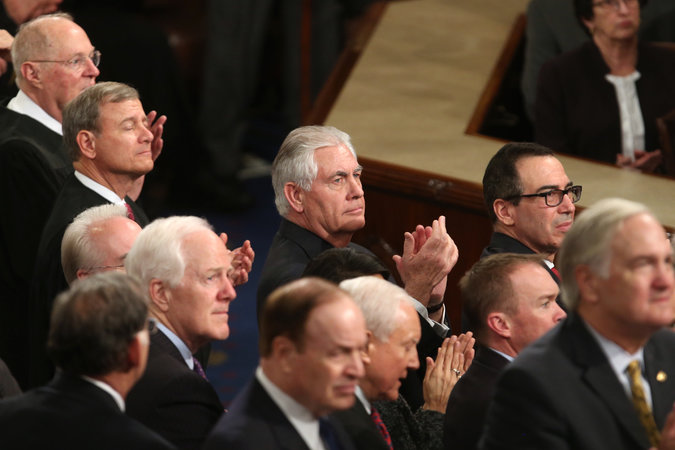 Secretary of State Rex Tillerson, center, is worried about the fallout if the United States withdraws from the accord. Credit Al Drago/The New York Times

On the other side are Ms. Trump, Mr. Tillerson, and a slew of foreign policy advisers and career diplomats who argue that the fallout of withdrawing from the accord could be severe, undercutting the United States’ credibility on other foreign policy issues and damaging relations with key allies.

Although Ms. Trump has not spoken out publicly for action to combat climate change, proponents and opponents of such action see her as an ally. Former Vice President Al Gore met with her during the Trump transition, and was ushered in by the “first daughter” to see the president-elect. The actor and activist Leonardo DiCaprio even slipped her a DVD copy of his climate-change documentary.

“President Trump Must Not Wobble on Climate Change — No Matter What Ivanka Says …,” blared a Breitbart post on Monday written by James Delingpole, who is close to Mr. Bannon and who leads the website’s coverage of climate-change policy.

Mr. Trump wants to make a decision by next week, say people familiar with the White House’s debate on the climate pact, in order to announce his executive order to undo Mr. Obama’s climate regulations in conjunction with his plans for the Paris deal.

According to leaked budget documents, the president will also propose killing off nearly two dozen E.P.A. programs, including the Obama-era Clean Power Program, climate partnership programs with local governments, Energy Star grants to encourage efficiency research in consumer products and climate-change research. Those would be part of a broader budget submission that would cut the E.P.A.’s funding by 25 percent, to around $6.1 billion from $8.2 billion, and its staff by 20 percent.

“If the goal is to fulfill the president’s campaign promises and implement his agenda, there is no value in staying in Paris,” said Thomas J. Pyle, an adviser to the Trump transition and the president of the Institute for Energy Research, an organization partly funded by the billionaire brothers Charles G. and David H. Koch, who have worked for years to undermine climate-change policies.

Mr. Trump has cited Mr. Pyle’s group as being influential in shaping his energy and climate proposals, including his campaign pledge to withdraw from the Paris deal.

“The two greatest obstacles to a Clexit (climate exit from U.N. Paris agreement) are probably Ivanka and Tillerson,” wrote Marc Morano, a former Republican Senate staff member who now runs Climate Depot, a fossil-fuel-industry-funded website that promotes the denial of climate science, in an email. “Tillerson with his ‘seat at the table’ views could be biggest proponent of not withdrawing the U.S. from the agreement.”

Mr. Tillerson is a former chief executive of Exxon Mobil, which, like many major global corporations, endorsed the Paris agreement. While his former company once denied human-caused climate change, it has more recently publicly acknowledged the threat posed by burning oil and supported proposals to tax carbon dioxide pollution.

Asked during his Senate confirmation hearing about the Paris accord, Mr. Tillerson said, “It’s important that the U.S. maintains its seat at the table about how to address the threat of climate change, which does require a global response.”

Under the Paris agreement, every nation has formally submitted plans detailing how it expects to lower its planet-warming pollution. The Obama administration pledged that the United States would reduce its carbon pollution about 26 percent from 2005 levels by 2025. However, that pledge depends on enactment of Mr. Obama’s E.P.A. regulations on coal-fired power plants, which Mr. Trump and Mr. Pruitt intend to substantially weaken or eliminate.

But under the Paris deal, those numerical targets are not legally binding, and there are no sanctions for failing to meet them. The only legal requirements of the deal are that countries publicly put forth their emissions reductions targets, and later put forth reports verifying how they are meeting the targets. It would be possible for the Trump administration to stay in the deal and submit a less ambitious target.

Even senior Republican voices in the foreign policy debate have said it may be wiser to stay in but keep a low profile.

“There’s really no obligation,” Senator Bob Corker, Republican of Tennessee and chairman of the Foreign Relations Committee, said in an interview. “It doesn’t require us to do anything. I think they may take a little time to assess whether pulling out makes sense now.” 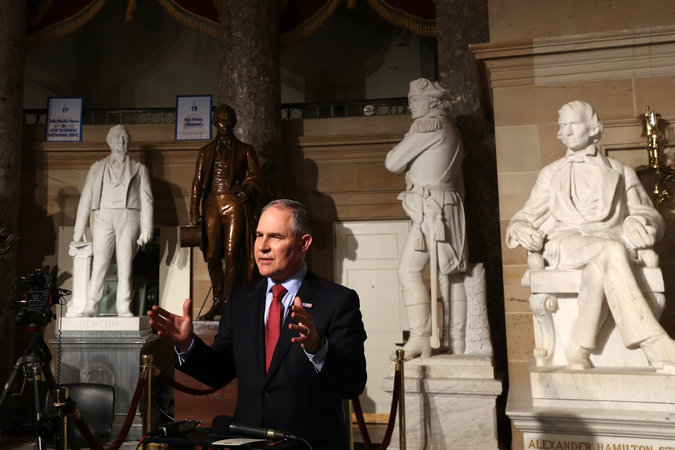 “I think it would be a major mistake, even a historic mistake, to disavow the Paris deal,” said R. Nicholas Burns, a retired career diplomat and under secretary of state under Mr. Bush.

“In international politics, trust, reliability and keeping your commitments — that’s a big part of how other countries view our country,” Mr. Burns said. “I can’t think of an issue, except perhaps NATO, where if the U.S. simply walks away, it would have such a major negative impact on how we are seen.”

The Paris deal is more consequential than Kyoto. Unlike that pact, which required action only from developed economies, the Paris agreement includes commitments from every nation, rich and poor, to cut emissions, including China and India, the world’s largest and third-largest polluters. Also, the science of climate change has become far more certain and the impact more visible in the 20 years since Kyoto. Each of the last three years has surpassed the previous one as the hottest on record.

Some of the United States’ closest allies are urging the Trump administration not to pull out. In a letter to Mr. Trump after he won the election, Chancellor Angela Merkel of Germany wrote, “Partnership with the United States is and will remain a keystone of German foreign policy, especially so that we can tackle the great challenges of our time.” They include, she wrote, “working to develop farsighted climate policy.”

As Mr. Trump and his advisers weigh their Paris options, one proposal is gaining traction, according to participants in the debate: Mr. Trump could declare that the Paris agreement is a treaty that requires ratification by the Senate. The pact was designed not to have the legal force of a treaty specifically so that it would not have to go before the United States Senate, which would have assuredly failed to ratify it.

“If there are camps forming in the White House, then let the people decide, the elected representatives,” Mr. Pyle said. “Let’s put the question to them.”

Proponents of that idea say it could shift some of the weight of the decision from Mr. Trump to Senator Mitch McConnell of Kentucky, the majority leader, at least in the eyes of some foreign diplomats, and of the president’s daughter.