Cars and damaged material is seen piled up at a local car dealership that was destroyed when a large tornado hit the area near Canton, Texas, on April 30, 2017. (Photo: Larry W. Smith, European Pressphoto Agency)

The number of deaths and damaged or destroyed homes caused by tornadoes in the U.S. could triple by the end of the century, and man-made climate change may not be entirely to blame...

Instead, the culprit is population increase and urban sprawl, according to a new study. Simply put, there will be more homes — and people — in the path of tornadoes.

We're already well on our way: In the past several decades, development in the lower 48 states more than quadrupled, said study lead author Stephen Strader of Villanova University's Department of Geography and the Environment.

"Disasters are socially constructed," he said, and we're "building ourselves into disasters."

Residents in tornado-prone regions should be more concerned with the construction quality of their homes than possible impacts climate change could bring, such as an increase in the number or intensity of twisters, neither of which have been concretely forecast, Strader said. To minimize the risk, homeowners and businesses should look at building storm shelters or safe rooms, he added.

Violent and deadly tornado outbreaks are a serious threat each year across the U.S., the most tornado-prone nation on Earth. So far this decade, the U.S. has endured 46 separate severe storm and tornado outbreaks that each caused more than $1 billion in damage, the National Oceanic and Atmospheric Administration said.

Tornado expert Harold Brooks of the National Severe Storms Laboratory, who was not involved in the study, said the research methodology and findings are sound.

"One of the things I really liked about it was its realistic look at the future exposure of human beings to tornadoes," he said. The increased footprint of where people live completely overwhelms any potential changes in the number of tornadoes, Brooks said.

Already this year, twisters have killed dozens of people in the U.S. In addition, nearly 700 tornadoes have been reported, more than 100 above average, the Storm Prediction Center reported.

In upcoming decades, the increasing number of homes, structures and developed land in tornado-prone regions such as the Southeast, Midwest and Plains will be at greatest risk, especially sprawling metropolitan areas such as Atlanta, Chicago, Dallas and St. Louis. Deaths are most likely in the Southeast because of it large suburban footprint, Stader said.

The study appeared in the peer-reviewed journal Climatic Change. 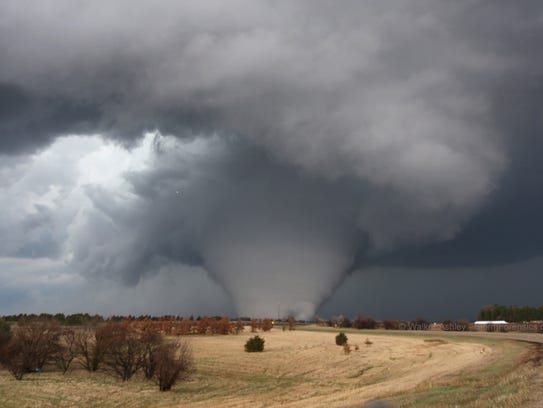