TRUMP CALLED 'THREAT TO EVERY COASTLINE' AS HE PUSHES OCEAN DRILLING PLAN... 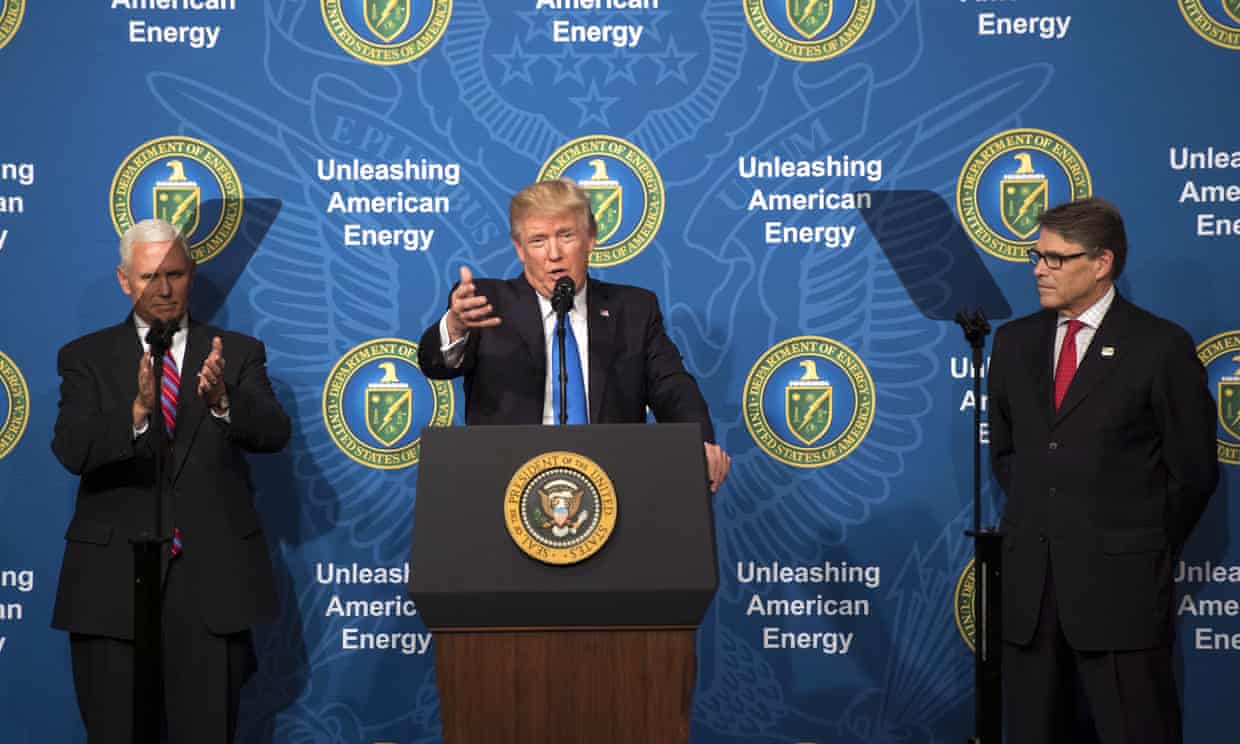 In a speech on Thursday, Donald Trump said: ‘The golden era of America is now under way. Believe me.’ Photograph: UPI / Barcroft Images

Administration moves to ‘unleash’ US fossil fuels by rewriting Obama-era plan that banned drilling along Atlantic seaboard and large parts of the Arctic Ocean...

Environmentalists have condemned Donald Trump as a “threat to every ocean and coastline in the country”, after the president pushed forward plans to expand oil and gas drilling in the Arctic and Atlantic oceans as part of what he called a new era of “American energy dominance”.

The Trump administration has taken the first steps to rewrite a five-year plan, put in place under Barack Obama, that banned drilling along the Atlantic seaboard and in large swaths of the Arctic. The interior department is opening a 45-day public comment period for a new plan that it says will help grow the economy. 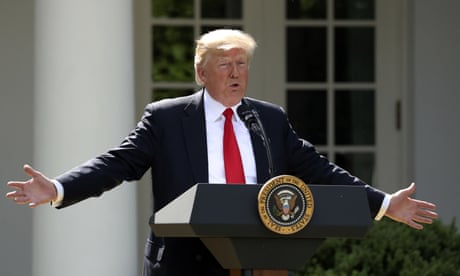 Green groups have promised in response to mobilize the coastal communities that successfully implored the Obama administration not to open up new areas to drilling, due to fears over the effect of potential oil spills and noise pollution upon livelihoods and wildlife.

“Trump’s appalling actions threaten every ocean and coastline in the country,” said Kristen Monsell, an attorney at the Center for Biological Diversity. “We’ll be fighting tooth and nail to make sure his disgraceful administration doesn’t endanger polar bears, whales, local economies and our climate with more dirty drilling.”

US crude oil and natural gas production have soared in recent years and several analysts have voiced doubts that many companies will be interested in offshore extraction, given the low cost of a barrel of petroleum and the falling cost of drilling on land.

However, in a speech on Thursday, Trump again promised to “unleash” American fossil fuels. The event was part of what has been touted by the administration as “energy week”, although the week was instead dominated by the healthcare debate and the president’s tweets about a TV host’s face.

Trump said the US had an “extraordinary energy abundance”, including “more than 250 years’ worth of clean, beautiful coal”. This bounty had been neglected due to Obama-imposed restrictions, the president said, adding that sweeping away various regulations would bring about “American energy dominance”.

“We will be dominant,” said Trump, whose administration has lifted a ban on new coal mining on public land, crafted an executive order calling for more offshore drilling and approved the controversial Dakota Access and Keystone XL pipelines.

“We will export American energy all over the world, all around the globe.”

The president said he “didn’t take any heat” over the pipeline approvals, despite subsequent climate-themed protest marches having attracted about 200,000 people to Washington DC.

On Thursday, the state departmentapproved permits for the New Burgos pipeline, which will run close to Penitas, Texas, and cross the border into Mexico. Trump said the pipeline, which will deliver 108,000 barrels of refined petroleum a day, would “go right under the wall, right?”

“You know, a little like this,” he added, with an undulating hand motion.

Trump’s speech, which did not mention climate change, was witnessed by an audience including the energy secretary, Rick Perry, and the Environmental Protection Agency administrator, Scott Pruitt.

Both men have recently dismissed longstanding scientific understanding that carbon dioxide is a primary driver of global warming. Pruitt was part of the effort to persuade Trump to exit the Paris climate agreement and is in the process of rewriting the clean power plan.

Caring about climate change: it's time to build a bridge between data and emotion

The fossil fuel industry welcomed Trump’s speech. Jack Gerard, chief executive of the American Petroleum Institute, said it was “critical” that the US developed offshore oil and gas along all of its coastlines.

“The US oil and natural gas industry has a long history of safe operations that have strengthened US energy security and contributed significantly to our nation’s economy,” Gerard said.

“It’s important that the next five-year plan includes the ability to explore our resources in the Arctic, Atlantic, and the eastern Gulf of Mexico, which would spur investment and economic activity, could create thousands of jobs, and provide billions in government revenue.”