TRUMP KEEPS SAYING THE U.S. MAY STAY IN THE PARIS CLIMATE ACCORD. AND THE MEDIA KEEPS BELIEVING HIM... 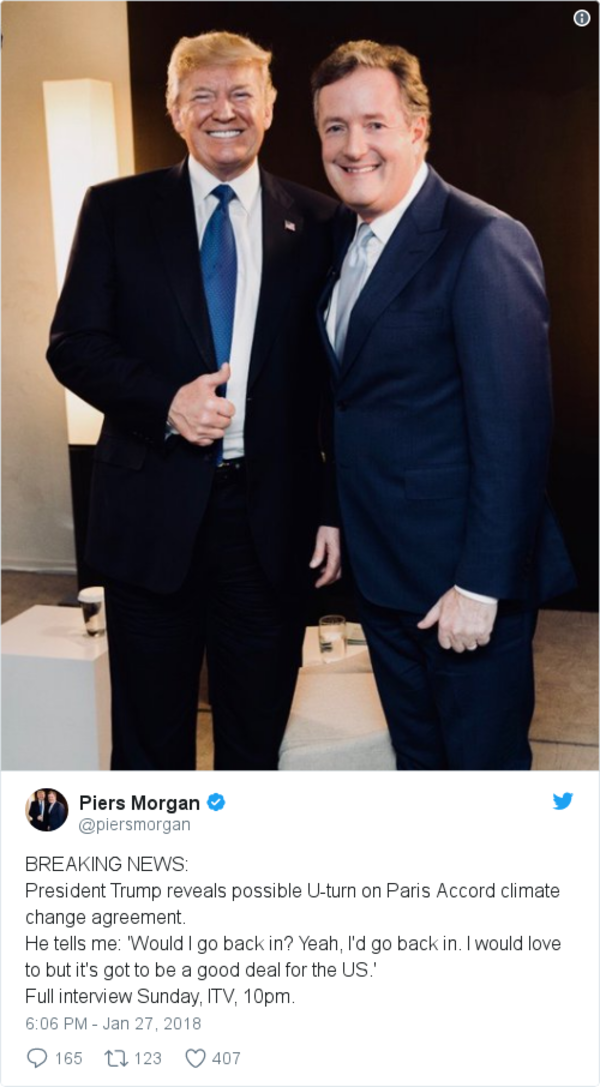 “The Paris accord, for us, would have been a disaster,” President Trump told Morgan in an interview for Britain’s ITV channel. “If they made a good deal … there’s always a chance we’d get back.”

The problem: The story was not breaking news. Far from it. Ever since announcing his intent to end U.S. participation in the Paris climate pact in a June speech in the White House Rose Garden, President Trump (or occasionally one of his deputies) will again and again signal a willingness to reconsider the U.S. decision to pull out of the Paris deal, a landmark agreement brokered by President Obama.

And again and again, nothing comes of the rhetoric, except a new round of media coverage light on interrogating the earnestness with which Trump wishes to reengage the Paris deal. This year, Groundhog Day came early.

--In July, shortly after that Rose Garden speech, Trump flew to France and celebrated Bastille Day with French President Emmanuel Macron. The French leader used the state visit to ply Trump about the international climate agreement brokered there. “Donald Trump listened to me,” Macron told a French newspaper. “He understood the reason for my position, notably the link between climate change and terrorism.” Macron added that Trump “said he would try to find a solution in the coming months.”

--In September, the European Union’s climate chief, Miguel Arias Cañete, told reporters during a climate-change meeting in Montreal that the “Trump administration is considering staying in the Paris agreement to fight climate change.” The media jumped on the possible policy shift. Quickly, however, National Security Adviser H.R. McMaster, along other White House officials, shot down any policy shift as a “false report.”

--And just this month, Trump said the United States could “conceivably” reconsider its Paris decision. “Frankly, it's an agreement that I have no problem with,” Trump cryptically said at a news conference, “but I had a problem with the agreement that they signed, because, as usual, they made a bad deal.”

The truth: Since he ditched the deal, Trump has insisted he is willing to renegotiate it. “We will start to negotiate,” Trump said in June, “and we will see if we can make a deal that’s fair. And if we can, that’s great. And if we can’t, that’s fine." Trump saying so again is not news.

That stance, however, has always been confusing. The Paris deal was designed to let nations set their own emissions targets — a feature some environmentalists saw as a flaw of the pact, but one its negotiators thought would allow the agreement to withstand a Republican president and avoid U.S. Senate ratification.  The Trump White House could have just set less ambitious targets going forward. And the targets themselves were always voluntary — meaning there would be no real legal consequence if Trump stayed in the agreement but missed them.

Trump has a well-documented history of telling people what they want to hear. When talking to Europeans — whether it is Macron or Morgan — the president has tried to paint himself as a pragmatist, sometimes by describing the details of an agreement or climate science in general inaccurately, and then carping about the invented provisions of the deal or scope of the problem.

Trump did it again in the Morgan interview on climate change. “There is a cooling, and there’s a heating,” he said. “I mean, look, it used to not be climate change, it used to be global warming. That wasn’t working too well because it was getting too cold all over the place.” In fact, two science agencies Trump oversees as president — NASA and the National Oceanic and Atmospheric Administration — have independently concluded this month that Earth just had its four hottest years on record.

Meanwhile, the unquestioning headlines trumpeting the idea that Trump could reeinter the Paris accord — such as the Guardian's “Donald Trump says US could re-enter Paris climate deal” — continue. We're waiting to see if the president actually makes good on his words.