Donald Trump regrets the “bizarre mistake” of withdrawing the US from the Paris climate agreement, Sir Richard Branson has said. The British billionaire also urged the president to help phase out the ailing US coal industry... 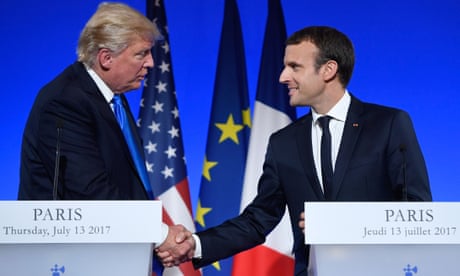 Speaking in Brooklyn on Friday, the Virgin Group founder said businesses and cities were firmly behind a transition to low-carbon energy, which made Trump’s decision to exit the Paris deal “very, very strange”.

“With climate change, it’s America first and our beautiful globe last, and that seems incredibly sad,” said Branson. “I’ve got a feeling that the president is regretting what he did. Maybe his children and son in law [adviser Jared Kushner] are saying, ‘Look, I told you so.’ Hopefully there is a positive change of mind.”

On Sunday, French president Emmanuel Macron said he was hopeful that Trump would reverse his decision, according to the newspaper Dimanche.

“(Trump) told me that he would try to find a solution in the coming months,” Macron told the paper, referring to meetings the two leaders had this week in Paris. “We spoke in detail about the things that could make him come back to the Paris accord.”

The US is set to become one of only three sovereign nations in the world not to be part of the Paris accord, which aims to stem dangerous global warming. Of the other two, Nicaragua feels the agreement does not go far enough, and Syria is mired in a disastrous civil war.

Branson said his companies would join the “We are still in” campaign – a coalition of hundreds of businesses, cities and universities committed to keeping to the US’s emissions reduction goals. Companies from Apple and Facebook to oil giants Exxon and BP urged Trump to stick with the Paris agreement, only for the president to fulfill his election pledge to jettison the pact.

"There’s no guarantee he’ll change his mind. Who knows what goes on in there. The Paris decision was a bizarre mistake"

“Trump had hundreds of the most influential business leaders in the world speaking to him and he ignored them, so there’s no guarantee that he’ll change his mind,” Branson said.

“Who knows what goes in there,” he added, pointing to his head. “The Paris decision was a bizarre mistake.

“You have people in America who believe the world was made 5,000 years ago. There are some strange people out there who have got into heady positions in the American government. You have the strange position of a cabal of people with very influential positions in America making these decisions.”

Branson admitted that he was unlikely to sway Trump, given his previous criticism of the president. In October, the British entrepreneur recalled a one-on-one lunch several years ago during which the future president explained how he was going to destroy five people who were unwilling to help him after one of his bankruptcies.

Branson said the lunch was “bizarre” and showed Trump’s “vindictive streak”. However, he said he would advise Trump to drop his pro-fossil fuels stance and help transition coalminers into new work.

“Coalmining is not the nicest of jobs,” Branson said, adding that in Britain miners have largely moved into jobs “far more pleasant, far less dangerous and far better for their health.

“I’d suggest that the government should help coalminers move into alternative jobs, such as clean energy. Clean energy needs hundreds of thousands of people. That would be good for the coalminers, good for America and good for the world.

“Now is the time to get massive investments into alternative energies. The vast majority of governments in the world are all still going in the right direction and companies in America are stepping into the breach.”

Branson was joined in a panel discussion by Andrew Liveris, chief executive of Dow Chemical and part of a group that advises the White House on manufacturing. Liveris said chemicals companies have moved on from “full frontal denial” of climate change and that businesses now grasp the seriousness of global warming. 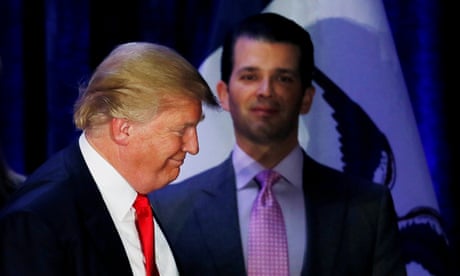 All the president's men's lawyers: who are Trumpworld's leading attorneys? Read more...

“We are leaving governments behind, it’s completely inverted,” he said. “I believe we will find a way back into Paris. That’s not coming from any deep knowledge, but because of the engagement on the issue.”

Branson was in New York to promote DS Virgin Racing, which competes in the Formula E electric racing series. Another of his companies, Virgin Atlantic, is part of an airline industry responsible for around 5% of global carbon dioxide emissions. He said cleaner fuel and more efficient plane designs were getting “closer step by step”.

“I was told 10 years ago it wasn’t possible to get across the Atlantic with a plane carrying a battery powered by clean energy before 2050, because of the weight of it and so on,” he said.

“But the way things are moving, it’s quite possible that a battery driven plane could carry a plane full of passengers across the Atlantic by 2030. The airline industry could tick that box [on reducing emissions] before some other industries.”