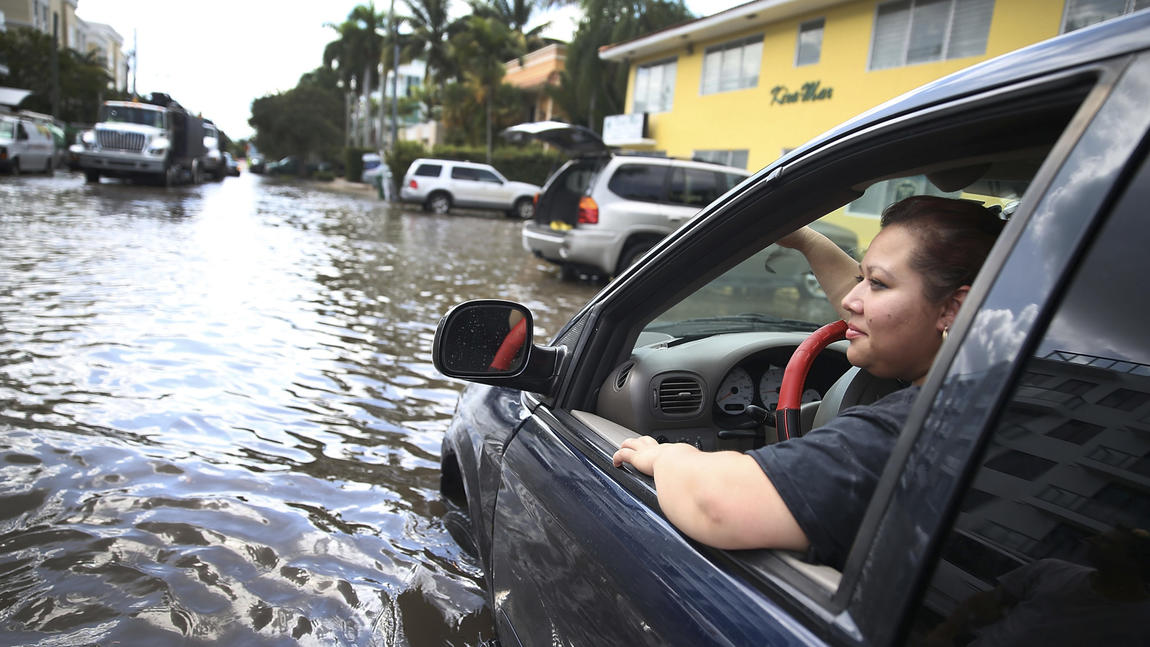 Sandy Garcia sits in her vehicle on a flooded street in Fort Lauderdale, Fla., on Sept. 30, 2015. (Joe Raedle / Getty Images)

By Donald Trump’s account, scientists have tricked Americans into accepting that global warming is caused by the burning of fossil fuels...

“I’m not a big believer in man-made climate change,” he told the Miami Herald on one of the rare recent occasions when he has talked about it.

A few blocks from the Miami Beach hotel where Trump spoke, water flooded over a seawall last year during the highest autumn tides, blocking traffic on one of South Florida’s main evacuation routes. The city is now elevating that street and many others as part of a $500-million program to protect itself from the rising ocean.

Coastal communities in the biggest presidential battleground state are adapting not just to the threat of global warming, but to the reality of it.

Trump’s rejection of climate science portends one of the most consequential changes in direction for the nation should he win the presidency.

The Republican nominee wants to withdraw the United States from the Paris climate pact, a nearly worldwide agreement to reduce the carbon emissions that cause global warming.

He has called for scrapping Obama administration rules that cut carbon pollution from coal-fired power plants. He plans to lift constraints on oil, gas and coal production, saying trillions of dollars in economic activity will follow.

President Obama, whose legislative agenda on climate change was thwarted by Republicans in Congress, pushed the boundaries of executive power to fight global warming, leaving his successor ample room to reverse course.

Like Obama, Trump’s Democratic rival, Hillary Clinton, regards global warming as an urgent threat. She has released plans to reduce carbon emissions, promote renewable energy and assist coal regions in recovering from the economic devastation brought on by the industry’s decline.

Trump spokeswoman Hope Hicks declined a request to interview Trump or one of his advisors on global warming.

"Snowing in Texas and Louisiana, record setting freezing temperatures throughout the country and beyond. Global warming is an expensive hoax!" — Donald Trump on Twitter, Jan. 28, 2014

His position puts him at odds with top energy companies. Exxon, Chevron, Shell and BP all acknowledge that burning of fossil fuels causes global warming. They encourage reduction of carbon emissions.

“Donald Trump lives in a parallel universe where the facts established by the scientific community to him don’t exist,” said Anthony Leiserowitz, director of the Climate Change Communication program at Yale University.

“The fact is that climate change is here and now. It’s not some faraway, distant problem that we’re not going to see for a generation or two.”

Carbon pollution has caused record-high temperatures globally in each of the first six months of 2016, according to NASA. Last year was the planet’s warmest on record.

With Florida, Georgia, Virginia and other coastal states beset by more and more high-tide flooding as the sea level rises, Trump has been muting his argument that climate change is not really happening. A shrinking minority of Americans, mainly conservative Republicans, share his opinion, polls show.

The impact is especially notable here, in the densely populated and nearly flat Miami region, which is built mostly on drained swamps. 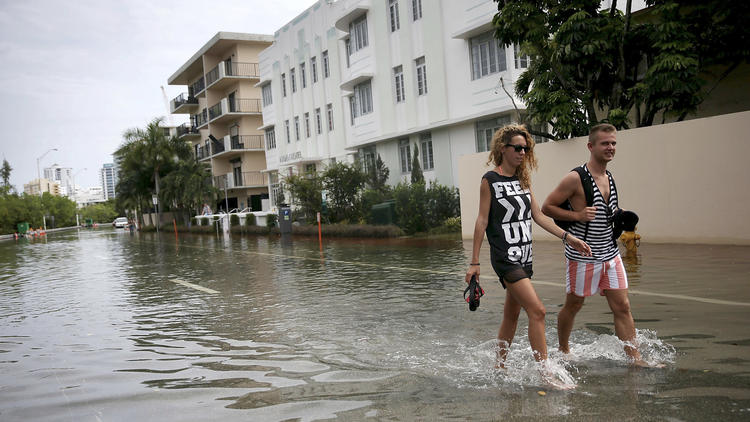 Over the last decade, streets in low-lying neighborhoods have begun flooding during the highest tides, usually when the moon is full around the fall equinox. The storm drain system, built on the assumption that gravity will carry water downward into Biscayne Bay, can’t function when the tide rises above street level.

Robert Diesel, 53, an airline chef who has lived in Miami Beach for 13 years, recalled one “king tide” that flooded a garage near his bay-front high-rise condo, destroying the cars parked inside. “They were just pulling out cars one after another and putting them on a flatbed,” he said.

Diesel’s neighborhood is one of the first where the city has started to elevate streets by several feet and install new pumps to empty storm drains.

“Frankly, this is a Band-Aid,” Diesel said. “I’m not an activist, but I am concerned.”

Bonnie Sherman, who rents out kayaks and paddleboards from her family’s shop in another bay-front neighborhood, Sunset Harbour, was disgusted by garbage and animal waste floating in block-long pools of seawater during the last king tides. A framed photo in the shop shows her brother, Michael, paddleboarding in the middle of the street.

At their father’s musical instrument store, the three steps at the entrance disappeared when the street was elevated; the front door is now level with the roadway.

“I guess eventually they’re just going to raise the entire city up,” she said. 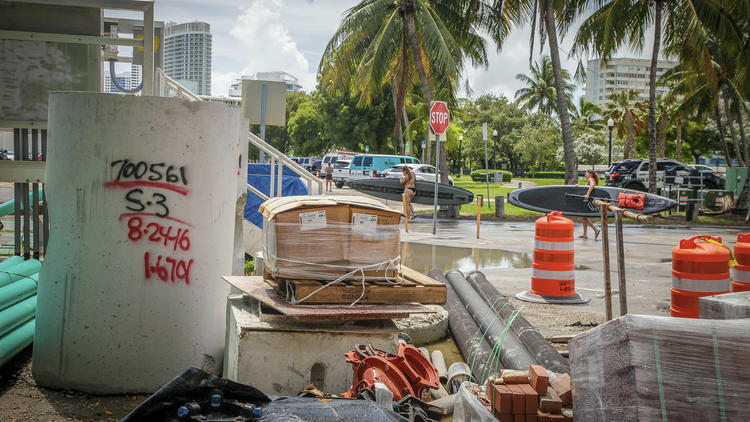 Purdy Avenue, along Maurice Gibb Memorial Park in Miami Beach, has been elevated because of a history of flooding. (Zak Bennett / For The Times)

Trump was on the other side of Miami Beach at the oceanfront Fontainebleau Hotel last month when he spoke with the Herald. He acknowledged that climate does change, but not as a result of human activity.

Asked about local efforts to cope with the rising sea level, Trump said, “If they’re doing the roads, and if they want to make them higher, I think that’s probably not the worst thing I’ve ever heard, if you’re going to do them anyway.”

Miami-Dade and three nearby counties have joined forces in a climate change compact. Using the 1992 local sea level as its benchmark, the group projects that it will rise 6 to 10 inches by 2030, and 31 to 61 inches by 2100. Scientists expect the pace to quicken as the melting of polar ice accelerates.

The rising ocean — it’s already 3 inches higher than it was in 1992 — has begun pushing saltwater into the shallow layer of highly porous limestone that contains the region’s groundwater. Some contaminated drinking wells are being replaced.

“We know the stakes,” said Mark Rosenberg, chairman of the Greater Miami Chamber of Commerce. “At 5 feet over current levels, much of suburban Miami, including Miami Beach, is completely submerged.”

To Doug Yoder, deputy director of the Miami-Dade Water and Sewer Department, the debate over climate science ended long ago.

“The only way that point of no return could be avoided would be to effectively address greenhouse gas emissions.” And that, he said, “has to be managed at a global scale.”

Trump, who owns several resorts in South Florida, has taken contradictory stands on climate change. In 2009, as world leaders gathered in Copenhagen for talks on a global climate pact, he joined other business leaders in signing an open letter to Obama and Congress.

Published as a full-page ad in the New York Times, it called for “meaningful and effective measures to control climate change” and warned of “catastrophic and irreversible consequences for humanity and our planet” if they failed to act fast.

Trump also endorsed the science of global warming in his May 2016 application for a permit to build a seawall at his golf resort in County Clare, Ireland, saying it was threatened by rising seas.

"In the 1920's people were worried about global cooling--it never happened. Now it's global warming. Give me a break!" — Donald Trump on Twitter, May 4, 2012

But from 2011 to 2014, Trump made  at least two dozen comments on Twitter mocking global warming, a theme he occasionally reprises in his campaign for president.

“We can’t destroy the competitiveness of our factories in order to prepare for nonexistent global warming,” he tweeted in November 2012.  “China is thrilled with us!”

The next day, he said the Chinese created the concept of global warming as a ploy to snatch U.S. manufacturing jobs. (Just a joke, he said years later.)

“I’m in Los Angeles and it’s freezing,” Trump wrote in 2013. “Global warming is a total, and very expensive, hoax!” Weeks later, he called it “a total con job.”

Trump’s commentary soon turned profane. In January 2014, he tweeted: “This very expensive GLOBAL WARMING bullshit has got to stop.”