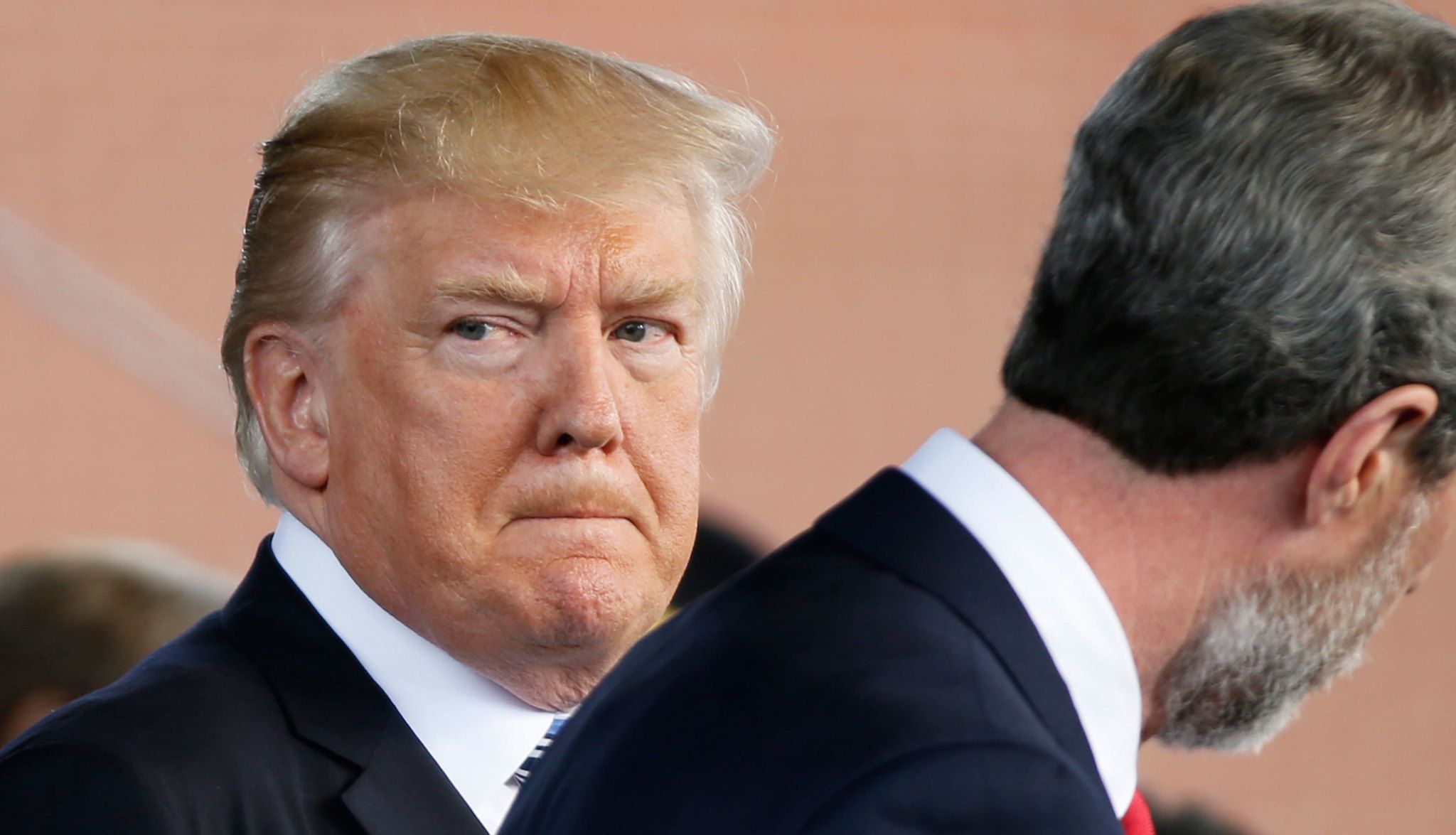 Some bettors think President Donald Trump will be dragged out of office soon rather than later, but it’s still a long shot. (Image: Steve Helber/Associated Press)

When President Donald Trump withdrew the United States from the Paris climate agreement, he acted in concert with 22 Republican senators, who collectively receive $10,694,284 in contributions from the coal and oil industries...

These 22 senators wrote to Trump, asking him to pull out of the accord. The president and the senators put their own political and economic interests above the safety, security and indeed survival of the American people and the entire planet.

The climate accord is a landmark deal, in which 195 countries responsible for 95 percent of carbon emissions worldwide agreed to voluntarily reduce their greenhouse gas emissions in order to slow down global warming.

Under the pact, the Obama administration promised to reduce greenhouse gas emissions 26 percent to 29 percent lower than 2005 levels by 2025.

But according to the Rhodium Group, Trump’s new policies will only cut emissions 15 percent to 19 percent below 2005 levels by 2025, considerably lower than the commitment made by the Obama administration.

The United States is the second largest purveyor of fossil fuels. China, which is first, and India, third, made significant commitments to cut their emissions as well. China is shutting down coal mines and plants and replacing them with solar plants and wind turbines. India is substituting solar panels for expansion of its coal companies.

The Climate Action Tracker (CAT), a consortium of four European research organizations, determined that “without any further action, the [United States, under the Obama pledge] will miss its commitment ‘by a large margin.’” The 2015 Clean Power Plan, which would shut down hundreds of coal-fired power plants, freeze construction on new ones, and replace them with new wind and solar farms, was one of the most significant programs in US climate action, according to the CAT.

But Trump signed an executive order in March, directing the Environmental Protection Agency to begin withdrawing from the Clean Power Plan.

Both China and India, on the other hand, are on track toward meeting their emissions goals, CAT found.

A study by the Grantham Research Institute concluded that the existence of the Paris climate agreement has caused dozens of countries to pass new laws requiring the use of clean energy.

Withdrawing From the Climate Agreement Is a Political Offense

Trump’s withdrawal from the climate agreement constitutes an impeachable offense.

The Constitution provides for impeachment of the president when he commits “High Crimes” and misdemeanors. They include, but are not limited to, conduct punishable by the criminal law.

Alexander Hamilton wrote in the Federalist No. 65 that offenses are impeachable if they “proceed from the misconduct of public men, or, in other words, from the abuse or violation of some public trust.”

“They are of a nature which may with peculiar propriety be denominated POLITICAL, as they relate chiefly to injuries done immediately to the society itself.”

“The Abuse or Violation of Some Public Trust”

No individual embodies the trust of the public more than the president, who is elected by the people. When the people choose their president, they are entrusting that person with their security, well-being and survival. The voters trust the president to act in their best interests and protect them from harm. By withdrawing from the climate agreement, Trump is violating the trust that “We the People” have placed in him.

Timothy Wirth, under secretary of state in the Clinton administration, told The Nation that Trump’s withdrawal from the pact was “a stunning moral abdication of responsibility to future generations.”

“Injuries Done Immediately to the Society Itself”

“We’ve watched Arctic sea ice vanish at a record pace and measured the early disintegration of Antarctica’s great ice sheets,” Middlebury College environmental studies professor Bill McKibben wrote in the New York Times. “We’ve been able to record alarming increases in drought and flood and wildfire, and we’ve been able to link them directly to the greenhouse gases we’ve poured into the atmosphere.”

In his analysis for Truthout, Dahr Jamail cites a recently published study showing that “the depletion of dissolved oxygen in Earth’s oceans is occurring much faster than previously believed.” Thus, he writes, anthropogenic climate disruption (ACD) “is now recreating the conditions that caused the worst mass extinction event on Earth, the Permian mass extinction that took place approximately 250 million years ago and annihilated 90 percent of life. Dramatic oceanic warming and acidification were key components of this extinction event, and these conditions align with what we are seeing today.”

Jamail adds, “Scientists have said that the U.S. withdrawal [from the climate accord] could add up to 3 billion tons of CO2 into the atmosphere on an annual basis.”

If the climate continues to change at a rapid rate, society itself will be injured. As the glaciers melt and the oceans swell, the land will recede. Crops will die. Mosquitos will increasingly carry diseases. The Earth will be hit with massive floods, devastating heat waves and drought. Polar bears will become extinct. People will lose their lands, their homes and their lives. Indeed, life as we know it will come to an end.

“To refuse to act against global warming is to condemn thousands of people to death and suffering today and millions more tomorrow. This is murder,” Mark Hertsgaard wrote in The Nation.

A Crime Against Humanity

Moreover, by withdrawing the United States from the climate accord, Trump has committed a crime against humanity, which also constitutes a High Crime.

Crimes against humanity can be committed even without a state of war. The Rome Statute for the International Criminal Court (ICC) defines crimes against humanity as “inhumane acts ... intentionally causing great suffering, or serious injury to body or to mental or physical health.” They must be “committed as part of a widespread or systematic attack directed against any civilian population, with knowledge of the attack.”

Since taking office, Trump has mounted a methodical assault on the people of the United States. He has systematically endeavored to destroy the social safety net, including the rights to healthcare, public education and a clean environment, as well as the rights of workers, immigrants, women and LGBTQ people.

By withdrawing from the climate agreement and refusing to shoulder the United States’ share of responsibility for slowing climate change, Trump has intentionally committed an inhumane act that will ultimately cause great suffering to the people of the world.

Although the ICC cannot directly prosecute and try climate crimes, the Office of the Prosecutor of the ICC said in a policy paper last year that it would construe crimes against humanity more broadly to include “destruction of the environment” and make prosecution of those crimes a priority.

According to the Center for Climate Crime Analysis (CCCA), a new nonprofit established to support the ICC prioritization of environmental crimes, “Climate crimes are criminal activities that result in, or are associated with, the emission of significant amounts of greenhouse gases (GHG). The CCCA does not aim to criminalize GHG emissions per se. Most emissions are legal. However, a significant share of GHG emissions results from, or is associated with, conduct that violates existing criminal law.”

The CCA notes, “Climate crimes are often intertwined with other serious international crimes. As a result of this link, as well through their impact on climate change, climate crimes may represent a threat to international peace and security and potentially affect all of humankind and the very foundations of civilization.”

Richard Harvey, a specialist in international criminal and environmental law, told Truthout, “Given what the ICC prosecutor and the Center for Climate Crime Analysis consider environmental crimes against humanity, Trump’s attempt to renege on this international agreement is a clear invitation to his Big Carbon cronies to continue policies designed to consign humanity to the greenhouse gas chamber. Is that conspiracy to commit a crime against humanity? You be the judge.”

By pulling out of the climate accord, Trump “makes himself guilty of what looks like a grave crime against humanity, the planet Earth, and future generations,” Uffe Elbæk, former Danish minister of culture and leader of Denmark’s Green Party, said.

Tom Engelhardt at TomDispatch calls the “system of destruction on a planetary scale ... the ultimate ‘crime against humanity.’” He writes, “It is becoming a ‘terracide.’”

The House of Representatives Should Impeach Trump

It takes 51 percent of the House of Representatives to impeach the president. Republicans control a majority of the seats in the House. But imperiling the planet should not be a partisan issue.

The fact that virtually every other country in the world, as well as U.S. states and cities, corporations and activists worldwide are taking steps on their own to slow the changing climate does not absolve Trump from his crime.

It is incumbent upon the House of Representatives to vote for the impeachment of Trump.

Meanwhile, we must, and will, continue to build the global climate justice movement.

Marjorie Cohn is professor emerita at Thomas Jefferson School of Law where she taught for 25 years. The former president of the National Lawyers Guild and criminal defense attorney is a legal scholar, political analyst and social critic who writes books and articles, makes media appearances and lectures throughout the world about human rights and U.S. foreign policy. She has testified before Congress and debated the legality of the war in Afghanistan at the prestigious Oxford Union. Cohn has also provided commentary for CBS News, BBC, MSNBC, CNN, Fox News, NPR and Pacifica Radio.