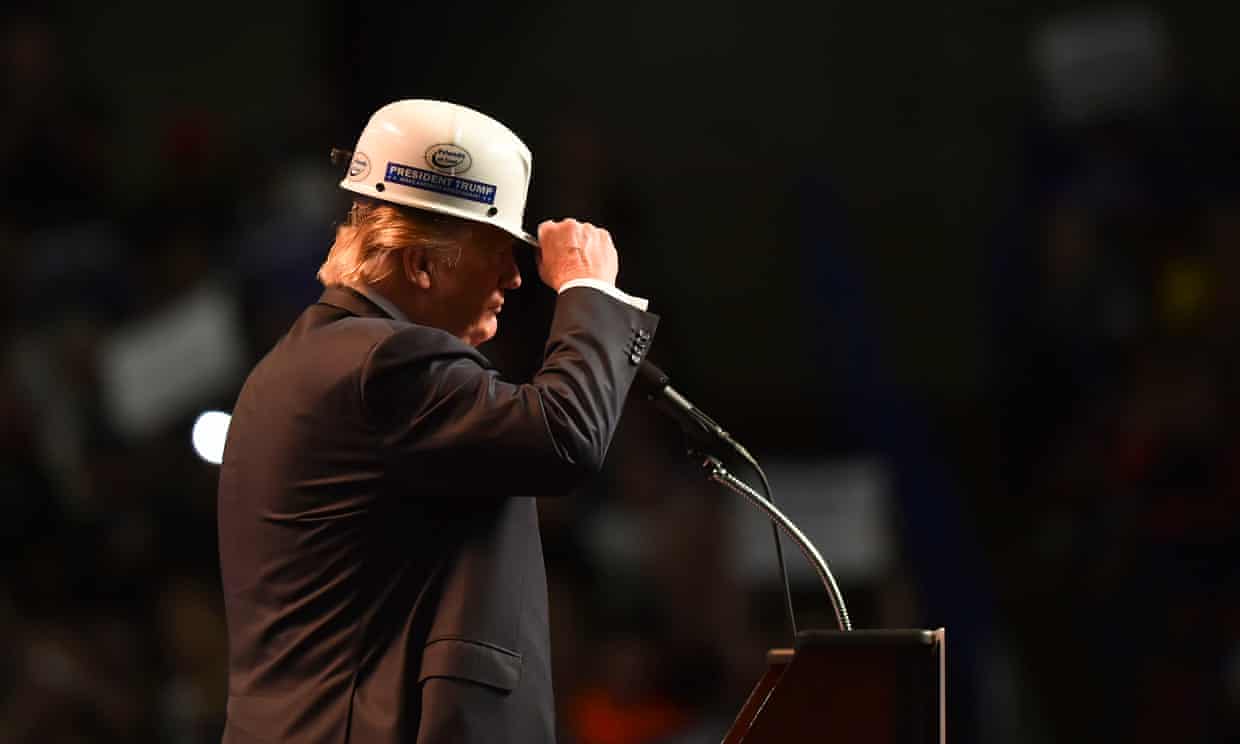 Donald Trump wears a coal miner’s protective hat while addressing his supporters during a rally at the Charleston Civic Center on May 5, 2016 in Charleston, WV. Photograph: The Washington Post/Getty Images

What does it say about the Trump administration that the president was fooled by a dumb, long-debunked climate myth?

As Politico reported, Trump’s deputy national security adviser, KT McFarland, gave him a fake 1970s Time magazine cover warning of a coming ice age. The Photoshopped magazine cover circulated around the internet several years ago, but was debunked in 2013. Four years later, McFarland put the fake document in Trump’s hands, and he reportedly “quickly got lathered up about the media’s hypocrisy … Staff chased down the truth and intervened before Trump tweeted or talked publicly about it”.

This particular myth – that most climate scientists in the 1970s were warning of an impending ice age – is wrong on three separate levels. First and most obviously, a majority of climate science research in the 1970s anticipated global warming, not cooling. 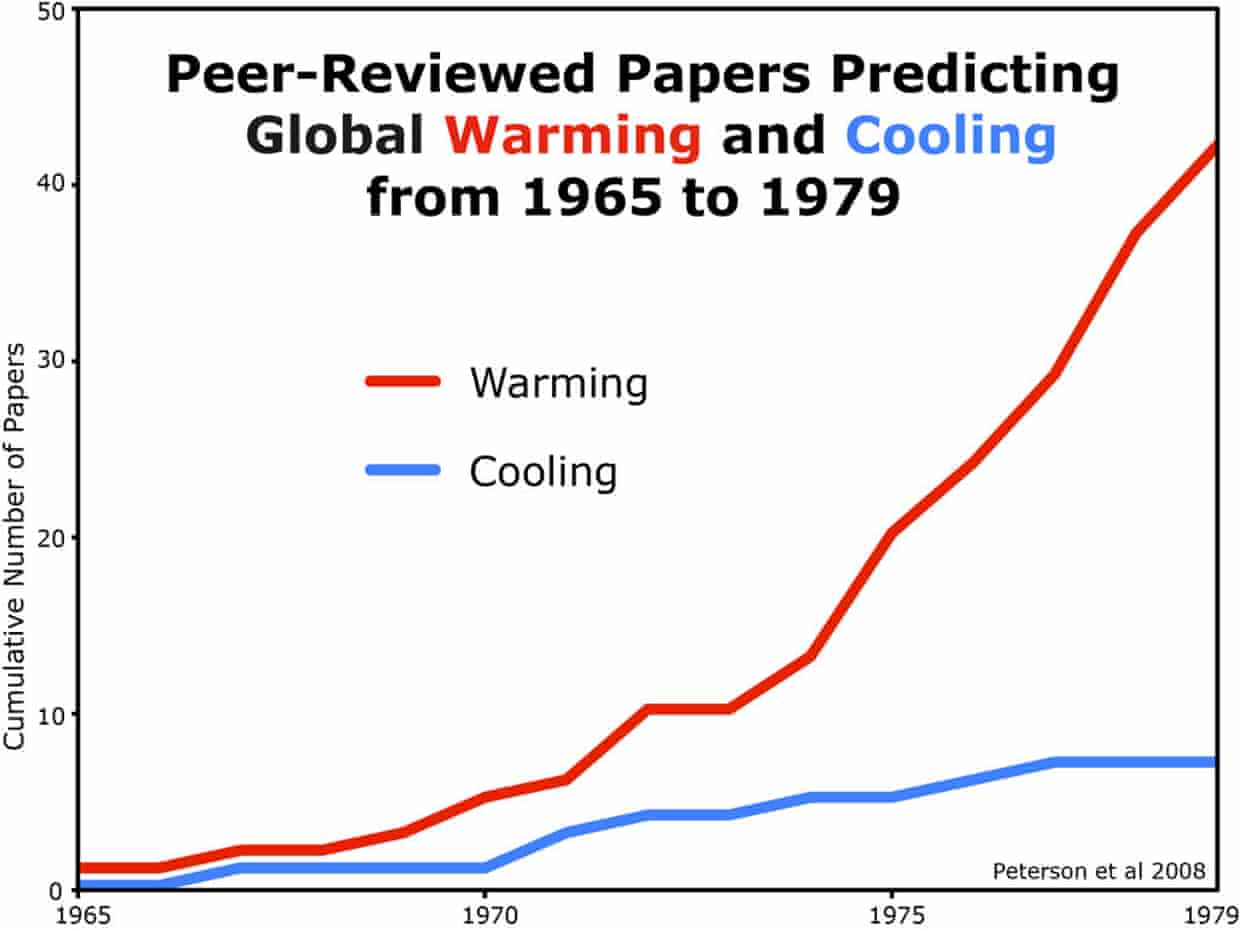 Second, there were some climate scientists whose research suggested that we could trigger an ice age – if human sulfur pollution were to quadruple. But that didn’t happen. In addition to blocking sunlight (and hence having a cooling effect), sulfur pollution causes other problems like acid rain. So various governments (including America’s) enacted Clean Air Acts to regulate that pollution (quite like the way we should be responding to carbon pollution’s dangerous impacts). Since then, human sulfur pollution has gone down, while carbon pollution has gone way up. The climate scientists weren’t wrong – the scenario they warned could have triggered an ice age didn’t happen because we took action to prevent it.

Third, although we’ve established climate scientists weren’t wrong in the 1970s, even if they had been, so what? Science advances, and we understand how the climate works today much better than we did 40 years ago, as illustrated in this funny video by Adam Levy:

To be blunt, this is a really dumb myth, and it says a lot that about the state of America’s government that the president was suckered into believing it.

The investigations swirling around Donald Trump – a short guide

KT McFarland is one of Trump’s many unqualified staffers

McFarland, second in command to Michael Flynn before he was ousted by scandal, was a Fox News analyst before Trump hired her. In fact, Fox appears to be where she developed the connections to Trump that led to her appointment in his administration. McFarland hadn’t worked in government since the 1980s, and many observers worried that she was unqualified for this important and influential position. As Media Matters reported:

McFarland, who spouted numerous misleading and bizarre comments during her time at Fox, is so unsuited for her deputy national security adviser position that retired Vice Adm. Robert Harward, an accomplished and decorated Navy vet, refused Trump’s offer to serve as national security adviser because he didn’t want her on his team. McFarland is now slated to be ousted from the National Security Council and nominated as ambassador to Singapore; she has already been “largely sidelined” at the agency

Ironically, Fox News’ Jon Scott interviewed Politico’s Shane Goldmacher about the fake magazine cover story, and noted “The president getting some fake news every once in a while, apparently, from his own staffers.” That fake news of course came from a former Fox News analyst and concerned one of Fox News’ favorite climate myths. In fact, a 2013 study found that Fox News is a major driving force behind climate denial.

Seven Democrats on the House Committee on Science, Space, and Technology wrote Trump a letter expressing concern that he is frequently being fooled by this sort of fake news. The committee members suggested:

If you appoint a qualified [Office of Science and Technology Policy] Director, you will have a reliable source of policy advice for matters related to science and technology, which forms the bedrock of our national security and economic power.

Indeed, most key government science and technology positions in the Trump administration remain unfilled. Recently, most members of one of EPA’s major scientific review boards were either fired or resigned in protest, with one saying “I can’t be a prop to bad science.” Scott Pruitt’s main qualification to lead the EPA was his 14 lawsuits against the agency. Rick Perry didn’t even know what the Department of Energy did when Trump nominated him for the job. Trump’s reported pick for chief scientist at the Department of Agriculture isn’t a scientist, and of course is a climate denier. The hits just don’t stop coming.

Of course, 61% of American voters thought Donald Trump was unqualified to be president (17% of whom voted for him anyway). We’re now seeing the consequences of an executive branch full of unqualified people who have approximately zero regard for science or facts. As Barack Obama put it, “you get the politicians you deserve.” Apparently we deserve political leaders who are utterly clueless about the most important existential threat the world faces today.