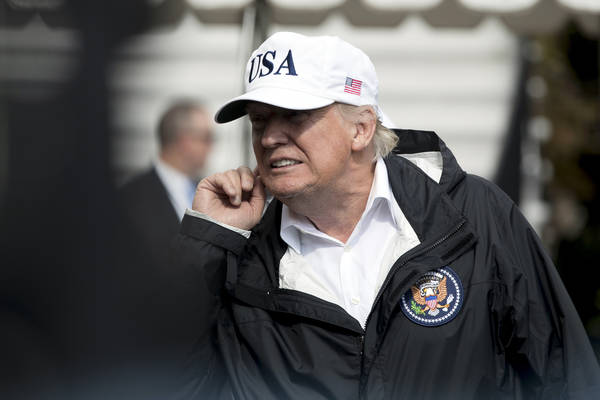 President Trump taking a question from the press in front of the White House after meeting with people impacted by Hurricane Irma in Florida. (AP Photo/Andrew Harnik)

Ahead of what would turn out to be a potentially record-breaking hurricane season, the National Weather Service had 216 vacant positions it could not fill due to a governmentwide hiring freeze imposed by the Trump administration, according to a recently released document...

Some of those Weather Service vacancies listed in the document, obtained by the Sierra Club through a Freedom of Information Act and shared with The Washington Post, were in locations that would be hit by the major hurricanes that barreled through the Gulf of Mexico and Caribbean.

Staffing levels at the federal government’s weather bureau, responsible for tracking hurricanes and warning the public about hazardous weather, have fallen since 2010 when the agency employed more than 3,800 nonmanagerial and nonsupervisory employees. Staffing had declined so much that the Government Accountability Office wrote in May that employees were challenged in their ability “to complete key tasks.”

The Weather Service’s head count finally stabilized in 2016, with the forecasting agency starting and ending the year with about 3,400 on-the-ground workers.

But the staffing dip resumed in 2017, falling from 3,425 in December to 3,368 in August, according to data from the National Weather Service Employees Organization, a union representing meteorologists and other NWS employees.

“There's no question that the hiring freeze had an effect,” said Dan Sobien, NWSEO president. “But really it was the straw that broke the camel's back.”

He added, “The camel was already weighed down to the ground.”

The National Oceanic and Atmospheric Administration, the Weather Service’s parent agency, said the hiring freeze played a part in the recent decline in the agency’s ranks ahead of the triplet of intense storms — Hurricanes Harvey, Irma and Maria.

“Yes, the hiring freeze was a contributing factor” for renewing that decline, NOAA spokesman Christopher Vaccaro wrote in an email.

But NOAA said its forecasting ability was not hampered by the shrunken staff.

“As already demonstrated during Harvey, Irma, Jose and Maria, NOAA is prepared for the hurricane season and is operating at full tempo,” Vaccaro said. “Our forecasters at NOAA's National Hurricane Center, local Weather Service offices, and river forecast centers and elsewhere in the agency are fulfilling the agency's mission of protecting lives and property as they issue timely and accurate forecasts.”

The Weather Service vacancies that could not be filled because of the hiring freeze, which ended for the agency in April, include two meteorology positions at the National Hurricane Center in Miami. Those posts remained unfilled as of mid-August, the agency said, right before Hurricane Harvey struck Houston. 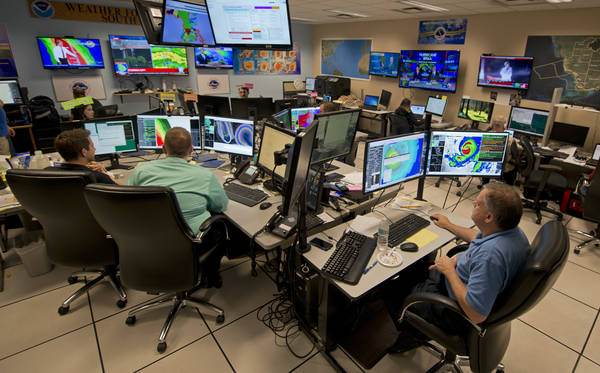 The freeze also prevented the Weather Service from hiring for two meteorology positions in Jacksonville, Fla., one meteorology position in Tampa and an electronics technician in Key West. NOAA said all those posts, each in cities hit by Hurricane Irma, have been filled.

Ahead of the storms, the Weather Service readied “preselected backup offices” to handle forecasting for offices in the path of hurricanes in case communication was severed, Vaccaro said. For example, the field office near San Antonio covered the duties of the Key West office when Irma hit. The Miami office stepped in for the San Juan office in Puerto Rico when Hurricane Maria struck.

The Weather Service said that 248 positions remain vacant at the agency. The empty desks are not limited to low-level employees.

The National Hurricane Center, a Weather Service division, has been led by an acting director since May. An acting career official is heading NOAA until President Trump nominates and the Senate confirms a permanent replacement. Trump has  waited longer than any other president to fill that role.

The vacancies at the Weather Service were numerous enough, even before Trump was inaugurated, for the GAO to audit the agency's hiring practices.

In May, it concluded that managers and employees “have experienced stress, fatigue, and reduced morale” because of the staff shortages." Because NOAA higher-ups make only “limited information” available on the status of hiring requests to those running Weather Service field offices, managers cannot “effectively plan and distribute workloads,” the GAO found.

In July, the Senate Appropriations Committee wrote in a report that lawmakers are “very concerned with the continued number of employee vacancies” even though Congress has provided enough money to fill them.

“People were literally getting sick from the workload,” Sobien, the union president, maintained.

But if the new administration gets its way, the Weather Service’s budget will not remain as flush. The White House has proposed cutting the agency's funding by 6 percent, which would include the loss of $62 million being used to update weather models and enable the agency to predict changing weather further out.