TRUMP SAYS WE'VE HAD 'BIGGER' HURRICANES. EXPERTS SAY IT'S NOT THAT SIMPLE... 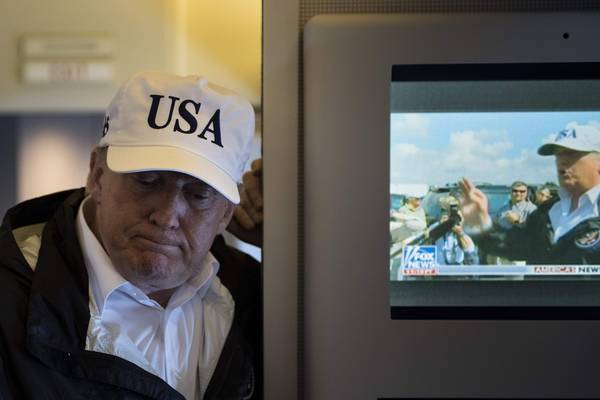 President Trump pausing while speaking to the press onboard Air Force One on Thursday. (BRENDAN SMIALOWSKI/AFP/Getty Images)

The back-to-back landfalls of two harrowing storms in Texas and in Florida have reignited both the scientific debate over the link between hurricanes and global warming and the political debate over what, if anything, to do to address climate change...

So far, the only Republicans willing to engage in either have been moderates or those representing low-lying coastal districts vulnerable to sea-level rise and storm surges. Members of President Trump's Cabinet, such as Environmental Protection Agency chief Scott Pruitt, have said that “it's insensitive” to discuss the “cause and effect of these storms” in the midst of the dual disasters of Hurricanes Harvey and Irma.

On Thursday, President Trump, too, was dismissive of any link between climate change and hurricanes. When asked on Air Force One whether the two recent storms have changed his view on climate change, Trump told reporters: “We’ve had bigger storms than this.” He went on talk about bigger storms that he said occurred in the 1930s and 1940s.

Video: Trump on climate change: 'Well, we've had bigger storms than this'

Hurricane patterns in the Atlantic basin, which includes the Caribbean and Gulf of Mexico, have long been a puzzle to scientists. Even so, hurricane researchers were perplexed by Trump's comment.

“That's just not correct,” Kerry Emanuel, a hurricane expert at the Massachusetts Institute of Technology told me.

Parsing Trump's comment begins with trying to understand what Trump means by “bigger.”

Because he brought up the 1930s, Trump perhaps had in mind the infamous 1935 Labor Day hurricane that, like Irma, devastated the Florida Keys. That storm was recorded as having the lowest air pressure of any hurricane on record in the United States.

But there are other statistics by which hurricanes can set records. Indeed, Hurricane Harvey went down in storm annals for having more rainfall than any other hurricane in the continental United States.

And Hurricane Irma maintained Category 5 wind speeds for longer than any other hurricane for which scientists have satellite data. Jim Kossin, a hurricane scientist at the National Oceanic and Atmospheric Administration and the University of Wisconsin at Madison, called the duration of Irma's high wind speeds “truly remarkable and unprecedented in the historical data.” 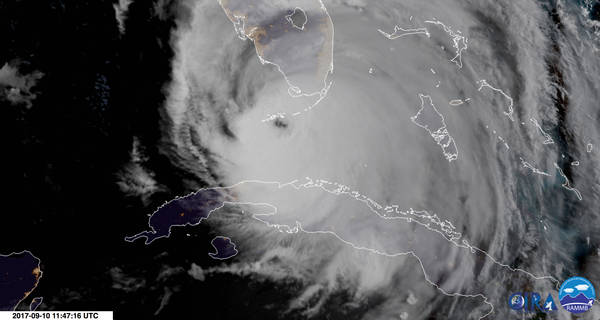 Other recent destructive storms were record-breakers. Hurricane Katrina in 2005 produced the largest storm surge ever observed in the United States after making landfall near New Orleans. Hurricane Sandy in 2012 had the largest diameter of any Atlantic hurricane before slamming into the Northeast.

Indeed, Trump's declaration about the size of past storms relative to Irma, at least, contradict what he tweeted while that hurricane bore down last week on Florida when he called Irma a storm “of epic proportions, perhaps bigger than we have ever seen:"

But the occurrence alone of those superlative storms — either in 1935 or 2017 — does not answer the question of what effect the rising atmospheric and ocean temperatures have on hurricanes.

Over the past century, the Atlantic has oscillated between busy and quiet stretches. After a series of destructive storms in the 1930s, 1940s and 1950s, Atlantic hurricane activity simmered down during the 1970s and 1980s before picking back up again after 1995, after which the Atlantic has been mostly busy.

“The President may have been referring to the fact that the 1930s-1950s were an unusually active phase for hurricane activity in the Atlantic, perhaps comparable to the one we are in now," Gabriel Vecchi, a hurricane researcher at Princeton, wrote in an email. "That is true, though we can't say with confidence, based on my read of the evidence, that the present phase is more or less active than the one in the 1930-1950s."

It's that lull in the 1970s and 1980s that has puzzled scientists, who point to as possible explanations natural shifts in large-scale ocean currents or the cooling effect of pollution in the air before the United States passed stringent environmental laws in the 1970s.

When it comes to the connection between these storms and the warming effect of the buildup of greenhouse gases in the air, scientists say the right question is not whether climate change causes a specific storm. The better question is whether climate-related factors can make hurricanes such as Harvey or Irma worse.

“I don't see hurricanes as necessarily the best piece of evidence to see that global warming is real,” Vecchi said in his email. “The fact that the planet has been warming: surface, ocean, land, deep ocean; that ice and snow have been melting; and that sea level has been rising are much more compelling and unambiguous.”