TWIN MEGASTORMS HAVE SCIENTISTS FEARING THIS MAY BE THE NEW NORMAL... 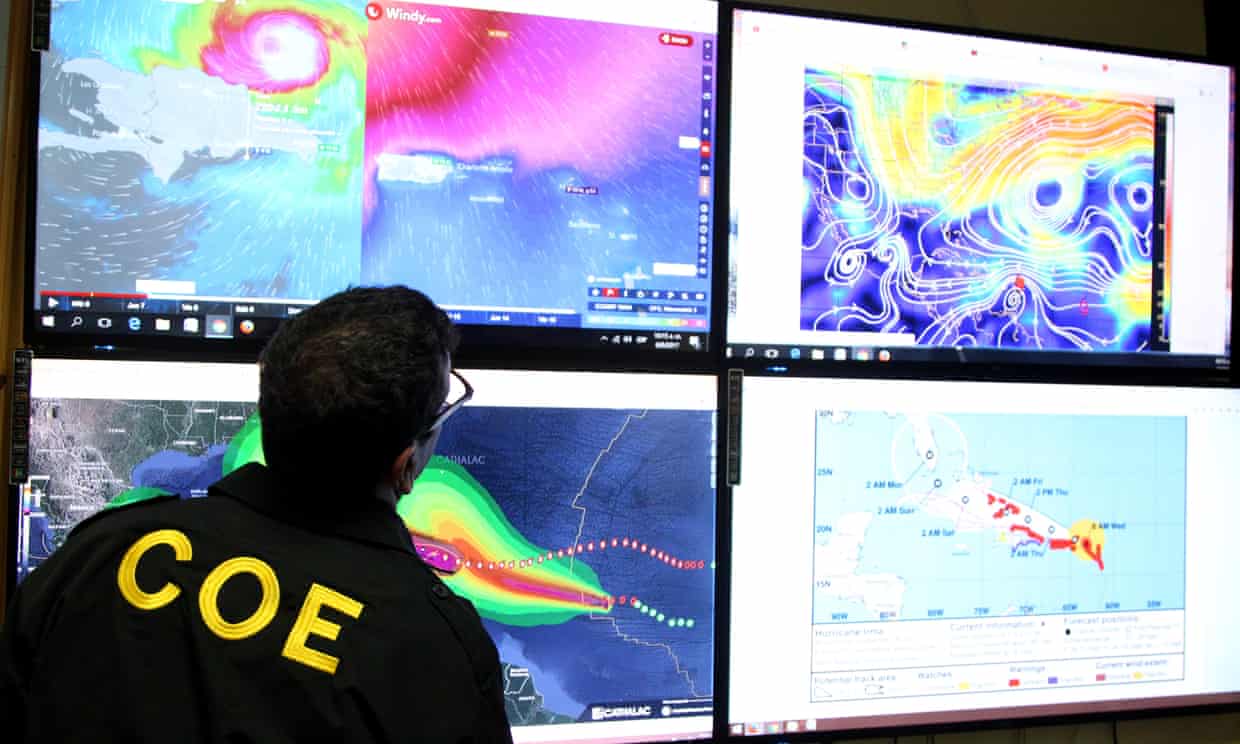 Destructive force of Irma and Harvey has Trump expressing awe, but those in power should focus on the environmental causes

One week after the record deluge in Texas, the biggest hurricane ever measured in the mid-Atlantic is tearing through the Caribbean.

Hurricane Irma, a category-five storm, is destroying homes and threatening lives in the Leeward Islands with 185mph winds and 11ft coastal surges, and in the coming days it is forecast to hit Puerto Rico, Haiti, Dominican Republic, Cuba and Florida. The governor of Florida has already declared a state of emergency.

For Donald Trump, these twin megastorms are a source of awe. “Hurricane looks like largest ever recorded in the Atlantic!” he tweeted of Irma on Wednesday. “Even experts have said they’ve never seen one like this!” he posted of Harvey last week.

But for many scientists they are a worrying sign of a “new normal” in which extreme weather events become more intense as a result of manmade climate change. Rather than expressing astonishment, they say policymakers need to strengthen long-term countermeasures and act more effectively on reducing carbon emissions.

Hurricane looks like largest ever recorded in the Atlantic!

“Even I as a climate scientist am startled to see another potentially devastating storm in this region so shortly after Harvey,” said Anders Levermann, of the Potsdam Institute for Climate Impact Research. “Unfortunately, the physics are very clear: hurricanes get their destructive energy from ocean heat, and currently water surface temperatures in this region are very high.”

Climatologists are careful to point out that rising greenhouse gas emissions are not the sole cause of hurricanes, which buffet the Caribbean and the Gulf of Mexico around this time every year. But there is strong evidence that warming temperatures and rising sea levels are increasing the destructive power of storms.

On Saint Barthélemy, Irma’s winds were measured at more than 150mph before they destroyed monitoring equipment in the island’s meteorological station. The US National Hurricane Center has said the “potentially catastrophic” storm could bring surges of up to 20ft along coasts in the southern Bahamas and Turks and Caicos Islands, and between five and 12 inches of rain in Puerto Rico, Dominican Republic, Haiti and Cuba.

Whether Irma will reach Florida at its current level of intensity is uncertain. Since records began in 1851, only three category five hurricanes have made landfall in the US.

Following Harvey, which was a category four hurricane at its peak, a second major storm of this size in one season would be unprecedented, according to Weather Underground.

Caribbean islands suffer huge damage after Irma – as it happened

Most powerful hurricane ever recorded over the Atlantic Ocean batters Barbuda, St Martin and Puerto Rico as it moves west with category 5 winds and rains. Read more...

But historically unusual weather is no longer freakish. The floods that hit Houston last week were described as a once-in-500-years event because records suggested there was only a 0.2% chance of such heavy rainfall. However, precedent is an increasingly unreliable guide in a changing climate. In the past three years, Texas has been hit by three 100- to 500-year events, according to local media.

More could follow. The National Hurricane Center said on Wednesday it expected Tropical Storm Jose, which has formed east of the Antilles, to become a hurricane during the night. Its latest map also shows a third, smaller storm – Katia – in the Gulf of Mexico.

The degree to which climate change affects the intensity of these weather events is being studied. But there is a growing sense of urgency for governments to reduce emissions and strengthen preparations for future disasters.

“These events offer wider lessons on how prepared we are for a warmer future. It is likely that rainfall events, in general, will become more extreme, as will heatwaves and droughts. So events like Irma and Harvey also help us understand if we are prepared for them and who will be most affected,” said Dann Mitchell, a research fellow at the University of Bristol’s Cabot Institute.

As well as better urban and emergency planning, he said, social policies would also play a part.

“Increasingly, the evidence is clear that the poorest, being the most exposed to many climate risks and often being the least protected, will be most affected. Addressing this inequality is at the heart of not just the climate change discussion but all discussions about how we become resilient to risk and hazards.”