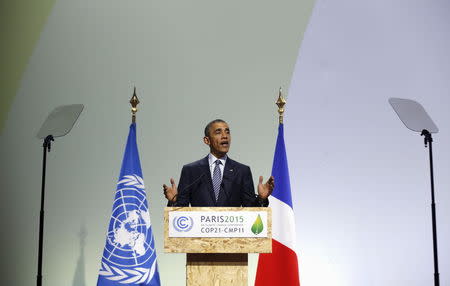 U.S. President Barack Obama speaks at the COP21 session of statements by heads of state and government at the climate summit in Paris, France November 30, 2015. REUTERS/Kevin Lamarque

But the poll, conducted between Nov. 18 and Nov. 22, showed Americans were divided on what domestic measures the United States should take to curb greenhouse gas emissions.

The poll showed 63 percent of Americans favored regulations to cut carbon emissions from power plants, while 31 percent opposed them.

The public was split on whether the United States should restrict drilling for oil and gas on public lands, with 49 percent in favor and 45 percent opposed.

Far fewer of those polled supported any new taxes on electricity or gasoline use.

The show of public support comes as the United States tries to play a leadership role in securing a global climate agreement in Paris over the next two weeks of negotiations.