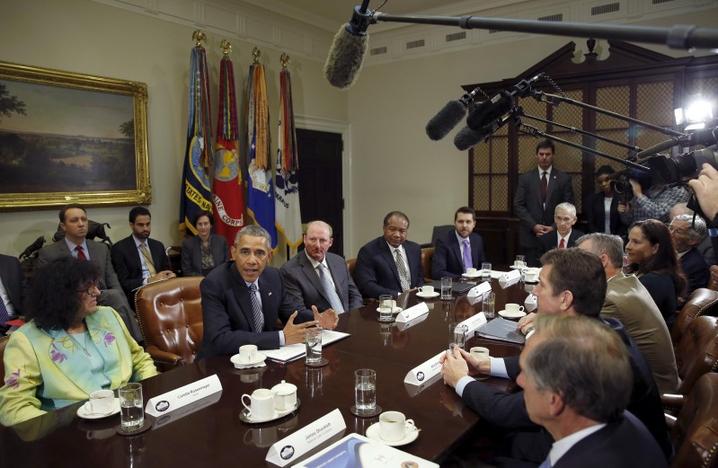 U.S. President Barack Obama hosts a roundtable with CEOs to discuss efforts to tackle climate change both in the United States as well as on a global scale at the White House in Washington, DC, U.S. on October 19, 2015. REUTERS/Kevin Lamarque

U.S. companies that have expressed the most fervent public support for President Barack Obama’s environmental agenda are also funding its biggest enemies - the scores of U.S. lawmakers who are climate change skeptics and oppose regulation to combat it, according to a Reuters review of public records...

Ahead of the Nov. 8 presidential and congressional elections, the donations from companies including PepsiCo, Dupont, and Google reveal a disconnect between how these companies present themselves to the public on environmental issues, and how they manage their political contributions to support business-friendly policy.

Many companies active in U.S. politics spread their political donations broadly on both sides of the aisle and consider multiple issues when deciding whom to support.

But inconsistency between a company's environmental positions and its political giving may point up a need for better oversight, according to Jon Lukomnik, head of the Investor Responsibility Research Center Institute.

"There really needs to be a process that looks at these issues ... at C-suite and board levels on a periodic basis," Lukomnik said.

The Reuters review covered donations made during the 2016 election cycle by the political action committees (PACs) of 30 of the biggest publicly traded U.S. companies that signed Obama’s “American Business Act on Climate Change Pledge” in 2015, a public promise to enact climate-friendly corporate policies and support strong climate change oversight like the global climate accord signed in Paris.

The review found that 25 of the 30 companies are funding the campaigns of lawmakers featured on a "climate deniers" list that was put together by Organizing For Action, a non-profit created by former Obama campaign aides to advocate his agenda.

The list includes more than 130 members of Congress, nearly all Republicans, and is a who's who of the biggest opponents of Obama's plan to combat climate change. Some of those on the list dispute the label "denier" and describe themselves as climate change "skeptics".

The list includes Republican Congressman Kevin Cramer of North Dakota, an energy advisor to presidential candidate Donald Trump who once argued the Earth was cooling not warming, and Republican U.S. Senator Jim Inhofe of Oklahoma, who last year held up a snowball on the Senate floor as evidence global warming does not exist.

Other signatories to the American Business Act on Climate Change Pledge that gave more than a third of their top political contributions to lawmakers on the list include Google, AT&T, GE, Verizon, and Mondelez, according to the review.

Those levels of donations given to climate skeptics are relatively high given that the list covers about a quarter of U.S. Congress members.

Officials from PepsiCo, Google, AT&T, and Verizon did not respond to requests for comment. DuPont declined to comment, and Mondelez referred Reuters to the press release announcing its participation in the climate pledge.

A GE spokeswoman said the company supports "elected officials based on a wide range of issues, but we have consistently been outspoken about the need to address climate change and have invested over $17 billion in cleaner technology R&D over the last 11 years.”

PepsiCo has also been working to become more energy efficient, and now operates the country's largest fleet of electric delivery trucks. But it still has a sizeable carbon footprint: It produced some 4.1 million metric tons of carbon dioxide equivalents in 2013, down 2 percent from 2012, according to its website. A more recent figure was not available.

Congressman Cramer, a self-described climate skeptic who opposes Obama's climate agenda but has taken donations from companies that signed the climate pledge, said companies tend to consider issues like tax policy, national security, and regulatory policy when picking who to support - as opposed to a single issue like the environment.

He, like other lawmakers featured on the Organizing For Action "climate deniers" list, said the debate over climate change was not as clear cut as Obama's allies depict it.

"It is not a black and white issue, like if you agree with Obama you're enlightened, and if you don't you're in the dark," he said. "It is more of a spectrum."

A spokeswoman for Senator Chuck Grassley of Iowa, another lawmaker featured on the list, said he had "done more than almost any other member of Congress to increase the use of clean energy" sources like wind and biofuels.

But she added he was opposed to Obama's climate change initiatives, like the Clean Power Plan to curb carbon output, because he felt that it could hurt the competitiveness of U.S. businesses globally.

Senator Inhofe, who said he doesn’t mind the label “climate denier”, suggested that some companies had signed the American Business Act on Climate Change pledge for superficial reasons.

"These are competitive companies, and the board might have said ‘Look, right now it might be a popular thing to join this, and there’s no downside since we’re not really committing to anything.’ That absolutely goes on," he said.

The five companies reviewed by Reuters that did not fund opponents to Obama's climate change agenda either had no political action committee, like Apple, or made only a small number of contributions, like Coca Cola.

"No company should want to be perceived as espousing progressive climate policies on the one hand, while funding climate deniers on the other," she said.