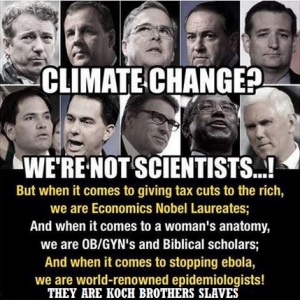 U.S. Senate Republicans on Wednesday said Congress would not approve the Obama administration's $500 million request for its first payment into a United Nations climate fund, a move they said would undermine the upcoming climate change summit in Paris.

"This president is going to go (to Paris) with no money," said Republican Senator Shelley Moore Capito of West Virginia, who chaired a hearing in the Senate environment panel on the international climate negotiations, which begin on Nov. 30.

Capito and other Republican members of the committee said they will ensure any deal the U.S. strikes in Paris will face congressional scrutiny, and warned they will block President Barack Obama's 2016 budget request for the first tranche of the $3 billion pledged last year to the U.N. Green Climate Fund.

"Without Senate approval (of a climate agreement), there will be no money," added Senator John Barrasso of Wyoming, acknowledging that guarantees of climate aid to developing countries is "the linchpin" of the Paris climate conference.

Administration officials have said the U.S. contribution to a global climate agreement would not require Senate approval.

The fund is seen as a down payment by rich countries toward a longer-term climate finance package that would total $100 billion a year by 2020, an amount that developing nations say is a condition for them to sign onto any deal in Paris.

That money would be used by developing countries to help them adapt to climate change impacts, such as sea-level rise and water scarcity, and adopt cleaner energy technologies.

Other Republican senators on the panel called the GCF a "slush fund" for developing countries, and said U.S. aid is better directed to combating malaria or malnutrition.

One hearing witness said helping the world's most vulnerable countries build their resilience to climate impacts could help prevent countries from spiraling into conflicts over resources.

"International climate change investments can help counter security threats that otherwise would have to be confronted with more costly interventions," said David Waskow of the World Resources Institute in his testimony.

National security and military experts have drawn connections between climate change and insecurity. Some have tied Syria's unrest partially to its 2006-2011 drought and crop failures.

Democratic Senator Cory Booker of New Jersey said other countries are seeking U.S. leadership on climate change the way they do in the global fight against terrorism.

"In the face of global crisis ... America must lead," he said.