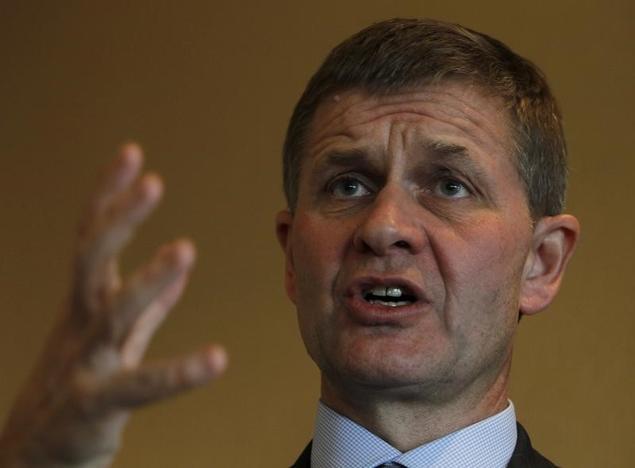 FILE PHOTO: Erik Solheim speaks during an interview in Jakarta October 25, 2010. REUTERS/Crack Palinggi
GENEVA -- The United States will shoot itself in the foot if it quits the Paris climate accord because China, India and Europe will snap up the best power sector jobs in future, U.N. Environment chief Erik Solheim said on Thursday...

U.S. President Donald Trump is expected to announce as early as next week whether he will take the United States out of the climate pact, having vowed during his campaign to "cancel the Paris Climate Agreement" within 100 days of becoming president.

"There is no doubt where the future is and that is what all the private sector companies have understood," Solheim told Reuters in Geneva. "The future is green," he said.

"Obviously if you are not a party to the Paris agreement, you will lose out. And the main losers of course will be the people of the United States itself because all the interesting, fascinating new green jobs would go to China and to the other parts of the world that are investing heavily in this."

The world has now passed its "peak oil" stage, the Norwegian-born Solheim said, and was rapidly moving into the age of solar and wind.

The Paris accord, agreed by nearly 200 countries in 2015, seeks to limit planetary warming by cutting emissions of carbon dioxide and other gases from burning fossil fuels.

"Wind engineer is now probably the most promising job opportunity in the United States," Solheim said, adding that China and India were bringing the price of solar down so fast that coal was no longer competitive.

Solheim's new target is pollution, with plastic in the oceans expected to equal the weight of fish by 2050. But with science, mobilised citizens, regulated markets, and the enormous power of business, such huge problems could be solved, he said.

The green revolution is being led by iconic firms such as Google, Walmart, Microsoft, Apple and Facebook, so the momentum does not depend on Washington, Solheim said.

"Even if the worst were to happen and the United States were to withdraw, the consequences would be much less than people think," he said.

Political leadership would shift to the European Union, China and India, and the U.N. is already talking to them about meeting the funding gap if the United States steps back - not only from the climate deal but U.N. funding in general.

"We definitely want to ask the Senate and the U.S. Congress to keep as much of the U.S. contribution as possible to the U.N. and to the climate work. If they drastically reduce we would for sure ask others to step up and provide more money," he said.

However the U.N. also needed to be more efficient.

"It’s not all that bad that there is some scrutiny. We are happy to work with the Trump administration on how to make the United Nations more efficient," Solheim said.

"And if they cut down, which we encourage them not to do, we will also rationalize."