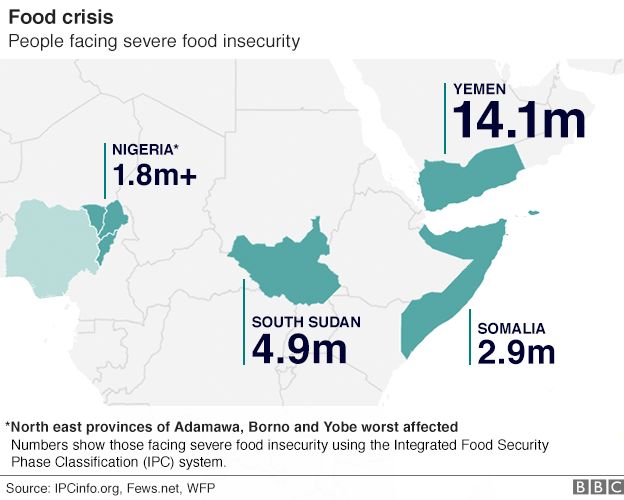 The world is facing its largest humanitarian crisis since 1945, the United Nations says, issuing a plea for help to avoid "a catastrophe"...

Yemen's war is leaving children on the brink of famine. Warning: This video contains some distressing scenes

Unicef has already warned 1.4m children could starve to death this year.

"We stand at a critical point in history," Mr O'Brien told the Security Council on Friday. "Already at the beginning of the year we are facing the largest humanitarian crisis since the creation of the United Nations."

"Now, more than 20 million people across four countries face starvation and famine. Without collective and coordinated global efforts, people will simply starve to death. Many more will suffer and die from disease.

"Children stunted and out of school. Livelihoods, futures and hope will be lost. Communities' resilience rapidly wilting away. Development gains reversed. Many will be displaced and will continue to move in search for survival, creating ever more instability across entire regions."

Like Mr O'Brien, he urged more financial support for the four countries. But why are they in such dire need? 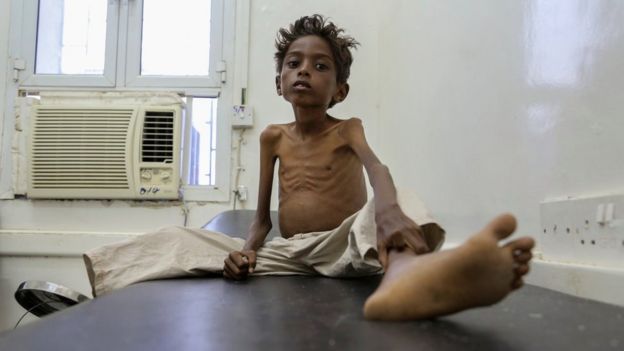 The pictures were among the most shocking of last year: emaciated children, clinging on to life with what little strength they had left. Four-year-olds not bigger than infants. And mothers unable to do anything to stop their children dying.

It is thought a child dies every 10 minutes in Yemen from a preventable disease, while half-a-million children under five are suffering from severe acute malnutrition.

The UN estimates some 19 million people - or two thirds of Yemen's population - is in need of some sort of humanitarian help following two years of war between Houthi insurgents and the government, which is backed by a Saudi-led coalition.

A naval embargo imposed by the Saudi-led coalition, fighting around the government-controlled port of Aden and air strikes on the rebel-held port of Hudaydah, have severely reduced imports since 2015.

A lack of fuel, coupled with insecurity and damage to markets and roads, have also prevented supplies from being distributed.

A famine has been declared in parts of South Sudan, the first to be announced in any part of the world in six years. The government and the United Nations report that some 100,000 people are facing starvation, with a million more on the brink of famine. A combination of civil war and an economic collapse have been blamed. There have been warnings of famine in Yemen, Somalia and north-eastern Nigeria, but South Sudan is the first to declare one.

UN agencies say 100,000 people are facing starvation in South Sudan, while a further million are classified as being on the brink of famine.

It is the most acute of the present food emergencies, and the most widespread nationally.

Overall, says the UN, 4.9 million people - or 40% of South Sudan's population - are "in need of urgent food, agriculture and nutrition assistance".

Continuing fighting in the country that now has been at war since 2013, lack of rule of law, under-development.

Some UN officials have suggested President Salva Kiir's government has been blocking food aid to certain areas - a claim denied by the authorities.

There have also been reports of humanitarian convoys and warehouses coming under attack or being looted, either by government or rebel forces.

Read more: Why are there still famines?

Starvation could kill more people than Boko Haram...Nigeria has been hit by the biggest humanitarian crisis in Africa, with the UN warning that some 100,000 people, mostly children, could die of starvation in the north-east unless they receive urgent aid. The extent of the crisis has become clearer as the army regains territory from militant Islamist group Boko Haram, which launched an insurgency in 2009 to establish Islamic rule in the region.

The UN has described the unfolding disaster in north-eastern Nigeria as the "greatest crisis on the continent" - the full extent of which has only been revealed as extremist militant group Boko Haram is pushed back.

It was already known the Islamist group had killed 15,000 and pushed more than two million from their homes. But as they retreated, it became clear there were thousands more people living in famine-like conditions in urgent need of help.

The UN estimated in December there were 75,000 children at risk of starving to death. Another 7.1 million people in Nigeria and the neighbouring Lake Chad area are considered "severely food insecure".

There are still areas under the control of Boko Haram, which aid agencies cannot reach.

Thee have also been allegations of widespread aid theft, which are being investigated by Nigeria's senate.

Hospitals are seeing children with severe dehydration...Somalia has not had enough rain for three years. The country's landscape has become littered with dead animals and there are warnings of a full-blown famine by June.

The last time a famine was declared in Somalia - just six years ago - nearly 260,000 people died.

At the beginning of March, there were reports of 110 people dying in just one region in a 48-hour period.

Humanitarian groups fear this could be just the beginning: a lack of water - blamed partially on the El Nino weather phenomenon - has killed off livestock and crops, leaving 6.2 million people in urgent need of help.

Piracy off Somalia's coast impeded shipments in the past - however attacks have reduced significantly in recent years.

Read more: More than 100 die from hunger in one region