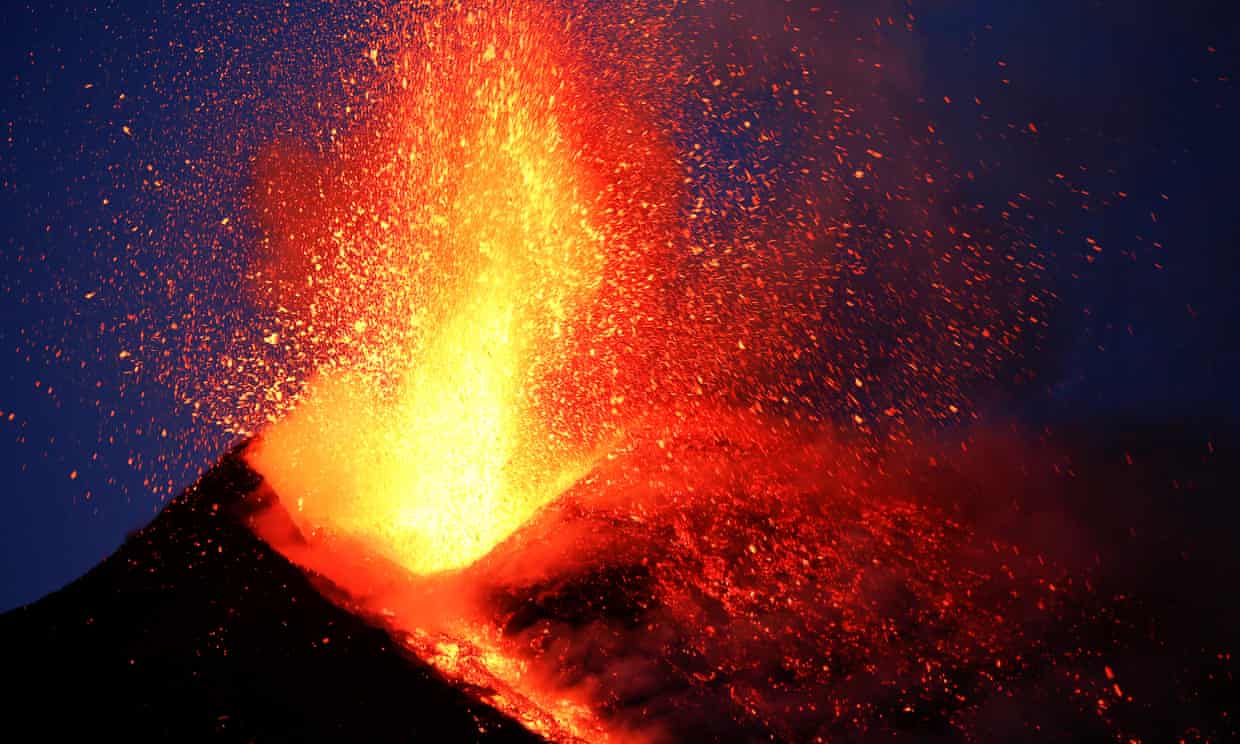 There are parallels between today’s and past greenhouse gas-driven climate changes...

Coincidence doesn’t prove causality, as they say, but when the same two things happen together over and over again through the vast span of geological time, there must be a causal link. Of some 18 major and minor mass extinctions since the dawn of complex life, most happened at the same time as a rare, epic volcanic phenomenon called a Large Igneous Province (LIP). Many of those extinctions were also accompanied by abrupt climate warming, expansion of ocean dead zones and acidification, like today.

Earth’s most severe mass extinction, the “Great Dying,” began 251.94 million years ago at the end of the Permian period, with the loss of more than 90% of marine species. Precise rock dates published in 2014 and 2015 proved that the extinction coincided with the Siberian Traps LIP, an epic outpouring of lava and intrusions of underground magma covering an area of northern Asia the size of Europe.

But those rock dates presented science with a new puzzle: why was the mass extinction event much shorter than the eruptions? And why did the extinction happen some 300,000 years after the lava began to flow?

Now in a new study published in Nature Communications, Seth Burgess of the US Geological Survey, along with James Muirhead of Syracuse University and Samuel Bowring of MIT, think they have the answer. As Burgess told me:

It’s clearly not the entirety of the LIP that’s guilty. There’s a subinterval that’s doing the work, and I set out to figure out which subinterval that was, and what makes it special.

Burgess noticed that the beginning of the mass extinction, as well as a jolt to the carbon cycle and abrupt climate warming, coincided exactly with a switch in the style of volcanic activity in the Siberian Traps. During the initial 300,000 years of the eruptions, basalt lava poured over a vast area of Siberia building to several kilometers thick. In this time there was some stress to life in the Northern Hemisphere, but no mass extinction. Life only began to disappear across the globe at exactly the same time that lava stopped erupting above ground, and instead began to inject as sheets of magma underground.

In Siberia you have got the Tunguska Basin which is a thick package of sediments that contain carbon-bearing rocks like limestone and coal. When you start intruding magma, [it] cooks those sediments and liberates the volatiles. So the deadly interval of magma in the entire Large Igneous Province is the first material to intrude and pond into the shallow crust

In other words, it wasn’t the lava, it was the underground magma that started the killing, by releasing greenhouse gases.

The diatremes that have been mapped are the geologic representation of that gas escape on a catastrophic level. Our hypothesis is that the first sills to be intruded are the ones that really do the killing [by] large scale gas escape likely via these diatremes.

Svensen, who was not involved in Burgess’ study, commented:

The Burgess et al paper is a crucial step towards a new understanding of the role of volcanism in driving extinctions. It’s not the spectacular volcanic eruptions that we should pay attention too - it’s their quiet relative, the sub-volcanic network of intrusions, that did the job. The new study shows convincingly that we are on the right track.

Greenhouse gas as a killer

While other scientists have proposed that an array of killers may have been involved in the end-Permian mass extinction, from mercury poisoning to ultraviolet rays and ozone collapse to acid rain, Burgess argues that it was principally greenhouse gas emissions triggered by magma intrusions that caused the extinction through abrupt global warming and ocean acidification. I asked him to outline the evidence for that.

There are 3 primary lines of evidence that support that link. The first is: right before the onset of the mass extinction we have evidence for a massive input of isotopically light carbon into the marine system.

He went on to explain various lines of evidence that point to the source of that carbon being methane and carbon dioxide resulting from magma intruding and cooking organic-rich sediments. He continued:

Just prior to extinction and persisting after the mass extinction the sea surface temperature is thought to have gone up about 10°C. You get that increase by pumping greenhouse gas into the atmosphere. So that’s the second.

That’s not to say that other factors had no role in ruining the environment:

There is a cacophony of kill mechanisms, and I think that this first pulse of sills is the trigger for quite a few of those, sitting at the top, and beneath it are a cascade of negative effects from ocean acidification to climate warming and on down the line.

A series of associated events

Coincidentally, Joshua Davies of the University of Geneva and colleagues have just narrowed down the trigger for the end-Triassic mass extinction, another of Earth’s biggest mass extinctions, to the underground phase of its associated Large Igneous Province. The Central Atlantic Magmatic Province (CAMP) is another enormous igneous province which stretches from Maine to South America, and includes the Palisade Sill visible from Manhattan.

They too used high precision rock dates on a vast sill that intruded organic rich sediments in the Amazon Basin, and found that this underground magma intrusion also coincided with the extinction. Like Burgess, Davies also argues that greenhouse gas baked from sediments drove climate change, which drove the mass extinction in a smaller repeat of the end-Permian events, this time 201.5 million years ago.

“I think CAMP is very similar to the Siberian Traps and that’s the reason why there’s an extinction at that time. I’m not surprised that they got similar results,” said Burgess.

Diatreme pipes from magma intrusions have also been identified as a likely cause for a more recent global warming and very minor extinction event – the Paleocene–Eocene Thermal Maximum (PETM) 56 million years ago. Again, prodigious quantities of greenhouse gases erupted from oil-rich deposits, although in that case it’s been hard to locate and date the “smoking gun” intrusions due to the fact that they are under the Atlantic Ocean.

Only Large Igneous Provinces characterized by sills intruded into a volatile-fertile basin are going to be lethal on a global scale.

This may explain why some Large Igneous Provinces are tied to mass extinctions, and some are not. Burgess thinks that the Deccan LIP, which happened at the time when the dinosaurs disappeared at the end of the Cretaceous, would not have triggered a major mass extinction on its own:

The Deccan Traps doesn’t satisfy those 2 criteria. It’s predominantly flood basalt lavas erupted onto old granitic rock. Acting alone there would likely have been negative effects on the biosphere because of the gases and the particulate matter released by those lavas, which are not insignificant, but I would argue that acting alone it would have been minor relative to the observed mass extinction. But with the Chicxulub impactor sharing the causal burden together they caused the mass extinction at the end of the Cretaceous.

The more science learns of these past greenhouse gas-driven events, the more uncomfortable the parallels to today become. I asked Burgess if it was ridiculous to make the comparison.

Geologically fast build-up of greenhouse gas linked to warming, rising sea-levels, widespread oxygen-starved ocean dead zones and ocean acidification are fairly consistent across the mass extinction events, and those same symptoms are happening today as a result of human-driven climate change. Even though the duration of those past events was longer, and the volume of emissions was larger than we will produce, we are emitting greenhouse gases around 10 times faster than the most recent, mildest example – the PETM. The rapidity of today’s emissions prompted scientists Richard Zeebe and James Zachos to observe in a 2013 paper:

The Anthropocene will more likely resemble the end-Permian and end-Cretaceous disasters, rather than the PETM.

When the promises made for the 2016 Paris Agreement on climate change are added up, they aim to limit peak warming this century to about 3.3ºC compared to about 4.2ºC for the business-as-usual scenario, and the 2ºC limit the world is aiming to stay under. It’s sobering to compare those numbers to the majority of mass extinctions in the geological record which were characterized by abrupt warmings typically around 6-7ºC.

Howard Lee is a geologist and science writer who focuses on past climate changes.