US GOVERNMENT CLIMATE REPORT LOOKS AT HOW THE OCEANS ARE BUFFERING CLIMATE CHANGE... 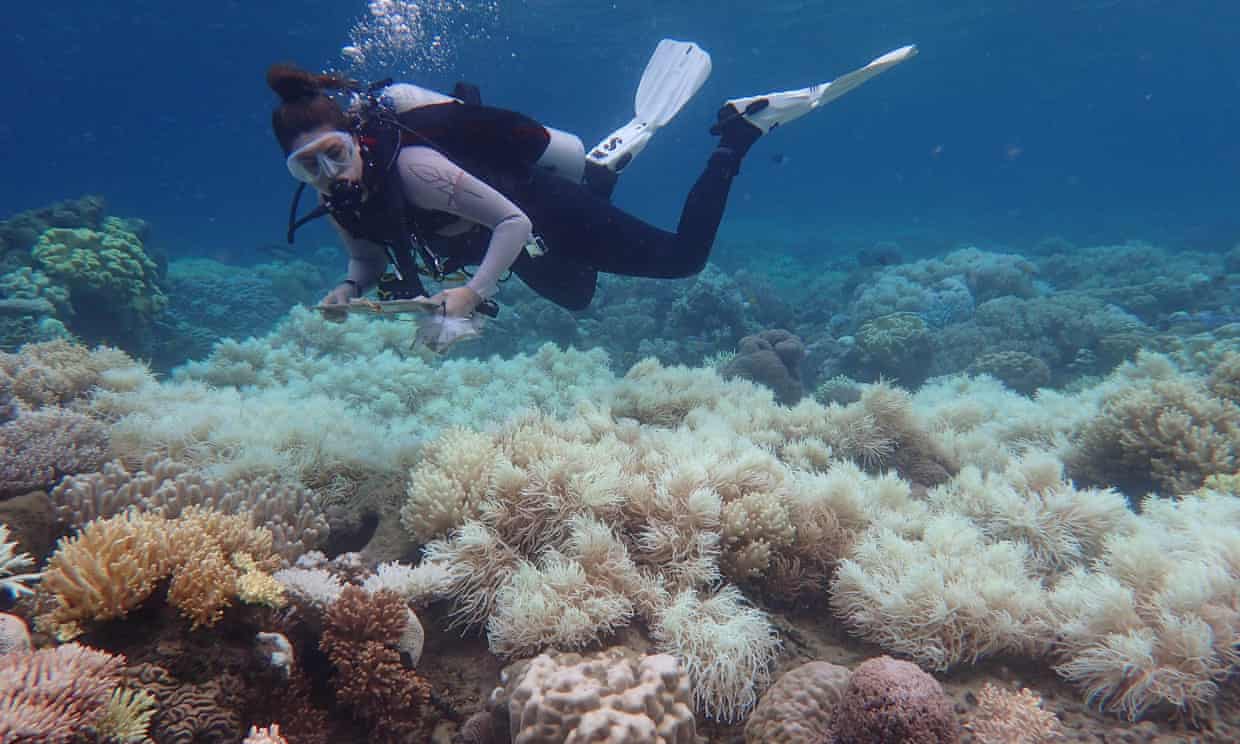 A key chapter of the US Global Change Research Program Report deals with how the oceans are being impacted by human carbon pollution...

In the recently released US Global Change Research Program Report, one of the chapters I was most interested in was about the changes we’ve observed in the world’s oceans. The oceans are really the key to the climate change issue, whether that be in quantifying how fast it’s happening or how much will happen in the future. As humans emit greenhouse gases (particularly carbon dioxide), we see some major changes that cannot be explained naturally.

The oceans are important because they act as a buffer; that is, they absorb much of the effects of greenhouse gases. In fact, the oceans absorb a lot of human carbon pollution. This is a big help for us because without the oceans, the climate would change much faster.

But in a certain way, the oceans are hurting us too. Since the oceans absorb so much of our carbon pollution and the resulting heat (93% of the extra heat), they turn a short-term problem into a long-term problem. Just like a fly wheel can be used to store rotating energy in a machine, the oceans store heat energy and chemical energy that can later manifest itself. The oceans also impact our psychology. The pollution we emit today will have effects for many years (partly because of the oceans). We cannot just stop emitting pollution and think this problem will immediately go away. We have to plan ahead. And, importantly, we have to stop emitting before most of the effects are evident.

I like to think of the Earth’s climate like a heavy train. A train cannot stop quickly; the brakes have to be applied far ahead of an obstacle. The ocean is our “climate train.”

Okay with that, what did this new report show? There were four key findings the authors cited. First, as I mentioned, they report that the oceans are absorbing almost all the heat from greenhouse gases. Over the past six decades, the amount of heat at all levels of the ocean has increased. This heating will continue into the future with approximately 5°F warming by the year 2100. This may not sound like much, but it is really enormous heating for water. When oceans warm, sea levels rise (warming water expands). Warm water also evaporates much faster to the air so that the atmosphere becomes more humid, resulting in more heavy rainfalls and flooding.

The figure below shows the changes in ocean heat (OHC) measured in Joules (a unit of energy). 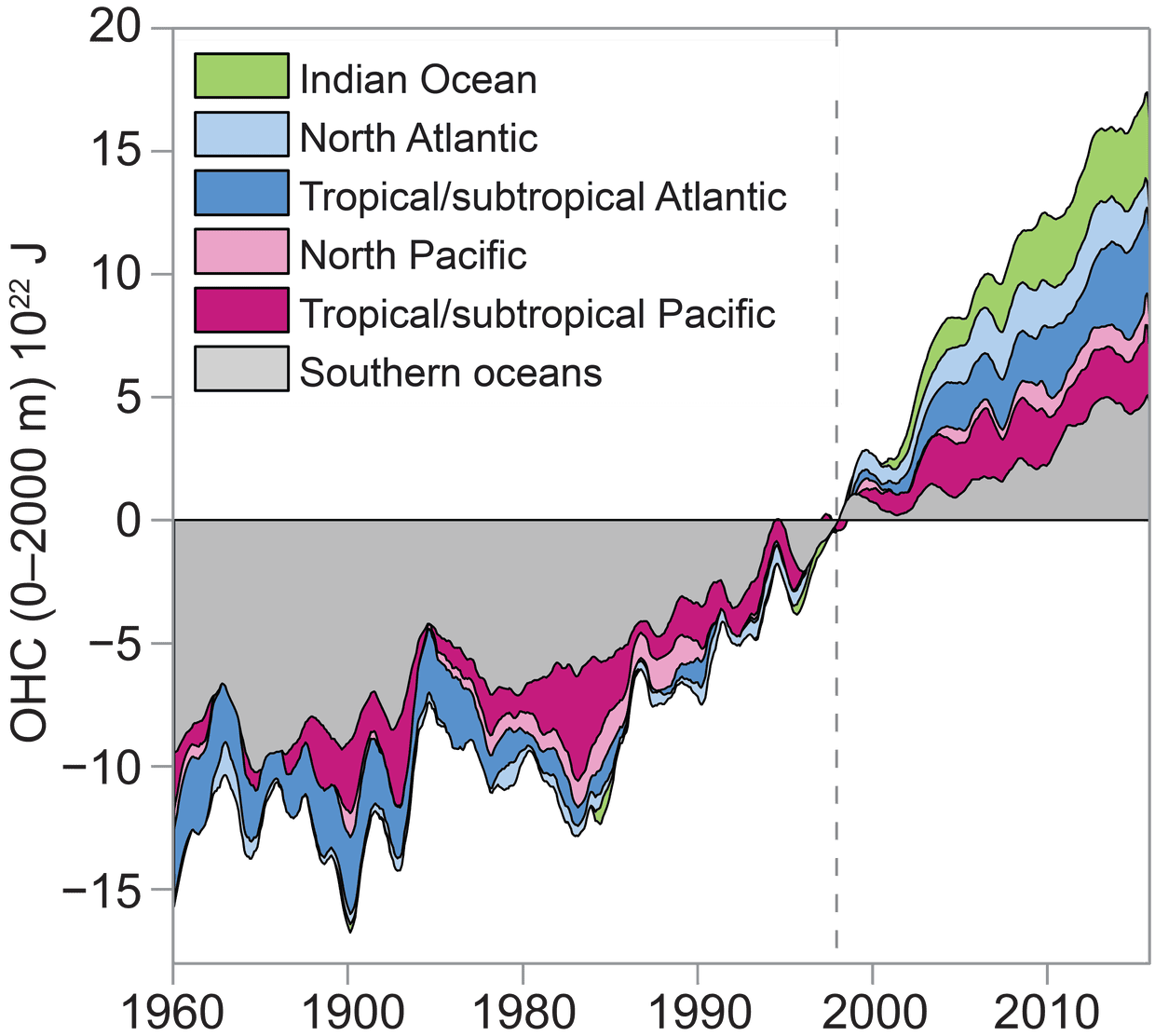 A second conclusion is that the heat may lead to major changes in the ocean currents. There is a really important flow of ocean waters called the Atlantic Meridional Overturning Circulation. It is a stream of water that passes from the warm tropics up toward Europe. Then the water gets cold and dense, sinks, and flows back towards the equator. This current is responsible for the warm wet weather in England, for example (compared with other locations with the same latitude). The report discusses a potential weakening of this current. If the current were to weaken (or stop altogether), there would be major effects to the weather in Europe and North America.

A third conclusion from the report is that the oceans are absorbing a lot of the human carbon pollution. For instance, the oceans currently absorb more than one-quarter of carbon from burning fossil fuels. One consequence of this is the oceans are becoming more acidic. The carbon dioxide is changing the ocean chemistry.

The simple way to think about this is to consider a soda. If you shake a soda and then open the soda, it will fuzz and bubble. This happens because sodas are carbonated beverages. When a soda fizzes, the carbon dioxide is leaving the liquid. What we are doing to the oceans is the reverse process. We are putting carbon dioxide into the ocean waters. Through various chemical processes, it makes the oceans more acidic and that matters for animals that make shells. For many of these animals – particularly those at the base of the food chain – acidic waters can dissolve shells or make them hard to form in the first place. This really matters because if the food chain collapses, then marine ecosystems and human society suffer.

A final main conclusion is the observed decrease in the amount of oxygen in the ocean waters. Especially near the coasts, there are fewer oxygen atoms absorbed in the waters. The decrease will continue and we may see as much as 3.5% decrease in oxygen.

The report is freely available, and the chapters clearly separate out different topics. I encourage people to download and rely upon this resource which presents an up-to-date understanding of climate change.