US TRIBES WORK WITH SCIENTISTS AGAINST CLIMATE CHANGE... 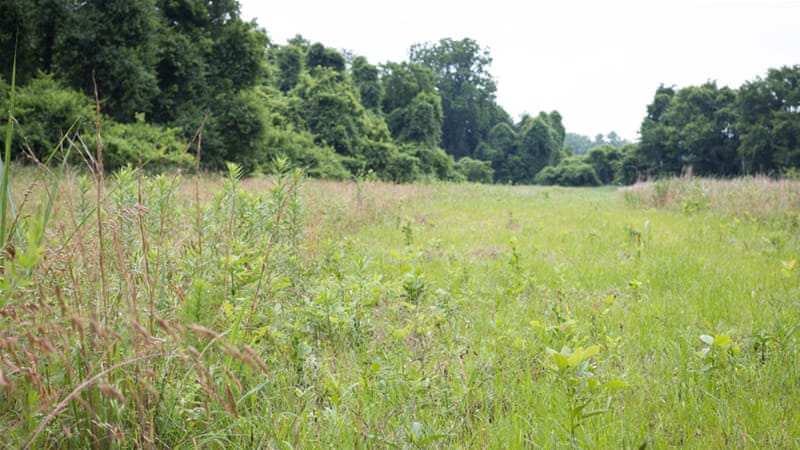 'Climate change brings uncertainty, so we try to adapt to that uncertainty,' says Tye Baker, director of Water Resources for the Choctaw Tribe of Oklahoma [Nicholas Linn/Al Jazeera]

Oklahoma, United States - The last five years have been tough on Tye Baker, the director of Water Resources for the Choctaw Tribe of Oklahoma.

First, there was the drought: frighteningly little precipitation from the end of 2010 until the spring of 2015. Then there was heat: 35 straight days of temperatures above 37 degrees Celcius in 2011. Then came the flooding: torrents of rain, 30cm at a time, during the summer of 2015.

Through it all, it has been up to Baker to ensure that the Choctaw people have clean, drinkable water in their homes, a task hard enough without the added complication of the erratic weather. But erratic weather is the norm now, a consequence of rising global temperatures, Baker believes.

"Climate change brings uncertainty, so we try to adapt to that uncertainty," Baker adds. "I'm having to deal with what the climate provides me. All I can do is adapt."

Across Oklahoma, there are 37 other tribes also struggling to adapt. And while the weather affects all residents, the Native American nations face unique challenges.

For one, many of them don't own or manage their own water facilities - the state does. In some cases, the state has diverted water from tribal lands towards large cities without asking for the tribes' approval or compensating them for it.

Climate change also threatens the cultural practices of the tribes. It has decimated important species used in traditional craft-making, such as river cane and the freshwater mussel, and it has thrown off traditional growing seasons and accompanying ceremonies.

Established in 2012, the South Central Climate Science Center (SCCSC) has been working with tribes across the south-central US to identify their unique vulnerabilities, help them cope with emergencies and develop long-term adaptation strategies. It's a federally funded research consortium that comprises four state universities across the region and two Native American tribes: the Choctaw and the Chickasaw.

"We try to put together research groups that answer questions about climate in the southern US," says Renee McPherson, the codirector of the centre.

"We especially try to work closely with tribes.There are over 70 in the south-central region and all are being stressed by the climate … We try to help people like [Baker], who are dealing with these questions, to get the answers they need."

McPherson manages several research teams out of the University of Oklahoma who are currently studying everything from the effect of winter weather events on wildlife to the drivers of major weather shifts to seasonal agricultural forecasting.

The centre then works with one of its tribal liaisons to make sure the findings are delivered in useful ways to tribal governments and members. "We try to develop materials that translate science from gobbledygook into guidance documents and instructional videos," McPherson says.

Kim Merryman is one of these tribal liaisons.

"I'm basically a match-maker between the scientists and researchers in the consortium and the tribes," Merryman says.

Above all, her position is relational. Tribes tend to be protective of their resources and wary of outside interference, she says, so relationship building is essential to her work.

"We really work on developing a relationship with the tribe so we can see what they value and what's changing," Merryman says.

"[Then] I identify what their science needs might be and match them to the researchers in the consortium."

Baker says the centre helps him create climate models that allow him to manage his tribe's water resources and plan for the future.

"They provide the temperature data and the precipitation data that we put into our climate models," he says.

Generally, the date points to a pattern of prolonged periods of drought interspersed with intense rainfall. Rather than replenish water supplies, floods tend to increase water runoff and actually leave the system with less usable water in the long-run.

So even though average annual rainfall figures will likely remain fairly constant, as what rain does fall will come in the form of floods, Baker knows he's going to have a reduced water supply overall.

Knowing this allows him to plan ahead.

Currently, the city of Durant, where the Choctaw Nation is headquartered, draws all its water from a single source: the Blue River. During periods of drought, like the one they had previously experienced, the river risks running dry, so Baker's adaptation plan involves digging wells to diversify the city's water sources.

It also involves water recycling plants. Many industries, like manufacturing, can use unpotable water, Baker says. If he can develop the infrastructure to divert recycled waste water to those industries, he can free up a significant amount of drinking water for household taps.

When it comes to long-term planning, Baker and the Choctaw Nation, as members of the SCCSC consortium, are years ahead of most tribes in the south central US.

Among the other tribes, the work is only beginning, Merryman says. The first step is to hold workshops to educate tribal leaders on the basics of climate science and introduce them to the methods of the consortium.

The centre has already held several of these in Oklahoma and is launching into New Mexico.

READ MORE: How farmers can adapt to a warming world

"For many tribes, adding climate change activities seems too challenging at first," Merryman says. "We try to show them how they can integrate climate change adaptations into their existing work plans."

The next step is to train tribal leaders in conducting vulnerability assessments. They recently began conducting training sessions in Durant, Oklahoma, under the leadership of the Choctaw.

At the first workshop, the Choctaw gave a presentation on how they had identified vulnerabilities in their cultural resources.

"The Choctaw gave a presentation on freshwater mussels, how they used them traditionally to make spoons and jewellery, and how the environment of the mussel has been shrinking," Merryman says. "It was really good for tribes there to see this example so that they could assess themselves what their own vulnerabilities might be."

Once tribes have conducted vulnerability assessments, the SCCSC will help them develop adaptation plans and access grants to fund these plans.

This is the stage where Baker currently finds himself: "What the Choctaw Nation needs is money for implementation and infrastructure development," he says.

The SCCSC can help with that - and working closely with tribes will qualify them for federal grants as well.

But perhaps even more valuable than the extra funding in this partnership is the unique and invaluable indigenous knowledge that the tribes share with the organisation.

"I've learned much more from them than I've taught," Merryman says. For example, at a recent workshop in New Mexico, she learned that the Pueblo don't see land or resources as things that can be owned; they were first introduced to this concept when settlers arrived and began allotting land to them.

"This young man from the Sandia Pueblo enlightened me, saying: 'We were put behind a fence and given boundaries, but we have always looked at things holistically. Humans are the invasive species,'" Merryman says.

This comment fundamentally changed her perspective on resource management, she adds.

"If we listen to the people that have a cultural link to the earth, they can share with us the changes they have seen over time," she say. "Even more than that, they have an oral history that lives through storytelling and that is priceless."