US YOUTHS SUES US GOVERNMENT OVER CLIMATE INACTION... 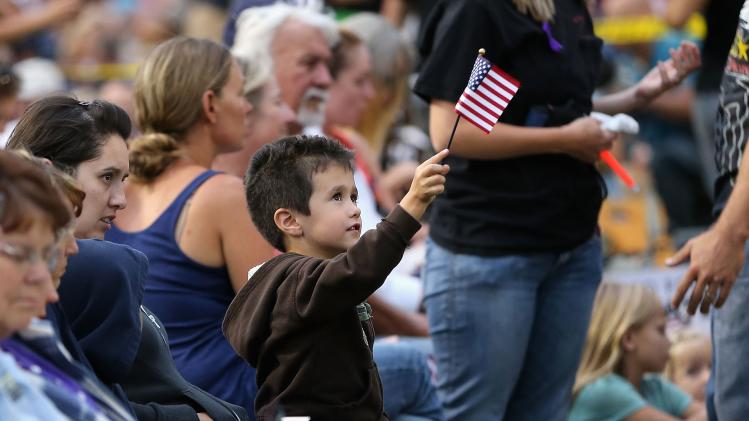 An unprecedented massive legal campaign led by young Americans is playing out in courtrooms across the nation...

Young people across the country are suing several government agencies for failing to develop a climate change recovery plan, conduct that amounts to a violation of their constitutional rights, says their lawyer Julia Olson.

Their futures are at stake, say the young plaintiffs.

“Climate change is the biggest issue of our time,” said 13-year-old Xiuhtezcatl Roske-Martinez, a member of nonprofit Kids vs. Global Warming, a plaintiff in the suit.

“It’s not every day you see young people getting involved politically, but the climate crisis is changing all that. Every generation from here on out is going to be affected by climate change,” added Roske-Martinez, who founded environmental nonprofit Earth Guardians and organized successful actions in his hometown of Boulder, Colorado.

The federal suit, which has made its way to the U.S. Court of Appeals for the D.C. Circuit, is part of a groundbreaking nationwide legal campaign spearheaded by youth and backed by some of the world’s leading climate scientists and legal scholars.

The case, filed by five teenagers and two nonprofits — WildEarth Guardians and Kids vs. Global Warming — representing thousands more youth, relies on the public trust doctrine, which requires government to protect resources essential to the survival of all generations.

“With the United States as the largest historic emitter of carbon dioxide, the atmospheric resource cannot be restored without government action,” Olson told Al Jazeera.

Supported by more than 30 environmental and constitutional professors, the young plaintiffs name six federal agencies in their suit — the Environmental Protection Agency and the Interior, Agriculture, Commerce, Energy and Defense departments.

“The welfare of youth is directly affected by the failure of government to confront human-made climate change, and unless the government acts immediately to rapidly reduce carbon emissions ... youth will face irrevocable harm: the collapse of natural resource systems and a largely uninhabitable nation,” reads the complaint.

In addition to the federal suit, actions were filed in all 50 states, with help from Our Children’s Trust, an Oregon-based nonprofit that supports young people through legal efforts.

The scale of the campaign is unprecedented, according to law professor Mary Wood, faculty director at the Environmental and Natural Resources Law Program at the University of Oregon.

“Never before in the history of our laws have we seen a coordinated set of legal actions on this scale,” she said.

The monumental campaign matches the magnitude of the problem, supporters say.

"Because climate change is a recent phenomenon, there’s no precedent. Judges haven’t had to face the climate crisis." 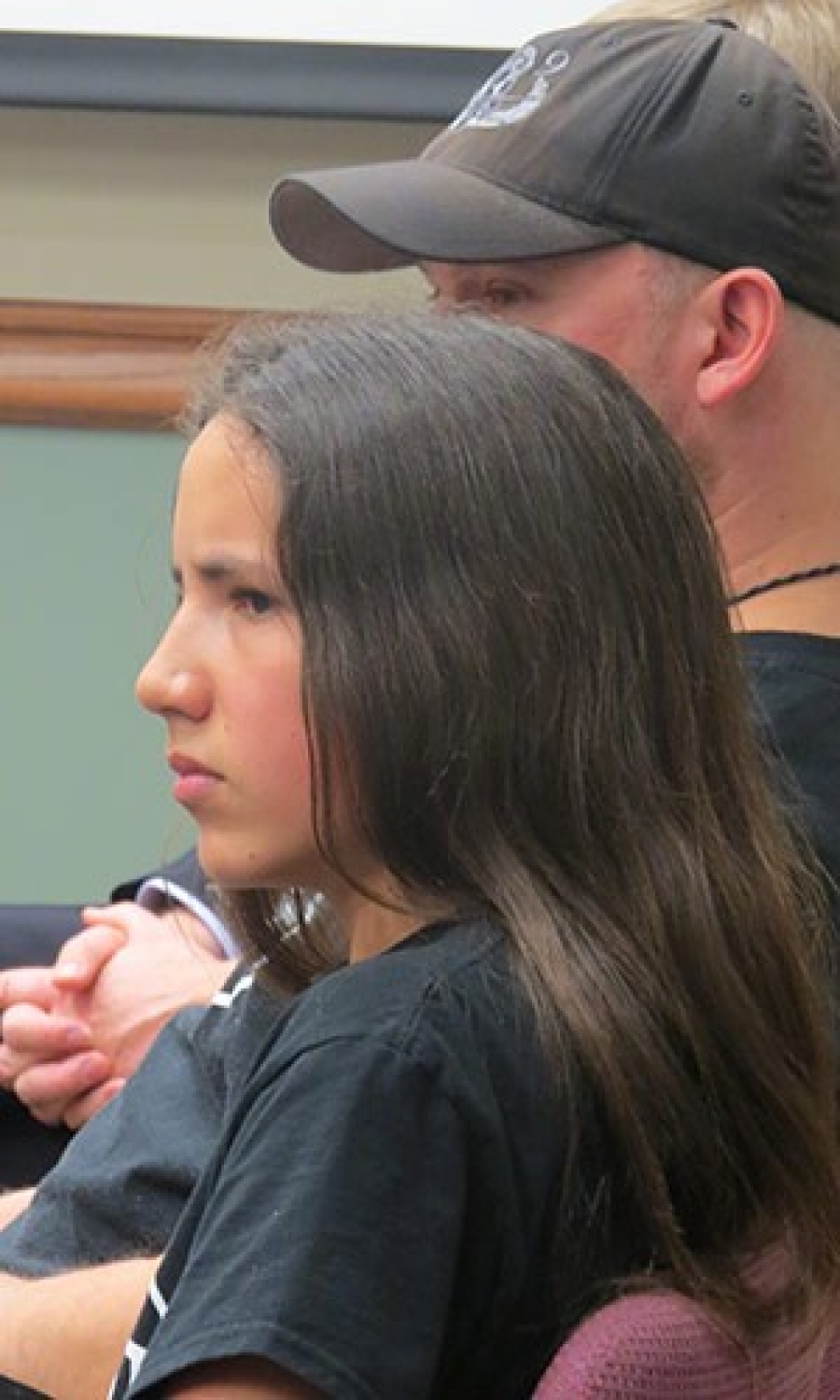 Xiuhtezcatl Roske-Martinez at a hearing.

Although many cases have applied the public trust doctrine to bodies of water, it has not yet been judicially applied to the climate system, a relatively new concern.

Wood says the logic behind protecting bodies of water also applies to air. “Both are essential resources for our survival,” she said.

But ATL is not a significant departure from how the trust doctrine is already applied, said Wood.

That science was readily supplied by the young defendants in their complaint.

“We want the government to reduce carbon emissions nationally by 6 percent every year until we get down to 350 parts per million,” Roske-Martinez said.

Those figures came from retired NASA scientist James Hansen, who provided the science undergirding the lawsuit.

Yet some critics argue that it’s not the role of the courts to legislate policy on climate change and that the task is properly left to the legislative and executive branches.

"This Congress doesn’t get to decide whether or not to protect our atmosphere, because that’s a fundamental right belonging to the people."

“This is not a political question. This Congress doesn’t get to decide whether or not to protect our atmosphere, because that’s a fundamental right belonging to the people.”

Grant Serrel, 17, a resident of Harrisonburg, Virginia, and plaintiff in the suit, told Al Jazeera that the outcome of the suit would have a direct impact on future generations of Americans.

“Our objective is to get urgent emissions reductions so we can protect the climate for future generations. If the government does not act now, we won’t be able to protect that right 10 years from now.”

“Instead of fighting us in court, [President Barack] Obama should work with youth to ensure a more sustainable future,” Serrel said. 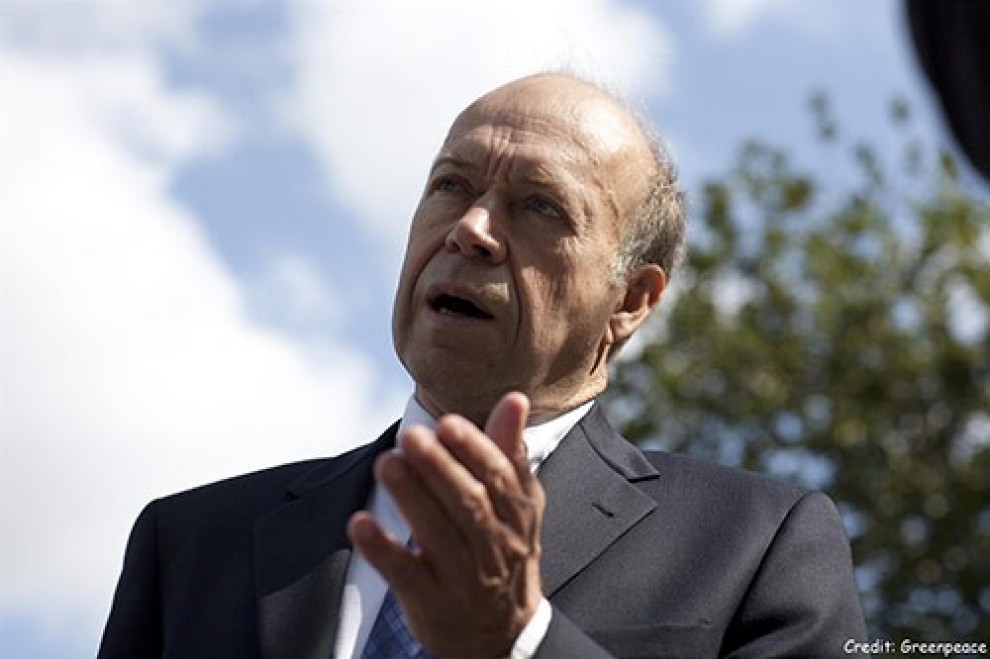 Hansen, who retired in 2013 to pursue political and legal efforts to limit greenhouse gases, worked with leading international climate scientists to develop a formula for carbon emission reduction geared toward restoring equilibrium to the climate.

“I agreed that I would write a scientific paper [for the plaintiffs] defining the requirements for stabilizing the climate to avoid disastrous consequences for future generations,” Hansen told Al Jazeera. “I wrote the paper defining what they need to ask for, after getting 17 of the best relevant scientists in the world to agree to work with me.”

His team found that the level of atmospheric carbon dioxide, or CO2, must be reduced to 350 parts per million (ppm) or less to avoid global catastrophe. In order to accomplish that, emissions would need to be reduced by 6 percent per year, he said.

That formula would stave off the deterioration of the planet into something significantly different from the one we know today, Hansen said.

Environmentalist Bill McKibben wrote that the simple, straightforward and “mind-blowing bottom line” may define our future. “Three hundred and fifty is the number every person needs to know,” he wrote in the Washington Post.

The United Nations’ top climate scientist, Rajendra Pachauri, concurs. The chairman of the Intergovernmental Panel on Climate Change endorsed a 350 ppm target in 2009. “What is happening — and what is likely to happen — convinces me that the world must be really ambitious and very determined at moving toward a 350 target,” Pachauri said in a 2009 AFP interview.

Climate scientists and environmental advocates are not the only ones sounding the alarm.

Former top military officers have been calling on the government to stabilize atmospheric changes for years, calling it an urgent matter of national security.

The CNA Corp., a nonprofit research organization, convened a military advisory board in 2006 consisting of retired three- and four-star officers to assess the impact of global climate change on national security.

The report concluded that the U.S. should commit to a stronger national and international role to help stabilize climate changes at levels that will “avoid significant disruption to global security and stability.”

But an EPA representative told Al Jazeera that the government already has a climate action plan in place.

“The EPA is making important progress in addressing climate change as part of President Obama’s June 2013 climate action plan. As part of that plan, the president called on EPA to reduce carbon pollution from power plants, the nation’s largest source,” the EPA representative said.

“The plan does not set science-based emission-reduction targets for climate recovery. The president’s stated goal of reducing emissions from 2005 levels by 17 percent by 2020 is not nearly enough to preserve a livable climate system,” Olson said.

Hansen said the plan has “disastrous consequences” for youth. “There is no real plan. On the contrary, he is allowing and even encouraging efforts to extract fossil fuels that are harder to get at and are more environmentally destructive,” he said.

"We have a say in the kind of world we are going to inherit."

“The fossil fuel industry has a vice grip on two branches of government through campaign financing. Two branches won’t act because it’s politically not in their interests, and that is why the judiciary must intervene,” she said.

For every $1 the fossil fuel industry spends on campaign contributions and lobbying, it gets back $59 in subsidies, according to Oil Change International, an environmental advocacy group.

The industry is so deeply entrenched in government, said Olson, that it has even joined as intervenors in the federal suit. “The National Association of Manufacturers asked the court’s permission to participate as co-defendants with the government. So they sit side by side with government, and they have argued that they have a right to pollute and emit carbon emissions.”

The National Association of Manufacturers did not respond to an interview request by the time of publication.

“It’s important that the youth of this country remind our representatives that their main purpose is to protect the people,” he said.

“We have a say in the kind of world we are going to inherit.”

This story has been updated to correct the name of the organization Earth Guardians, and Xiuhtezcatl Roske-Martinez's quote referencing the carbon emissions reduction goal of 350 parts per million.