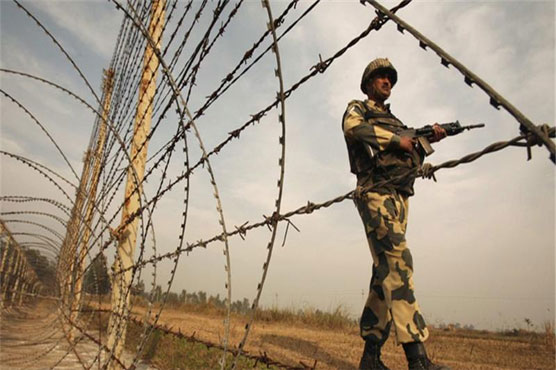 An Indian Border Security Force soldier patrols near the fenced border with Pakistan in Suchetgarh, southwest of Jammu in this January 14, 2013 file picture. REUTERS/Mukesh Gupta/Files

“A farmer in our border village knows exactly what to do in the face of exploding shells and bullets – but one really doesn’t have any idea how to deal with this drought"...

KEERNI, India, Jan 16 (Thomson Reuters Foundation) - The past three decades have not been kind to the residents of Keerni.

This village in the Poonch district of Jammu and Kashmir sits on the disputed Line of Control between India and Pakistan, and has seen people and cattle maimed or killed in the crossfire or by landmines.

Residents of Keerni's 750 mud-built homes also have had to deal with intensifying border conflict following India's strikes against purported terrorist camps in Pakistan-administered Kashmir in September.

Now the inhabitants of this village in the foothills of the Himalaya must grapple not just with heightened security threats but with a state-wide drought that is hitting them especially hard.

Experts say Jammu and Kashmir is reeling under the longest dry spell in a decade. Winter crops which would usually be sown by October or November cannot be cultivated this season in many areas of the state reliant on rainfall.

Sonam Lotus, director of the state's Meteorology Department, told the local press in early December that Jammu and Kashmir had been dealing with a dry spell since 2007 and it was unlikely to break anytime soon.

Isolated border villages such as Keerni, which lacks road connections, piped water, a school or a hospital, are among those worst affected by the drought.

"Since our area has not received any rains until now, our farms remain unploughed. We'll have to purchase food and fodder in the days to come," said farmer Mohammad Fakir.

Fakir said two factors are making it increasingly difficult to stay in the village.

"Farming is our only source of livelihood and rains have become highly unpredictable. Second, the frequent ceasefire violations keep disrupting routine life, and no one feels safe here," he said.

"In the wake of ongoing skirmishes, we couldn't harvest crops in time. Due to the delay, wild animals damaged a lot of our standing crop," he said.

Fakir said that he harvested 250 kg of maize and 30 kg of pulses from his half-hectare (1.25 acre) plot last season, only one-third of what he had anticipated.

In the past, water shortages were not an issue, he said.

"The village would get 2-3 feet snow every winter about three decades ago, and there used to be no drinking water scarcity all through the year. But the snowfall has reduced drastically over the past few years. Now the village sees only a few inches of snow annually," he said.

With no electric-powered flour mill in the village, the single water-powered mill has been struggling to meet demand as the flow of the stream declines. Villagers fear the mill may shut down due to lack of rain long before the stocks of grain to be milled are exhausted.

Fakir said the security situation makes things even more complicated than before.

"In the wake of border cross-firing, (the) very few remaining water bodies also become inaccessible to us and our cattle," he said.

People here are accustomed to the threats from ongoing border strife between India and Pakistan. In 2001, all Keerni's residents were evacuated from the village for security reasons.

When they were finally allowed to return to their rundown dwellings 10 years later, the village was virtually cut off from the rest of the country by a huge fence on one side, with landmines marking the Line of Control on the other.

Residents of Keerni say they must effectively cross a border in the form of the fence to enter their own country - a crossing allowed only during specified hours - to get access to basic facilities such as healthcare and education.

Fortifying the area ate up a large chunk of farmland and restricted access to resources such as water, residents say. What agricultural land remained also had degraded after being left uncultivated for almost 10 years.

Nazam Deen Mir, a local teacher with a monthly salary of 3,000 rupees ($44), said that during the drought the government should provide villagers with jobs quickly under the Mahatma Gandhi National Rural Employment Guarantee Act, a rural job scheme.

Otherwise, he said, "a majority of our men will have to leave their homes in search of alternative livelihood opportunities."

Citing drought affecting many parts of the country, Prime Minister Narendra Modi said in April that a "massive effort" would be launched under the rural employment scheme to improve water conservation and storage.

Some villagers already have left Keerni, along with their families, to work as labourers in the state's winter capital, Jammu.

But others sound increasingly hopeless about future.

"A farmer in our border village knows exactly what to do in the face of exploding shells and bullets whizzing by" said Khaleel Ahmed Mir, 22. "One can somehow cope with the loss of life, limbs and livestock. But one really doesn't have any idea how to deal with this (drought) situation."

Ashutosh Sharma is an independent journalist based in Jammu and Kashmir, India, who writes and reports on conflict, human rights, development, culture and environmental issues.