VLADIMIR PUTIN ONCE GAVE HIM A MEDAL. NOW DONALD TRUMP MAY GIVE HIM THE STATE DEPARTMENT... 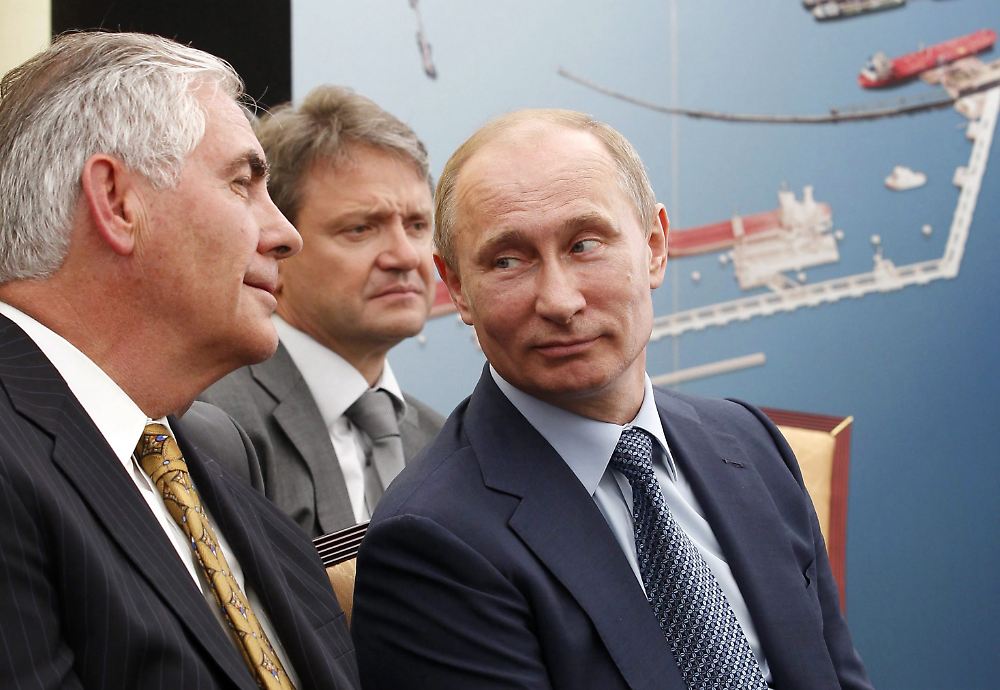 Such is the life of Exxon CEO Rex Tillerson, a man who earns over $30 million a year running Exxon-Mobil, the largest US oil company...

By early 2017 he could be swopping the hydrocarbon industry for Foggy Bottom, the new face of American foreign policy.

As news broke late Saturday and into Sunday – US news agency NBC had the exclusive – predictable howls of outrage from green groups followed.

This after all a man who says we’ll need the oil of five Saudi Arabias by 2040, enough to bust goals to limit warming to below 2C.

Ironically, the oil magnate could end up being the only one in Trump’s cabinet to have endorsed the Paris Agreement, describing climate change as a “serious” issue that “warrants thoughtful action”.

But his company is widely seen as a laggard when it comes to facing up to what that means for fossil fuel development. Exxon is facing a legion of lawsuits, accused of failing to disclose the risks climate change poses its business and sowing disinformation.

“If the nomination comes to fruition it would set the stage for a public trial where Tillerson would be grilled under oath. Exactly what climate orgs want,” wrote campaign group 350.org in a press release sent on Sunday.

Which officials have attended climate summits, what programmes run by the department are essential to the Obama climate plan and who’s on point for the Clean Energy Ministerial meetings?

Those are among the 75 questions sent by the Trump transition team to the US Department of Energy – leading a few to speculate any US official who has attended a UN climate summit will face the axe after January 2017.

A G20-backed study from the Task Force on Climate-related Financial Disclosures will recommend on Wednesday all companies come clean on the risks a warming world pose their business.

Chaired by Bank of England chief Mark Carney, the 30-strong panel of leading financial experts will detail a set of voluntary recommendations for business to follow in 2017 and beyond.

Carney has banged the drum on climate risk for some time. In a 22 September speech he touched on the physical, liability and transition risks from ignoring the potential impacts of climate change.

“Changes in policy, technology and physical risks could prompt a reassessment of the value of a large range of assets as costs and opportunities become apparent,” he said. In shorthand: if you’re into oil, gas or coal, that’s no longer a safe bet.

Aviva’s Steve Waygood – a member of the FSB panel – has spelled out what he wants to see from business and investors to lower the potential transition risk.

“We believe asset owners should ask for information on how their asset managers integrate climate risk into their investment process across all asset classes, including security selection, portfolio construction, and portfolio risk management,” he writes in a report.

Here’s another panel member – Mark Lewis from Barclays – talking in the Economist: “If measures to stop global warming are fully implemented, oil-company revenues could fall by more than $22trn over the next 25 years, more than twice the predicted decline for the gas and coal industries combined.”

Canada has a carbon price

This was announced late Friday after a meeting between prime minister Trudeau and provincial leaders. Eight of the 10 provinces have signed up (Saskatchewan and Manitoba declined) to an initial price of US$10 a tonne of CO2.

“Taking traditional coal power out of our energy mix and replacing it with cleaner technologies will significantly reduce our greenhouse gas emissions, improve the health of Canadians, and benefit generations for years to come,” said environment chief Catherine McKenna.

The board of the UN’s Green Climate Fund gathers in the Samoan capital of Apia this week to map out a way forward, amid fears it’s not delivering on its mandate to generate a “paradigm shift” in green energy and climate resilience investments.

So far, the GCF has awarded more than US$1 billion to 27 projects but only a tiny amount has been disbursed, documents show. In addition it’s looking unlikely the new Trump administration will deliver the extra $2.5 billion of support the US promised under Barack Obama.

According to a briefing note ahead of the meeting, the GCF board will ‘focus chiefly on thorough and meaningful consideration of funding proposals’.

Zaheer Fakir, a South African government official who’s one of the board co-chairs, says the fund performance has “rapidly improved” in 2016.

He cites the approval of “over USD 1 billion so far for mitigation and adaptation in developing countries, more than doubled the number of Accredited Entities we partner with, and our pipeline of proposals continues to grow in volume and ambition.”

Still, green groups are not impressed – as the letter attached illustrates.

As we reported last week (ok – the headline was a tad tongue in cheek) there’s a secret climate summit taking place in Mexico: the biannual Convention on Biological Diversity.

We’re expecting the UN to formally extend a mini-freeze on large-scale geoengineering projects [latest text here] while discussions on ensuring farming can be more climate resilient and respect ecosystems are also ongoing.

Find a list of all documents under discussion here.

-Immediately stopping any new investments in companies who derive more than 5% of their revenue from coal, oil and gas
-Dropping coal, oil and gas from its investment portfolio by divesting from these fossil fuel companies within five years
-Publicly communicating the foundation’s commitment and regularly reporting on implementation of its progress
-Committing to and prioritising reinvesting the majority of its portfolio into climate solutions that support renewable energy, clean energy access and energy efficiency, and community adaptation and resiliency.