WAKE UP THE SENATE TO THE #DirtyEnergy Bill...

We've already called, written and spoken out,1 but a Senate vote on bad energy nominees and legislation could come any day now. And frankly, we're not in a good position to win.

The contrast is striking: Last week every single Democrat and three Republicans in the Senate stood together and blocked a health care repeal that would have cost 16-33 million people their health insurance. But on the issue of climate change, which will affect at least as many people, and with a similarly dis-proportionate impact on communities of color, low wealth Americans and the most vulnerable, the opposition is scattered and leaderless. That needs to change, right now. We need to send the Senate a wake up call on climate change.

One other big distinction between climate change and health care debates was the presence of dozens of people protesting in the hallways of the Senate, backed up by thousands of people writing and calling their Senators to demand they vote no. So this week, we're going to try and replicate a little bit of that strategy, and I need your help.

Sign here to tell your Senator to vote NO on McConnell's #DirtyEnergyBill! 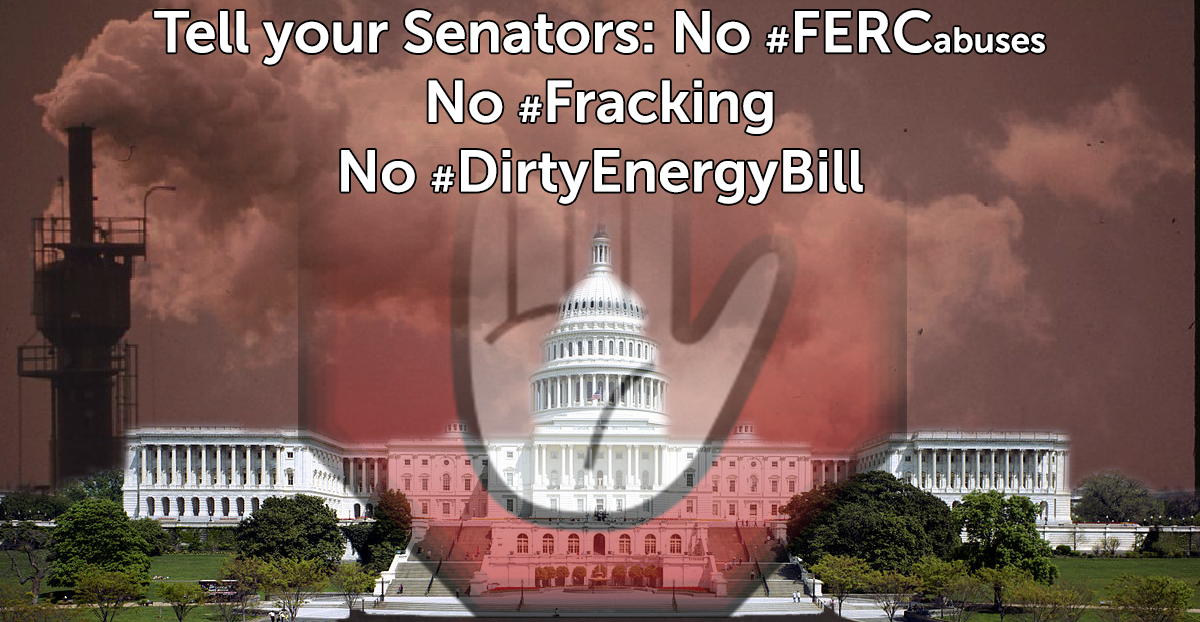 The need for a united front on climate change is plain to see: Trump's pulled out of the Paris climate accords and turned the entire Executive Branch into a subsidiary of the oil and gas industry.2

And the only two pieces of energy legislation likely to get a vote anytime soon would re-animate the Federal Energy Regulatory Commission (FERC) and dramatically expand FERC's powers and the reach of the US oil and gas exports with the Dirty Energy Bill. These are both climate disasters, and they're closely linked because pro-fossil fuel lobbyists and legislators in Congress have decided to consolidate power in FERC.3

Like most disasters in this Senate, they're out of regular order too. Trump's nominees would stack FERC with pro-fossil-fuel Republicans without even giving a hearing to a Democratic Nominee. And this Dirty Energy Bill, which is hundreds of pages long, has never had a committee hearing or been subject to amendments.4

McConnell and the Trump team are trying to jam through votes on deeply-unpopular legislation that would hurt millions of Americans, using a top-down process that subverts the Senate's regular order. So where's the opposition? So far only Sen. Bernie Sanders of Vermont has voted against the FERC nominees and called for opposition to the #DirtyEnergyBill.5

This despite the fact that 56% of Americans say climate change is serious threat to our health and safety6 -- that's a majority big enough to take back Congress or elect a President (absent outside influence or gerrymandering). Clearly, what the Senate (and especially Democratic leadership) needs is a wake up call -- a clear and unequivocal demand, like we saw on health care, that they stand up for us and not the corporations.

This isn't a hopeless or quixotic action. Unlike health care, McConnell will need 60 votes to advance the energy bill, and FERC nominees can be blocked or held by a variety of procedural motions. If even a handful of Senators are willing to stand up and fight for our climate the way they did for health care, we can stop these votes.

It won't be easy - but this IS a fight we can win. To do so we all need to unite the opposition and demand they vote in accordance with their promises to #ActOnClimate.

I'm ready to go to the Senate this week with friends and hand deliver the message by sitting in and speaking out in the halls of the Senate. But I need YOU to back me up with a signature first. Can you help?

Click here to tell your senators: VOTE NO on Mitch's Dirty Energy bill!

Drew and the 198 reasons climate is the new healthcare crew