WALRUSES FACE 'DEATH SENTENCE' AS TRUMP ADMINISTRATION FAILS TO LIST THEM AS ENDANGERED... 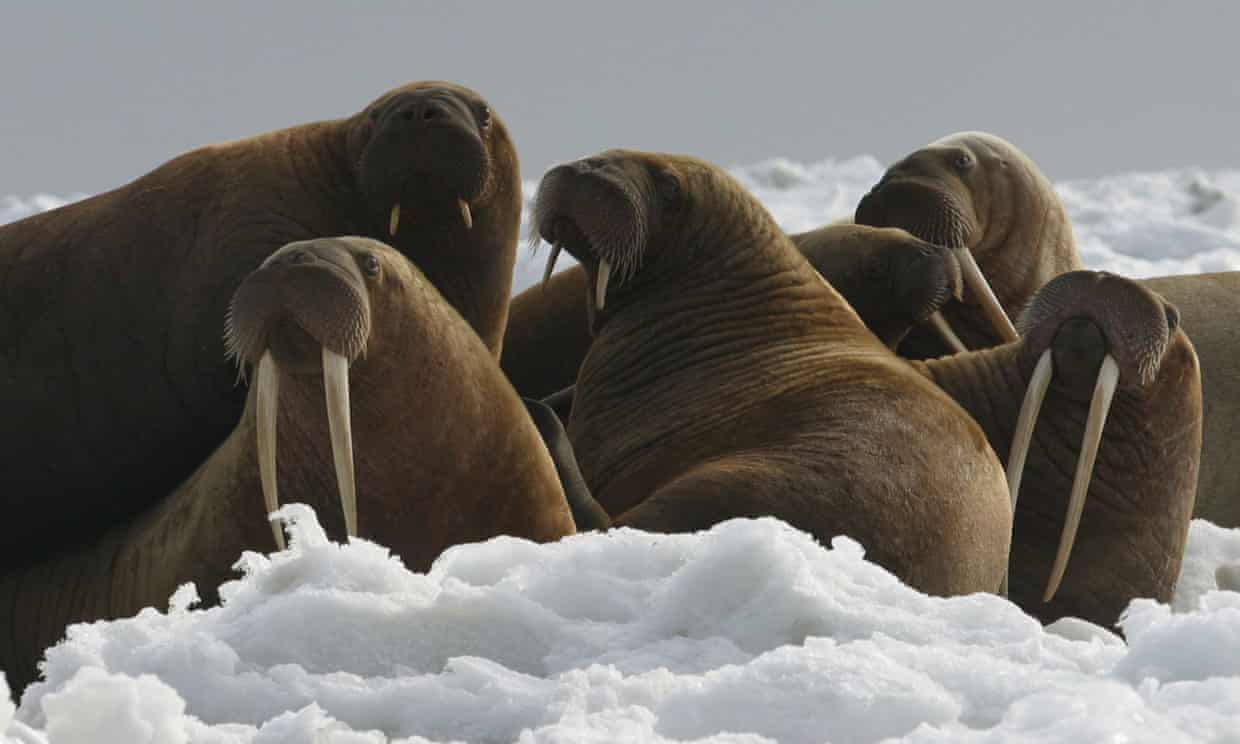 Pacific walrus cows and yearlings rest on ice in Alaska. ‘At this time, sufficient resources remain to meet the subspecies’ physical and ecological needs now and into the future,’ US officials said. Photograph: Joel Garlich-Miller/AP

Fish and Wildlife Service decides Pacific walrus may be able to adapt to loss of sea ice and is unlikely to be seen as endangered ‘in the foreseeable future’...

The Trump administration has declined to list the Pacific walrus as endangered after deciding that the huge tusked mammals may be able to adapt to the loss of the sea ice that they currently depend upon.

The Fish and Wildlife Service (FWS) said that the walruses were unlikely to be considered endangered “in the foreseeable future”, defined as from now until 2060, adding: “At this time, sufficient resources remain to meet the subspecies’ physical and ecological needs now and into the future.” 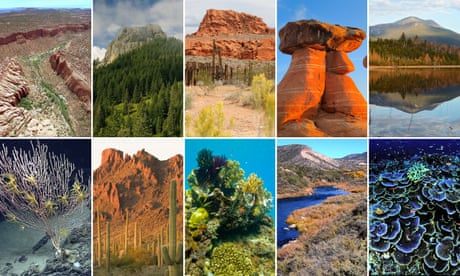 Although the federal agency acknowledged the species was facing “stressors” from climate change – primarily the decline of sea ice, ocean warming and ocean acidification – it said the population was currently stable and could possibly adapt to the changing environment.

The decision wipes out a FWS finding in 2011, under Barack Obama’s administration, that the walruses were imperiled by climate change and should be protected under the Endangered Species Act. A listing didn’t take place at the time because the agency considered other at-risk animals to be of greater priority.

The Center for Biological Diversity, a conservation group that launched legal action to get Pacific walruses listed in 2008, said the decision could doom the species.

“This disgraceful decision is a death sentence for the walrus,” said Shaye Wolf, climate science director for the center.

“Walruses face extinction from climate change, and denying them critical protections will push them closer to the edge. The Trump administration’s reckless denial of climate change not only harms the walrus and the Arctic, but puts people and wildlife everywhere in danger.”

Pacific walruses, which are found in the Bering and Chukchi Seas that abut Alaska, are one the largest flipper-footed marine mammals in the world, with males weighing as much as 2 tons. The animals feast upon clams, mussels and the occasional seal, with males asserting dominance through lumbering clashes that involve their tusks and sheer brawn.

The animals rely upon sea ice for breeding, feeding and nursing their young, and a place to evade predators.

However, the Arctic region is heating up at twice the rate of the global average, causing a steady decline in sea ice. The loss of summer sea ice in the Chukchi Sea is putting increasing pressure on walruses, at times pushing them ashore where they have limited food options and are more vulnerable to predators.

Young walruses can also be trampled to death when large numbers of the animals have to congregate on land. Last month, an estimated 64 walruses, most of them less than a year old, were found dead near Point Lay in Alaska. An even larger “haul out” of walruses at Point Lay was documented in 2015.

Scientists have predicted the Arctic will be devoid of sea ice in summers by the 2030s. Data released last month showed that the minimum sea ice extent was 1.79m sq miles at the end of this year’s summer, around 610,000 sq miles below the long-term average and the eighth-lowest year in the 38-year satellite record.

In 2008, the loss of sea ice was deemed sufficient reason for the FWS to list the polar bear as a threatened species. A study published last year found that a third of the world’s polar bears, which currently number about 25,000, could be lost within the next 40 years.

The FWS tentatively estimates there are around 283,000 Pacific walruses left, although it warns this number should be used with “extreme caution” due to uncertainty over the exact population of the species.

But the agency said that while it was certain that sea ice would continue to be lost, with detrimental consequences for walruses, there was no justification to list the creatures as endangered.

“While the Pacific walrus will experience a future reduction in availability of sea ice, resulting in reduced resiliency and redundancy, we are unable to reliably predict the magnitude of the effect and the behavioral response of the Pacific walrus to this change,” the agency’s assessment read.

The decision was welcomed by Alaska’s elected Republicans. “There are often numerous unintended consequences associated with new ESA designations, including those that undermine stewardship done at the state, local and tribal level and ignore the needs and first-hand knowledge of local communities,” said the US congressman Don Young.

“We’ve seen it before, where field-tested and empirical data was ignored in favor of the environmentalist agenda to limit resource development in Alaska. I’m glad to see that didn’t happen this time.”

The FWS also announced it would not provide endangered species protections to a host of other assessed creatures, including the Kirtland’s snake, the black-backed woodpecker, Barbour’s turtle and the Great Sand Dunes tiger beetle.

The agency will, however, move to list the trispot darter, a tiny fish that lives in waterways in Tennessee, Georgia and Alabama.

The decisions came as the Republican-controlled House natural resources committee considers five bills that would refashion the Endangered Species Act.

The pieces of legislation would, among other things, remove gray wolves from protected status in the Great Lakes states and Wyoming, strip safeguards from all non-native species within the US and enable the FWS to deny protections for a species if there is an economic cost to the safeguards.