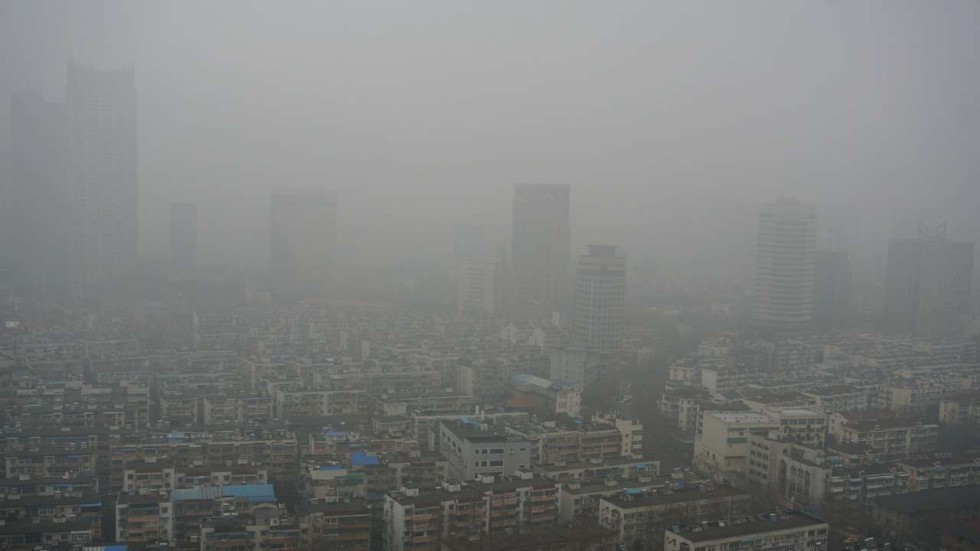 Heavy smog on Saturday in Nanjing, Jiangsu province. Photo: Reuters
Changes to climate weaken the winds that can blow pollution away, meteorologists say...

Global warming will lead to more smog in northern China, according to mainland meteorologists.

While pollutants discharged from factories were the key to air pollution, climate change was making it worse, Liu Hongli, a deputy researcher with the Chinese Academy of Meteorological Sciences, told China Youth Daily.

Ai Yuanxiu, a scientist at China’s National Climate Centre, was quoted by the newspaper as saying that the climate conditions in areas around Beijing would be “increasingly unfavourable” for pollutants to disperse.

“In short, smog will become more severe and frequent in the winter,” Ai was quoted saying.

Smog is a serious problem for northern China, especially in Beijing, Tianjin and neighbouring Hebei province. Beijing’s skyline is lost in the smog on Saturday. Photo: Reuters

Ai said warmer weather had narrowed the temperature difference between northern and southern China, making it harder for cold air to move southwards and weakening winds that could blow the pollutants away.

The areas with the highest levels of smog were mainly concentrated in the northern part of the country, according to Ai.

She said the smog was the result of a heavy concentration of industry in the area and the coal-fired heating of homes and workplaces during the cold winters.

Ai said the speed of the wind passing through the Beijing-Tianjin-Hebei region dropped 37 per cent between 1961 and now,

according to data from the centre. Boarding a train in the choking air in Bozhou, Anhui province. Photo: Reuters

She said the trend became especially apparent at the end of last year, when Beijing saw wind speeds 20-27 per cent lower than during the same period the year before.

In the report, Ai also said the atmosphere had become less capable of oxidising polluting chemicals – a process that changes them into less harmful substances.

From October last year, the level of PM2.5 – the fine particulate matter that is hazardous to health and often found in smog in China – hit a daily average level of 129 milligrams per cubic metre in the capital region.

The World Health Organisation’s recommended safe level of PM2.5 is 25 per cubic metre over a 24-hour period. Liu from the meteorological academy was quoted as saying that the correlation between smog and local weather had been found to be 77.7 per cent, meaning weather conditions were the main cause of smog.

“The pollutants emitted into the atmosphere decide the pollution level, but the formation of smog is largely dependent on the weather,” Liu said.

Kinling Lo
Tuesday, 07 February, 2017, 10:01am
source: http://www.scmp.com/
original story HERE
New Climageddon book: Click here for Information on the new Climageddon book about the global warming emergency and what you can do.
Share Blog Post: If you would like to share this blog post on Facebook or in other ways go back to the original short version of this blog posting and look to lower right for the large green Share button.
Get Global Warming Blog RSS Feed: Sign up for free Global Warming Blog RSS feed by clicking here.
Sign Petition: Sign petition to declare an international global warming State of Emergency, click  here!
To see our: most current positions, opinions, comments, agreement or disagreement with this article, and/or possible criticisms related to the subjects or facts in the above article, click here.