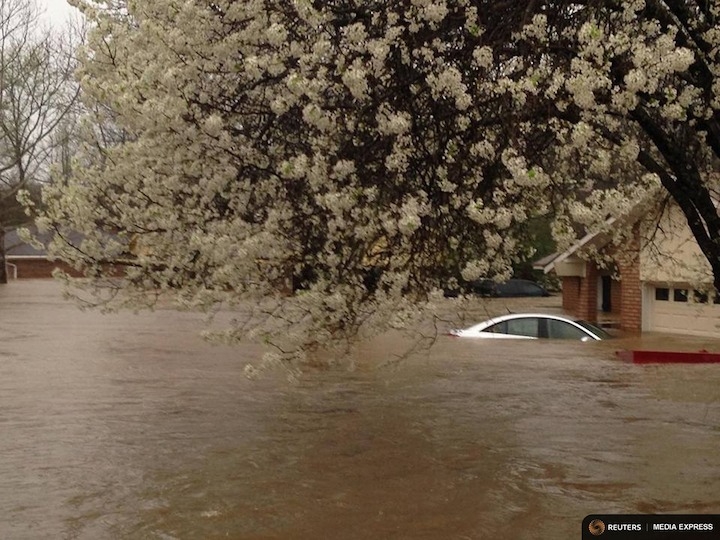 Rising temperatures could make extreme rainfall events occur up to five times more often across the US and drop up to 70 percent more rain...

When the skies open up and deluge an area, the results can be catastrophic, with roads washed out and homes destroyed by the resulting flash floods. Such extreme downpours are already occurring more often across the U.S., but a new study finds that as global temperatures rise, storms could dump considerably more rain and skyrocket in frequency.

The study, detailed Monday in the journal Nature Climate Change, suggests that storms that now occur about once a season now could happen five times a season by century’s end, a 400 percent increase.

And when such storms do occur, they could produce up to 70 percent more rain. That means that an intense thunderstorm that would today drop about 2 inches of rain would drop 3.5 inches in the future.

Such massive amounts of rain occurring more often could put significant strain on infrastructure that already struggles to deal with heavy rainfall, as seen across the country this year in places from Louisiana to West Virginia.

“I think this is one of the most severe consequences of climate change, at least in the U.S.,” study co-author Andreas Prein, of the National Center for Atmospheric Research in Boulder, Colo., said.

Heavy downpours have already increased across the entire continental U.S., according to the 2014 National Climate Assessment, mostly notably in the Northeast, where they have risen by 71 percent.

Such an increase in extreme precipitation is expected as temperatures rise due to heat-trapping greenhouse gases accumulating in the atmosphere. One of the basic properties of the atmosphere is that moisture increases with temperature. That means when a storm forms, it has more moisture available to fuel rains.

Several extreme rainfall events have already been made more likely because of warming, analyses have shown.

“We see this in the real climate already. It will only intensify,” Prein said.

The most extreme rains happen in convective storms, or ones that feature rapidly rising air at their core. These storms happen on scales too small for global climate models to capture, though, meaning they can’t provide a detailed look at rainfall trends.

To get down to the level of those storms, the NCAR researchers used a higher-resolution model that captures finer details, but takes much longer to run — in this case, an entire year. 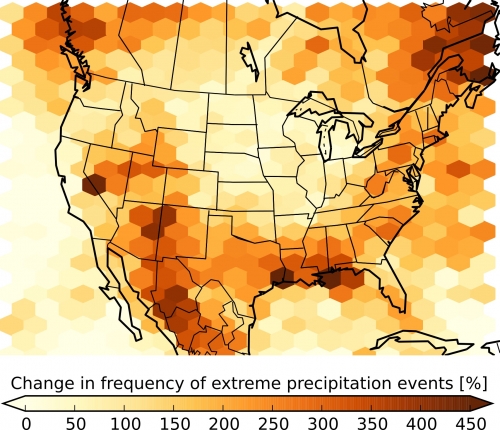 This figure shows the expected increase in the number of summertime storms that produce extreme precipitation at century's end compared to 2000-2013.
Click image to enlarge. Credit: Andreas Prein, NCAR

What they found was that if greenhouse gas emissions continue on their current path, the storms that produce the most intense rainfall will increase broadly across the Lower 48.

The Gulf and Atlantic coasts, where oceans provide abundant moisture, would see some of the biggest increases in frequency and rainfall amounts.

But even in the central portions of the country, which are expected to get drier overall as rising temperatures cause more soil evaporation, the most intense storms will drop more rain in the future. Essentially, the region will see fewer of the moderate storms that are a crucial source of water now and more of the intense storms.

That shift has serious implications for agriculture, one of the main economic drivers in the region, as heavy rains can be damaging to crops.

However, if the world, including the U.S., acts to limit emissions over the coming decades, these increases in rainfall won’t be as large.

“It’s really in our hands to change that if we want to,” Prein said.

You May Also Like:
U.S. Oil Exports Skyrocket Despite Climate Pacts
Extreme Tornado Outbreaks Are Becoming More Extreme
Odd Rifts in Antarctic Ice Could Mean ‘Sayonara, Glacier’
What You Should Know About Trump’s Cabinet & Climate