WE MAY BE CLOSER THAN WE THOUGHT TO DANGEROUS CLIMATE THRESHOLDS... 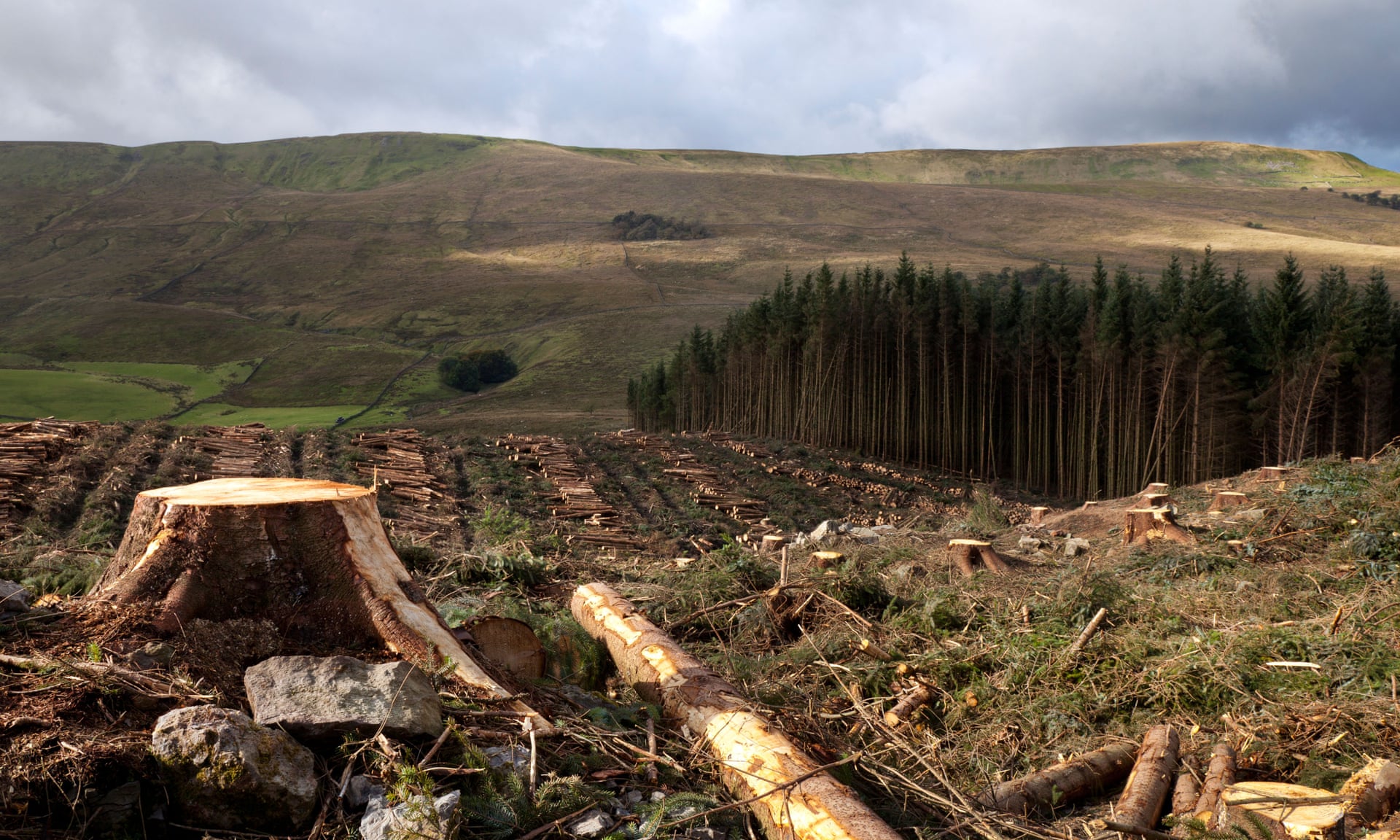 The felling of commercial forests in the North Yorkshire Dales, National Park, UK. Land use change like deforestation was a significant early human contributor to global warming. Photograph: Mar Photographics/Alamy

A new study identifies an extra 0.1°C of human-caused warming...

We don’t want the Earth to warm more than 1.5–2°C (2.7-3.6°F) compared to the pre-industrial climate. These targets are not magical; they are expert judgements about what it takes to avoid some of the more serious effects of climate change. We know the seas will rise (they already are). We know droughts and flooding will get more severe (they already are). We know there will be more heat waves, more intense storms, and ocean acidification (all happening now). We cannot stop some of the changes. But if we keep climate change to these limits, we think we can avoid the worst effects.

Where did these targets come from? Well, I mentioned that they are expert judgements but they are based on science. For instance, we can look into the deep past using ice cores, sediment records, and other tools to see how the past climate changed. We can also look into the future with computer models to predict how the future climate will evolve. Through these tools we can get a sense of how large the impact is if temperatures rise.

The obvious question is, where are we at? How much have temperatures risen since the pre-industrial time period? It might seem like that is a simple question. In fact, groups like NASA in the USA regularly provide temperature data as below. According to this image, the 2016 temperature increase has just hit 1°C (1.8°F). So, it would appear that we have some ways to go before hitting our target, right?

Not so fast. Whenever you see an image like the one below, you should ask what years are the baseline. These graphs are termed “temperature anomaly plots.” They don’t show the actual temperature; rather they show the temperature difference between two time periods. It turns out the figure below is oriented so that it is relative to the time period 1951-1980. So when we say that 2016 had a temperature anomaly of 1°C, we really mean that it was 1°C warmer than the 1951-1980 time period. 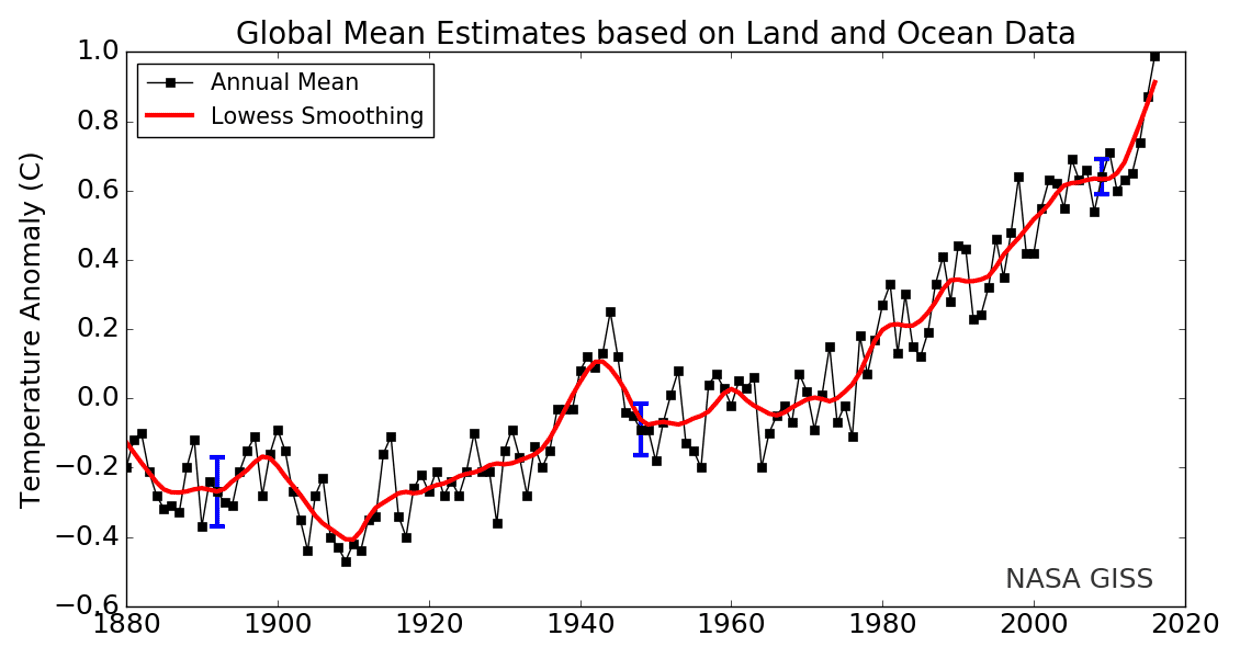 A study just out in the Bulletin of the American Meteorological Society tackles this question head on. In this article, lead author Dr. Ed Hawkins from the University of Reading and an international team of colleagues take into account many climate records that date back decades and centuries. Based on their analysis, they determined that the period 1720-1800 is the best selection for “pre-industrial.”

Prior to this publication, some choices were made based on expediency. For instance, in the latest IPCC report, the global reference period was 1850-1900 because it was thought that high-quality records could go back as far as 1850. However, some warming had already occurred by 1850. For instance, greenhouse gases were already being emitted then. Perhaps more importantly, humans had already changed the landscape through practices such as farming and animal husbandry. These land changes can affect temperatures as well. By using 1850 as a start date, you miss these changes and underestimate the total change in the global climate.

The authors considered a number of issues when selecting their recommended period. First, they attempted to select a period prior to significant global warming – before many greenhouse gases and land changes occurred. Second, it would be best to have a choice that didn’t have natural forcings (natural climatic changes such as volcanoes, significant solar changes, and so forth). Using three different analysis methods, the authors are able to conclude that from their pre-industrial time to the 1986-2005 period, there was a likely global temperature increase of 0.55–0.80°C (1–1.4°F).

When you use the recommended time period, it turns out that 2015 was the first year on record that passed the 1°C (1.8°F) mark. It means that 2016 was approximately 0.1°C (0.2°F) warmer than we had thought relative to the pre-industrial time period. To put this in perspective, it is almost an extra decade of warming.

Why does this matter? Well it means that we have about a decade less time to act on climate change if we are going to avoid the most serious consequences. It means we simply have no time to waste, and no room for error. It also means that even if we take action right now, there will be consequences. That said, it is better in the long run to act now than to wait. The people denying or delaying action are costing us, and our future generation much in terms of financial, social, and human capital.

Dr John Abraham is a professor of thermal sciences. He researches in climate monitoring and renewable energy generation for the developing world. His energy development work has extended to Africa, South America and Asia