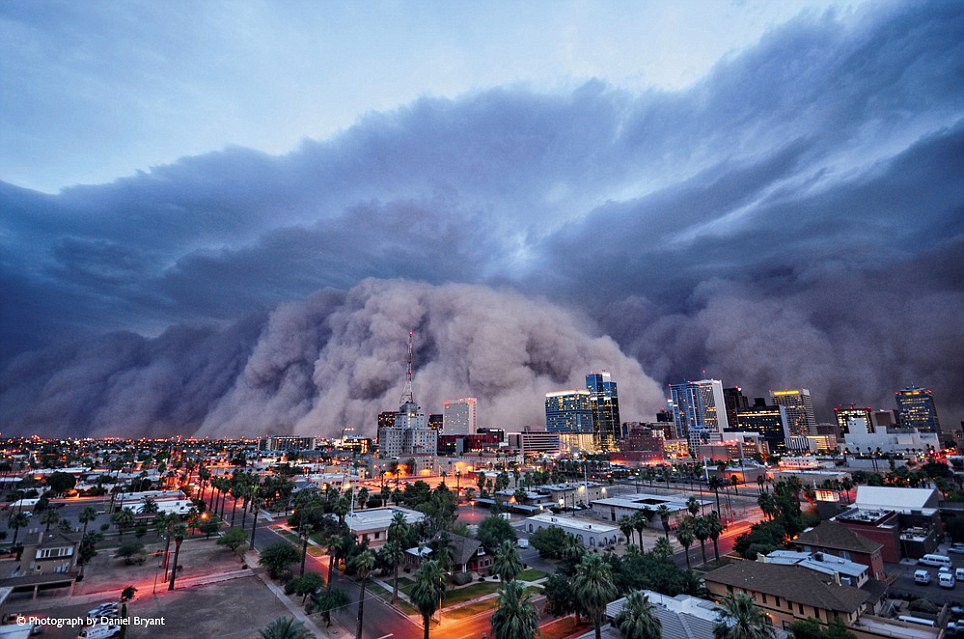 The biggest dust storm in living memory rolls into Phoenix on July 5, 2011, reducing visibility to zero. Desert thunderstorms kicked up the mile-high wall of dust and sand. Photograph by Daniel Bryant

Breath-taking photographs of wild weather conditions plaguing areas across the United States in 2011 have showcased the untamed hand of Mother Nature...

The apocalyptic collection of images, published in the September 2012 issue of National Geographic magazine, captures ‘rains that are almost biblical, heat waves that don't end and tornadoes that strike in savage swarms,' summing up what was a truly incredible year of extreme weather systems.

Well-placed photographer Daniel Bryant was in the Valley of the Sun in July 2011 to capture the massive dust storm that descended upon the Arizona capital of Phoenix.

The tempest of historic proportions rolled through the city as residents scrambled for cover and thousands were left without power in the scorching desert heat.

Severe droughts in the Lone Star State were described as 'gut-kicking even by Texas standards’ and photographer Robb Kendrick depicted the devastation of the rainless region in his spectacular collection of images.

Dubbed the ‘New Dust Bowl,’ the epic dry spell was judged to be even more severe than the extreme drought of the 1950s, with Texas farmers losing an estimated $8 billion due to the lack of rain in 2011.

Gusting winds fling dirt from barren cotton fields onto Farm to Market Road 303, near a small community called Pep. Parts of West Texas saw next to no rainfall in 2011. Photograph by Robb Kendrick 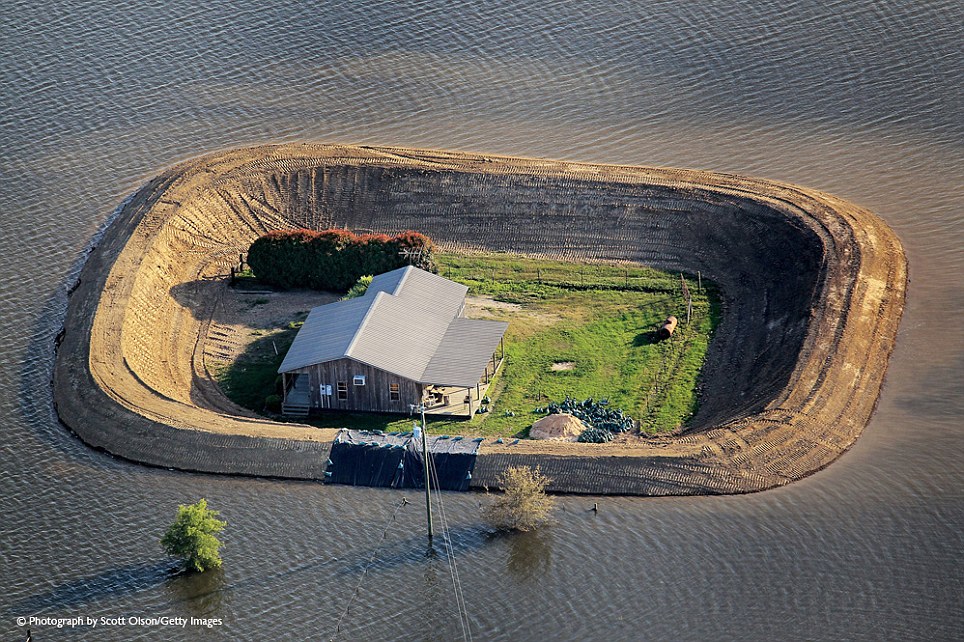 Fortified by a levee, a house near Vicksburg survives a Yazoo River flood in May 2011. Snowmelt and intense rains, eight times as much rainfall as usual in parts of the Mississippi River watershed, triggered floods that caused three to four billion dollars in damages. Photograph by Scott Olson

But the wild weather conditions were not limited to dust storms and droughts.

In May 2011, melting snow and rainfall eight times the normal level caused the Mississippi River to break its banks, devastating the area and resulting in an estimated $4 billion of damage to local homes and businesses.

Photographer Scott Olson was there, capturing awe-inspiring images of the deluge from above.

For a separate National Geographic photo spread, titled 'Chasing Lightning', photographer Carsten Peter followed storm tracker Tim Samaras as he tempted fate to get as close as possible to powerful lightening bolts around the U.S. 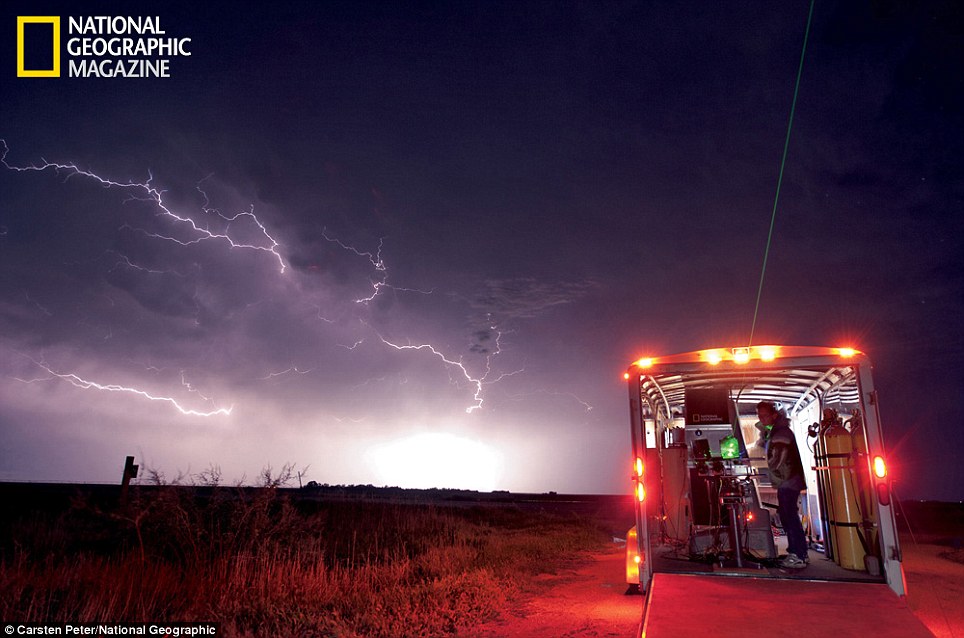 As he waits for a wave of thunderstorms to form along Colorado's Front Range, Samaras readies the 1,600-pound camera he calls the Kahuna. Photograph by Carsten Peter 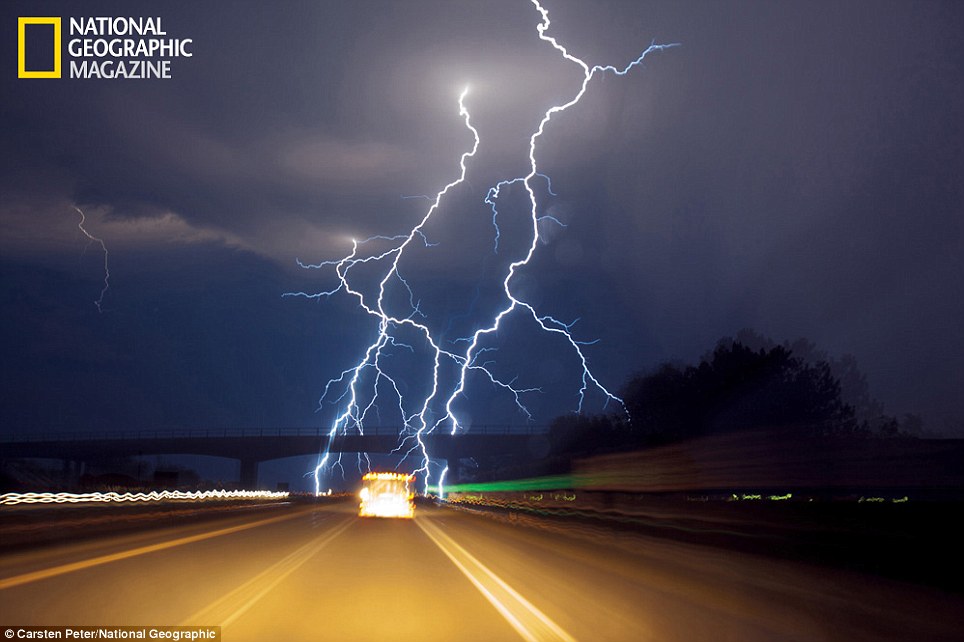 Back on the highway with the Kahuna in tow, Samaras hunts for the elusive shot. This summer he's on the chase again, with new, nimbler equipment. Photograph by Carsten Peter 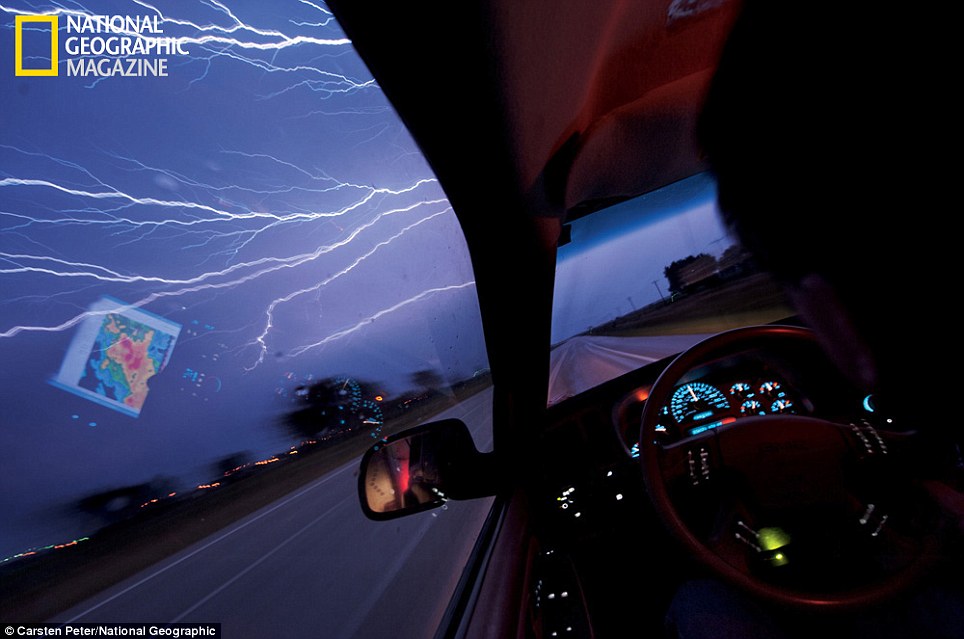 Guided by the laptop weather map reflected in his window, Tim Samaras rushes to catch up to a dying thunderstorm. He hopes to be the first to photograph the split-second event that triggers a lightning strike. Photograph by Carsten Peter

‘My passion for storm chasing has always been driven by the beautiful and powerful storms displayed in the heartland each spring,’ Samaras explained.

'Chasing Lightening' appears in the August 2012 edition of the National Geographic magazine. 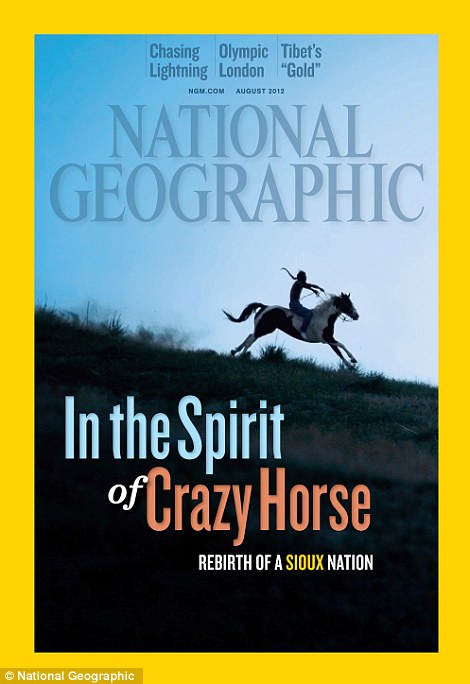 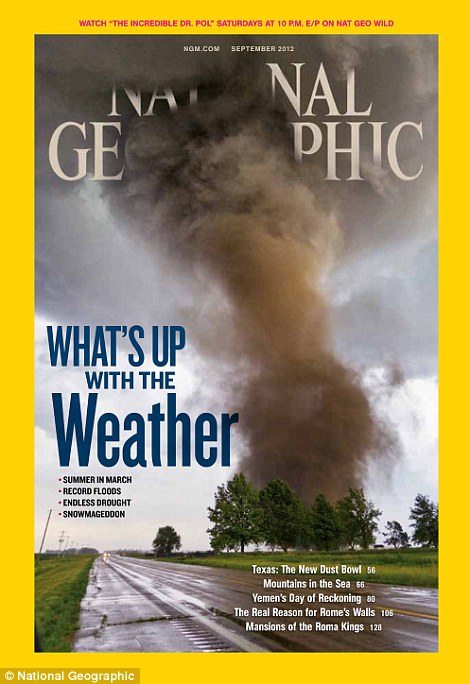 The Chasing Lightning collection of photos appears in the August 2012 edition of the National Geographic magazine. The September 2012 issue of the magazine, which hits stands August 28, will include the Wild Weather photo spread...